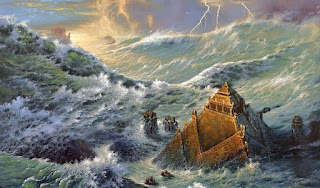 In the Beginning, all was Good.  The Gods and Elementals frolicked, making beautiful things and living in splendid, perfect union with each other and with the mortals, of which their were two.  In those days, all followed the LAW perfectly, so there was only one sin: do not bathe in the Water of Truth.  But while the Gods were having a party, one of their number slipped away and approached the mortals while they were separated from the Gods.

This Deceiver God told them that while they had been told that bathing in the Water of Truth was a sin, this was because the Gods and the Master did not want the mortals to know the truth.  The mortals, intrigued by this, decided to ignore the prohibtion and see if what the Deceiver said was true.  They entered the Water, to see what was going on.

But the Water, which resembled a small pool, was actually much deeper, leading to a vast, endless ocean beneath the land.  The mortals swam down, looking around, and with their splashing, they disturbed the rest of the Great Dragon-Goddess Isfet, who had been struggling to sleep with all the noise from the God's partying.  Finally having been disturbed, the Goddess woke to find herself consumed by a terrible rage.  She devoured the mortals before her, tearing them to pieces, but this did not sate her.  So she decided to destroy the Gods and all their creations, so she could rest peacefully once more.

Thus, did the Dragon-Goddess begin her work.  She quickly transformed herself into the mortal woman she had just devoured and went up into the World.  There she lured aside one of the God named Quino and asked him for help.  When Quino was alone with her, she dragged him into the ocean beneath the land.  At first, Quino struggled against her, but as he fought her, he began to admire her strength.  When she told him of her plans, first in screamed threats, then in quiet whispers, he began to see the wisdom in them.  He too had begun to despise the God's parties and noise-making.  So he agreed to help the Dragon-Goddess.  He and Isfet lay together and she bore him 10 children, each one more vicious than the last.  Then, once her children were grown, they stormed up into the world and attacked, bringing the waters of the ocean with them.

This initial assault was so vicious that it swept aside any resistance, scattering the Gods.  The party-goers tried to fight, but Quino's sons tore them to shreds.  And what could stand up to them could not stand up to Quino, and what could stand up to him could not stand against Isfet.  Soon, Isfet's armies and the flood-waters that followed them covered the whole earth, and the surviving Gods cowered in Heaven.  Meanwhile, Isfet and Quino prepared to launch a final attack to invade Heaven and destroy their enemies once and for all.

Then a stranger came to Heaven; he was a God bearing his divine Father on his back and leading his Mother by the hand.  This stranger's name was Marzan.  He told the Gods of what had happened and demanded to know why they weren't doing anything.  The Gods insisted that they had tried, but they had failed.  Marzan then consulted his father and mother, who told him this: "Tell them you will defeat Isfet for them, if they make you King."  Marzan agreed that this was wise and told the Gods this, declaring he would be victorious over the Dragon-Goddess.  The other Gods agreed to these terms, as none expected Marzan to be able to win.

Marzan then quickly hurried to the original place where the Gods had gathered and found what remained of the Water of Truth. He scooped it up and froze it into a sword.  Then weaving himself a net of starlight and virtue, he attacked the Dragon-Goddess and her children while they were climbing up the clouds into Heaven.  Marzan dispatched her children one at a time, burning Witch with fire from the Sun, binding Inferno to a complicated bureaucracy and even shattering her perfect son Dragon into a million colors and varieties, each one a fragment of his original perfection.  Then, avoiding Quino, he confronted Isfet personally.  He did battle with her and ensnared her in his net and because the net was made of virtue, Isfet's powers could not affect it.  Marzan then sliced her into pieces and used her body to repair the world and fix the damage she had wrought.

After the battle, the surviving children of Isfet were banished, cursed to forever be feared and hated by the Gods of LAW and
mortals.  Marzan was offered the crown, but he rejected it, as he had been injured during the battle, infused with some of Isfet's power.  Now whenever Marzan acted, her shadow would follow, so he was not worthy to be King, he declared.  So his Father was offered the crown in Marzan's place, which he gratefully accepted.  Finally, the Gods placed Quino on trial for the murder of the world and the mortals, and he was found guilty.  Qunio was sentenced to having his blood spilled and infused into the corpses of the two mortals, restoring them to life.  However, this had the side effect of causing all the monstrous urges of Quino to live on in of mortals.

Thus did the world begin, end, and begin again. 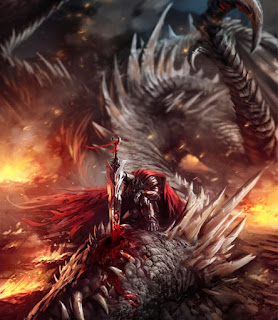 Email ThisBlogThis!Share to TwitterShare to FacebookShare to Pinterest
Labels: Nukaria