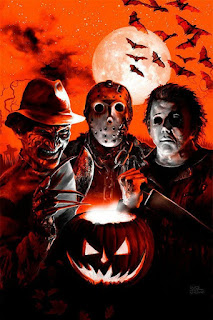 A brief taxonomy of Undead:

Ghosts are the remnants of mortals that remain in this world, trapped in loops of repetitive behavior.  The Ghost of the Splatter Man continually hunts and kills those who resemble those who victimized him in a past life, while the Ghost of the Moonlight Fiddler seduces maidens and causes dogs to go feral and attack their owners, believing them to be intruders.  There are many varieties of Ghost, with the fully personable being the most famous type.

The Lesser Undead are when the soul of an evil mortal is recalled from Sheol and imprisoned in a corpse.  This existence is hellish, causing the trapped soul to feel only anger, envy, sorrow and pain.  These include such things as Zombies, Skeletons, etc.

The Greater Undead are created when a sufficiently powerful evil spirit or Demon is summoned and permitted to inhabit a corpse, as well as to torment the lower souls that remain within the body after death.  This category includes things such as Wights.

Ghouls are mortals who transform slowly into Undead through the consumption of corpses.  They begin as mere cannibals but rapidly become something less than human.

Vampirism is caused by a sexually transmitted disease.  It slowly strips you of everything, until you degenerate into a near-feral monster.

Liches and Mummies are methods of preserving life by willingly becoming an Undead.

Revenants are Undead who are created by agents of Heavenly Justice.  They are impossible to bind and obsessed with killing their murderer.  They are only unleashed when no other suitable agent is found to exact the Justice of Heaven.

And then, there is the Slasher.

Note: The term "Slasher" in the way I am using it and many of the results on the table down below are stolen or inspired by the comic series Hack/Slash.  I highly recommend reading it if you can, though I would skip the last volume, #6, as the series takes a dip there and never really recovers. 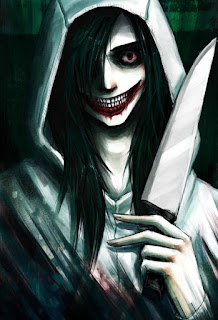 Slashers are Undead created when a particularly heinous murderer is slain.  However, just like the Revenant, they are not permitted to die.  Forces from beyond the Grave fill them with power and inspire them to take up their black crusade again.

However, unlike the Revenant, Slashers do not have a specific target that they pursue unerringly.  Slashers target groups of people or attack indiscriminately with no regard for who or what their victims are.

Additionally, unlike the Revenant, which goes to his rest after his target has been slain, Slashers never truly die.  Chop them to bits, burn them to ashes, blow them into a fine mist, it doesn't matter.  They always come back.

Undead: Slashers are Undead.  They do not feel pain or get tired.  They are immune to poison and disease.  They do not need to eat, sleep or breathe.  Any spell that says "Undead" in its title or description is talking about something like this.

Sunlight Vulnerability: Slashers take 1d6 radiant damage for every round they spend in sunlight.

Already Dead: Unless decapitated, cut to pieces, burnt to ashes by sunlight or reduced to zero HP by a magical attack or weapon, Slashers have an X-in-6 chance of their body knitting itself back together and recovering from the damage they took, where X is equal to the number of HD they have.

Indefatigueable Purpose: Slashers cannot be turned or controlled.  They are immune to Charm and Fear spells.  Similarly, they are immune to any Undead Control Spell.  Slashers also do not feel fear, though they will retreat if a tactical advantage can be grasped (though most Slashers aren't that smart).

Tactics:
- Sneak up on a target
- Attack the one that fits your standards most closely
- If attacked, fight the most dangerous one
- Never give up and rarely retreat 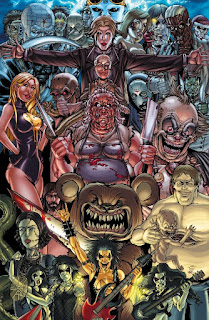 So what Slasher will you have the misfortune of meeting?

1d10
1- Hacksaw Joe.  An enormous man in a featureless mask.  Kills with any melee weapon that he can find and mutilates the bodies with a hacksaw, hence the name.  He attacks anyone who disturbs the peaceful atmosphere of his modest mountain home.  Special Ability: Teleport.  Hacksaw Joe can disappear into thin air whenever no one is looking at him and reappear where no one can see.

2- Father Wrath.  A man in a white mask and the garb of a Roman Catholic Priest.  He wields a sword concealed in a massive crucifix and a rosary made of wire and ball bearings.  He slices with the first and strangles with the second.  Father Wrath kills sinners, with a preference for fornicators, adulterers and those who have committed sexual sin.  Special Ability: Sin Sense.  Father Wrath can sense the presence of someone who has unconfessed sexual sin, which includes anything that wasn't intra-marital sex.

3- Dr. Grotesque.  A man who has stripped off his skin to reveal bare, bloody muscle.  Over this, he wears a lab coat.  He's a psychotherapist who seeks to "cure" people of their hang-ups by kidnapping them and subjecting them to physical pain, which unlocks mental pain, at least according to him.  Special Ability: Grotesque can force someone to tell him a piece of personal information or a secret if he injures them.

4- Acid Angel.  A beautiful blonde with fair skin and an enormous tattoo spreading from her crotch up to just below her shapely breasts.  The tattoo depicts an enormous Gorgon, with long coils and dozens of wings.  She seeks to seduce and kill men who resemble the ones who shamed her while she was still alive (athletes, handsome guys, cops).  Special Ability: Acid Wash.  Acid Angel can secrete acid strong enough to melt through steel from her hands every 1d4 rounds, or turn any water she touches into the same strong acid.  She is immune to her own acid.

5- The Scotsman.  A man horribly burned over most of his body, with a few tufts of red hair poking out of the ruin of his scalp.  He plays the bagpipes.  He kills Englishmen, Welshmen and the Irish, with the exception of the Scotch-Irish.  He usually operates in the United Kingdom.  Special Ability: He can breathe fire.

6- Duke Saxon.  A man in a World War I British Army Uniform, with full gas mask and helm.  He carries a rifle with a bayonet attached, though he only ever shoots people in non-fatal areas.  His preferred method of killing is stabbing with the bayonet or smashing limbs and heads with the rifle butt.  When he speaks, he speaks like a British gentleman.  He is exceedingly polite.  He kills anyone wearing an a uniform, military men or associated with any military or law enforcement organization. Special Ability: Every 1d4 rounds, he can produce a cloud of mustard gas.

7- Atlanta.  A woman in a one-piece swimsuit, skin blue from hypothermia, perpetually soaking wet.  Her eyes are cold and dead and she is covered in wounds, with bits of trailing skin flowing behind her, as well as exposing shredded meat and ribbed flesh.  She carries a fishing spear.  She attacks anyone who goes into the water, though her usual hunting grounds are from South Carolina to Corpus Christi, Texas, along with most of the Caribbean.  Special Ability: Return.  Atlanta can summon her spear and have it return to her hand as an action, unless it is destroyed completely.

8- Bobby.  A man with flesh green-brown from rot, his face covered by a surgical mask, his eyes burning with unnatural light. He wears scrubs, heavy boots and a filthy lab coat.  He carries a gravedigger's spade and kills by smashing people's heads in or burying them alive.  He is dedicated to revenge against a particular group of men in a small town, including a Sheriff's deputy, but he will kill anyone who harms an animal.  Special Ability: Pet Cemetery.  Bobby can raise the corpses of dead animals as his undead minions.  These Undead obey him and will seek to keep other enemies away from him and his targets.

9- Pumpkinhead/Samhain.  A man in black, with a swirling cape and a Jack-o-lantern mask.  He is a ruthless and peerless warrior, skilled in his use of a knife, among other weapons.  He fights with skill and precision, acting more like an assassin then a maddened killer.  He kills whoever his masters tell him to and anyone who might discover their plans.  Special Ability: Samhain can radiate an aura of fear or charm, depending on what he prefers.  Anyone who sees him must save. On a failure, they are charmed/frightened.  Those who fail their save take 1d6 COG damage a round as long as they maintain visual contact with Samhain.  Those who are reduced to 0 COG by this ability either flee or fling themselves at his feet.

10- Ms. Hack.  A hot young woman with black hair and brown eyes that have seen too much slaughter, Hack is dressed to kill, usually in something irresistibly sexy.  She also carries a large amount of weapons with her and is skilled in knives, bludgeons and fisticuffs, though her weapon of choice is a baseball bat studded with enormous nails.  Hack will tell you that she only kills Slashers and other killers, but do not underestimate her.  She is suspected to have killed many normal people in her travels and likely will not hesitate to take your life.  Special Ability: Riposte.  Hack, when she is damaged by someone, if she attacks them on her next turn and hits, can roll a die equal to the damage die rolled against her and regain a number of HP equal to the number she rolls.  For example, if she is successfully attacked and takes 4 damage from a 1d6 dagger, if she attacks and hits that person, she can regain 1d6 HP. 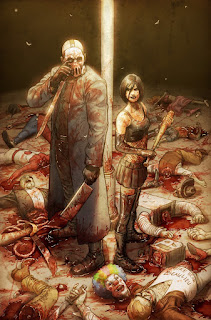