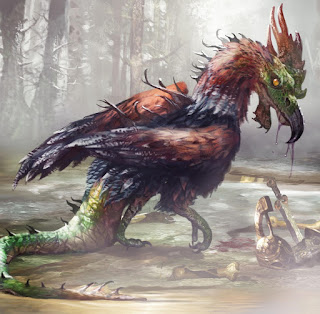 At the Beginning, Rooster and Hen lived together as husband and wife.  They both loved each other at first, but once The War started, cracks began forming in their relationship.  For while she loved her husband, gossip soon reached Hen that Rooster had broken his vow and had a secret lover. Hurt and ashamed by this, Hen fled from Rooster's tent and wandered into the wilderness.

There, she encountered Serpent, that most cruel and clever animal.  Recently deprived of his legs, Serpent was sad and lonely.  Hen would not have approached him, but Serpent gave off an aura of pathos that he never had before.  She approached him and struck up a conversation.  Quickly they began to bond, finding companionship as they bonded over their sadness.  From that point on, whenever Rooster came home with someone else's feathers on him, Hen would make some excuse and sneak out to see Serpent.  Eventually, the two of them came to fall in love.  And soon enough, Hen mimicked Rooster by allowing herself to be seduced by Serpent.

Hen's infidelity lay undiscovered for many moons, until finally, the child that had been conceived by her and Serpent was born and when Rooster laid eyes on its strange, scaly body, he accused Hen of the infidelity she was surely guilty of.  He then dragged Hen before the whole community, in hopes of shaming her and allowing himself to formally separate from her.  However, once he was finished his accusations, Rooster's various lovers came forward, many with the children that had been produced from the affairs.  Thus shamed, Rooster declared that he and Hen were hence forth enemies and that his children would be a plague on hers.  In response, she cursed him by declaring that he and his descendants would not be able to produce children outside of a lawful marriage.

This started a feud that has lasted until today.  This is why Farmers who have chickens must conduct marriage ceremonies between a Rooster and their Hens, and why lands where the Gods support polygamy have many more chickens than ones that don't.

And as for Serpent?  Clever creature that he was he kept his silence and whisked away his child, to raise it himself.  This child would eventually grow up to become a Monster named Cockatrice.

Freezing Eyes: Anyone who meets a Cockatrice's eyes can either take 1d6 DEX damage or find their body slowed.  A person slowed by this gaze can move or make an action (attack, use an item, anything besides talk) but not both.  Anyone who has their DEX reduced to 0 by a Cockatrice has the outermost layer of skin, stopping at the entrances of their orifices, turn to stone.

Tactics:
- Only attack if an enemy is near the nest or a threat
- Stay out of range of those with long or big weapons
- Uses eyes to keep at range, attack those who get close

Cockatrices are beasts, about as smart as house cats.  They are slightly larger than most cats, being just slightly larger than a rooster.  They are carnivores and primarily eat insects, lizards, snakes, snails and worms.  However, they will eat almost any form of meat, including carrion.  Cockatrices use their paralyzing eyes and petrifying beak as means of defense against larger predators, which mostly avoid them.

Cockatrices will not attack larger animals unless they stray too close to their nests or are attacked, but if they are, they retaliate with animal savagery.  Creatures that are unlucky around them find themselves trapped in a layer of stone, alive but unable to move.  Cockatrices then perform the act they are most known for.  They climb up their partially petrified victim's body and begin to eat the accessible soft tissues through the mouth.  And since Cockatrices are also highly flexible, they can usually fit quite a long way inside.  These partially petrified victims usually attract feeding frenzies of Cockatrices, which swarm around the living statuary, screeching at each other and jostling for a spot.  Needless to say, the usual outcome of made a meal by a Cockatrice or a flock of the same like this is agonizing death.  For this reason, Cockatrices have an evil reputation.

Cockatrices are avoided by all reasonable folk.  Some still can use for these creatures though.  Hags often seek Cockatrices, either as guard-animals, for some scheme, or merely to release into a village for a sick prank.

Among Sages and Alchemists, it is common knowledge that a Cockatrice's eggs, since they are magical, preserve the offspring in a stasis-like field.  As long as the shell isn't breached, the Cockatrice will be alive inside.  These eggs allow an easy way to harvest the livers of Cockatrices, or to wreak criminal mischief.  An unhatched Cockatrice can be hatched if a non-virgin woman pees on one.  And a newly hatched Cockatrice is still as dangerous as a mature one.  Some clever criminals have kept a Cockatrice egg with them as a means of distracting the authorities and escaping. 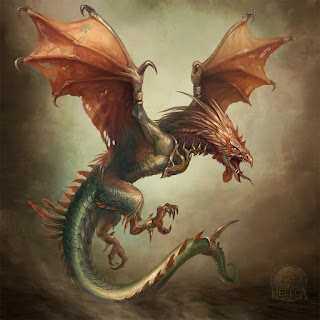