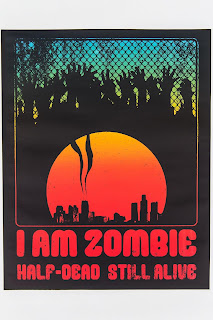 There is a contagion known as the Amirani virus.  It only infects humans but it is very lethal, kill 100% of those who contract it.  Fortunately, it is only spread through infected fluids, so it is relatively difficult to contract.

Anyone who is infected with the Amirani virus slowly degenerates over 20-24 hours, depending on their strength.  Eventually, the penultimate effect of the virus is brain-death.  The infected slips into a coma like state, with no brain activity available.  Then, shortly after, they reanimate.

Most who come back are husks of what they once were, driven only by the urge to feed.  They aren't physically dead, but they are in every other way that matters.  This is, in their parlance, a Skag.  You probably know it by another name though: Zombie.

But not everyone infected with the Amirani virus becomes a mindless Zombie/Skag.  The virus is actually intelligent in some sort of way, a liquid superconsciousness that lives between and inside all of its hosts.  And for its own purposs, it sometimes chooses to preserve the mind of the infected, so that their souls linger in their virus-infected corpse.  As such, when the virus runs its course, they are still alive, at least in some ways.

They have become a carrion-fueled superorganism, otherwise known as a Virulent by the Company's official lingo.  They reject such a label, however, referring to themselves as Toxic.

The Toxic are an idea ripped straight from I am Zombie, a game that is worth buying if only for the fabulous field guide.  For more on my version of the Toxic, consult here and here. 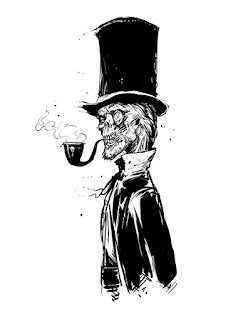 Regeneration: You regenerate at a rate of 1d6 HP a round automatically.  Every time you regenerate, you lose 1d4 Humanity Points.  Your regeneration cannot regrow limbs, but can reattach a severed limb to your body if they are held close to each other for at least 1 round (as an action).  Note that it doesn't have to be your limb, but any creature's who has a limb mostly compatible to your body.

Humanity Points: You have 30 of them.  Triggering Chaos, Corruption or Regeneration causes you to lose some.  When you lose enough, you start suffering bad effects.

When you are down to 20, you get -4 to any rolls requiring focus, intelligence, thinking, or doing something boring.  You become more sensual and emotional.

When you are down to 10, you are acting through a fog.  Any rolls requiring intelligence, patience or cleverness are made at a -6 penalty.  You can barely speak coherently and think only in terms of instincts, behaving like a beast.

When you hit 5, you become a Skag, an unintelligent Virulent, the textbook definition of a "Zombie"- Romero-style.  While a Skag you only seek to spread the infection.

When you hit 0, you become a Skag permanently and lose the ability to regenerate. There is no coming back from this.

The only way to recover Humanity Points is to attend Purgis, a monthly celebration/communal gathering of all the local Toxic that takes place in one of their strongholds.

Infection: Your bodily fluids can infect people.  Anyone who hits you with a melee attack with a non-reach weapon or you hit with an unarmed attack must save or be infected.  The more Humanity Points you have, or in Toxic lingo, the Warmer you are, the less infectious you are.

BERZERK: In a stressful situation, when you are in danger, when you are high on Odium (low on Humanity Points), there is a chance you lose control and fly into a homicidal rage.  During this rage you will attempt to kill every non-Toxic you can get your hands on.  You must attack each round while BERZERK.  You can attempt to resist it by succeeding on a save.  To stop going BERZERK, you must also roll a save.

Penalties or modifiers to the Save:
Penalties:
- You are high on Odium/low on Humanity Points +X [Use Infection Table (see above)]
- You were really angry, emotional or stressed before going BERZERK +2
- You chose to go BERZERK +1
Bonuses:
- There are no non-Toxic left alive within your reach +4
- Whatever danger or stressor that triggered you going BERZERK is past +2
- Your friends or people you like are trying to calm you down +2

While going BERZERK, you cannot command your Skags nor use Vectors.

Scourge Visions: The Amirani superconsciousness, called the Scourge by those who bear its curse, will sometimes speak to the Toxic.  It can send them visions or cause them to hallucinate.  It does this to tell the target about something important, occasionally to warn them of danger or to prompt them to take some action to advance its own agenda, whatever that may be.
Some Toxic believe these visions are religious in nature and venerate the spirits of past Toxic, while others regard them as nothing more than the sleep-talk of a blind, idiot God.

Skag Trainer: You gain the ability to adopt and train "wild" Skags to do what you wish.  You cannot train a Skag to do everything, they are about as smart as a grasshopper naturally, most of what Skags do is muscle memory.  As such, they cannot do something that requires active cognition or intelligent decision making.  A Skag could type in the password it put in every day before work, but it couldn't solve the equation "2+2=X".

A Skag that has already been trained by a Toxic cannot be trained and will generally ignore orders, unless it was told to obey orders from others that weren't it's master.  A Wild Skag will follow around and try to please any Toxic of sufficient strength- deferring to the strongest in the group.

Mana Dice: The Scourge feeds you strength and power.  You gain access to a pool of Mana Dice, which you can use to cast Vectors.  Mana Dice can also be used to power other implements that require mana.  MD burn out on a 5 or 6, otherwise they return to your pool after use.  All MD are recovered after a long rest.  Rolling doubles or triples on MD triggers Chaos or Corruption.  Toxic do not have DOOMs.

You start with a number of MD equal to your CON modifier, and gain +1 per level past that point.

Vector: Vectors are magical abilities that the Scourge gifts you with.  A Toxic can cast any Vector he knows at any time, provided he has at least 1 MD.  When you reach this level, a Toxic should roll on the random Vector table (found here).  Whatever they roll is their Prime Vector.  Each time they level up, they can either automatically receive a random Vector from their Prime Vector, or roll 1d10 with a chance equal to their level.  If they roll under or equal to their level, they learn a random Vector from another Vector of their choice.

For example, if your Prime Vector is Biofix, then each time you level up you gain another random Biofix Vector, rerolling duplicates.  But if you roll 1d10 and succeed, you can learn a new Vector from a random Vector Strain.

Unnatural Life: Unless burned to ashes or slain with a magic weapon, attack or ability, you cannot die from violence and will recover from all injuries given enough time.

For example, even if crushed into a cube in a car compactor, you would still be alive, though your existence would be hideous and painful and you would likely long for death.

Dirt Nap: If sufficiently injured, or if you wish, you can bury yourself alive and go to sleep.  The Scourge will preserve your body and soul and you can stay in the ground for years, decades or even longer.  When you wake up you will be what the Toxic call a By-Goner, and are likely to be bewildered and confused by what the world has become in your absence.

Emblem Vector: You gain access either to the Emblem Vector of your Prime Vector or 1 random Vector from one of the Vector Strains you command.

Profane: You have become so powerful that you now possess a Kingly Aura that makes lesser Toxic tremble at your presence.  You can identify Toxic on sight and when they make reaction rolls to you, they reroll poor reactions.  They might not love you, in fact, they probably despise you.  But you are now someone to be feared and respected.

Additionally, if you are in a situation with other Toxic who are of lower level than you and not themselves Profane, you can make a CHA check.  On a successful check of appropriate difficulty (Referee's Discretion) they will obey your orders.  This is not compulsion.  The Check's DC will vary, for something sensible it will be low, and the riskier or less reasonable it seems, the less likely they are to follow it.

Chosen by the Dark Gods: You are chosen by the Venerate Utuuku and the Spirits, who you know recognize are greater than even the Scourge.  If you are ever reduced to 0 Humanity Points, if you aren't killed and are taken to Purgis, you will make a full recovery and return with 30 Humanity Points. 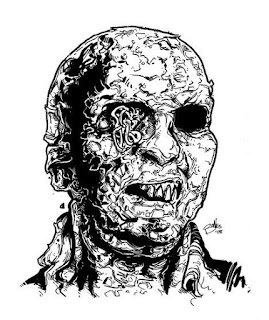