OSR: The Folk: Dryads and Spriggans and Redcaps oh my!

The Folk are my version of the Fair Folk.  Much of the basis for this are stolen from Dan's Throne of Salt and Arnold K's Goblin Punch. 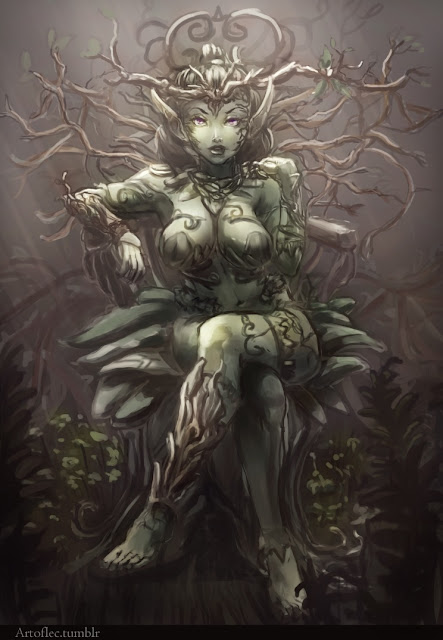 Beautiful women with green skin or brown skin, black eyes and nails, and silky hair with the texture and feel of grass.  Dryads are seducers, mischief-makers and home-wreckers.  Unlike most other Folk, they are not overly malicious, but they are amoral, or at least only moral in the way that Folk are.  They dislike the fruits of civilization, clothing, math, language, but can tolerate them.  Many of them find such things hilarious, to be honest, and will giggle at the perfumed man without any mud under his nails.

Dryads usually keep themselves busy with making idle mischief, playing pranks and seducing beautiful or interesting people. One of the only ways to rouse a Dryad to anger is to threaten one of her possessions or her tree.  If threatened in such a way, she will react with as much violence as she can- including using her spells or spurring the local plants to attack.  The other thing that will anger a Dryad is endangering her forest, in which case she will react with violence and rage.

Note: Most plants in Nukaria can move, at least a little bit.  But plants are slower moving than mortals and moving takes much more energy than they would like to expend.  As such, they usually don't move.  The wild plants of the forest and wilderness hate you for your intrusion, but they aren't likely to do more than grumble amongst themselves.

This is not true of domesticated plants though- they love humans and especially their farmers, and will even come to his defense.  It is widely known that you should never fight a farmer in his own field, but very few know that this proverb is not just metaphorical. 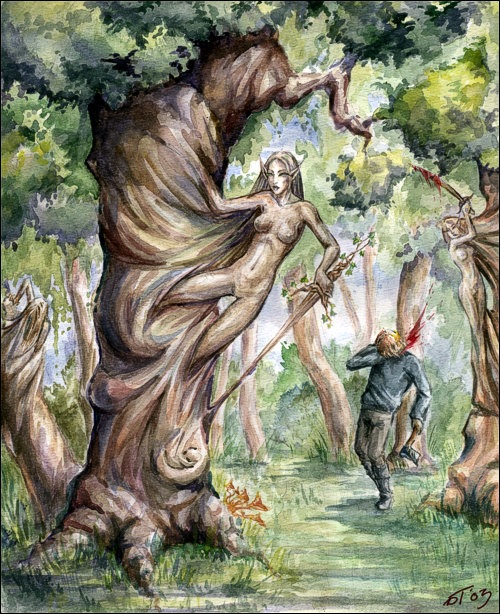 Truth-Teller: Dryads cannot lie.  They can muddy the issue, dodge the question and not answer, but they cannot lie directly.

Plant Walk: Dryads can move through plants and trees like they aren't there, and can automatically avoid damage from things like thorns.

Friend of the Forest: Dryads can 1/Day rouse a nearby plant to take action against someone she does not like.  To see which plant she rouses to defend her, roll on the table below.  She is generally beloved by the forest and its inhabitants, both plant and animal.  Other Folk are likely also to hold her in high regard and will come to her aid if called.  Additionally, if attacked in the sight of her tree, it will act to defend her.

Bound: Dryads are bound to one particular tree.  If that tree dies, so do they.  If a Dryad dies, the tree will be so overcome with grief it may become a Treant (see below).  Even if it does not, expect reprisal from the other Folk.

Tactics:
- Charm someone
- Stay out of melee range and try to avoid being attacked
- Rouse plants to fight if in real danger

What plant does this Dryad rouse to protect her?

1d6
1- Bramble bush.  The bush rapidly grows, forming a wall of thorns separating the Dryad from you.  The wall of thorns has 1d6 HD and is vulnerable to fire damage.  Anyone who attempts to cut or smash the wall must save or take 1d6 damage.
2- Thorny Vines.  The nearby vines uncoil and spring out like snakes, attempting to wrap around and impale you.  The vines make 1d4 attacks, doing 1d6 damage on a hit.  Those who are hit are also grappled and take damage each turn.
3- Traitor Mushrooms.  The mushrooms flood the air with hallucinogenic spores, save or suffer hallucinations for the next 1d6 hours.
4- Venus Mantrap.  An ambush predator it may usually be, but it will respond this time.  It will send out vines to grapple you, then lift you up and swallow you whole.  Then it will fill its "mouth" with acidic juices and dissolve you into nutritious sludge that it will gulp down.  Less a monster and more of a puzzle.
5- Irritable Tree.  A nearby tree drops a branch on you.  Succeed on your defense roll or take 1d12 damage.
6- Hateful Tree.  A nearby tree sends its roots up through the ground to attempt to grab 1d3 of the creatures near it.  These are attacks that do 1d6 damage and are made at +4, as they come from a surprising direction.  Creatures that are hit are grappled and pulled into the hollow created by the tree's roots and buried alive.

If the Dryad is threatened in the sight of her tree, the...

1d6
1- Oak.  Will hurl acorns at super-high speeds at one target a round.  These do 1d8 damage and do damage like bullets fired from a pistol.
2- Holly.  Will make 1d3+1 attacks with its low-hanging branches covered in sharp leaves, each one doing 1d6 damage on a hit.
3- Eucalyptus.  Will hurl a glob of burning sap once per round.  The sap does 2d6 fire + 1d6 fire per round until an action is taken to scrap it off.  The tree is immune to fire damage and so is the Dryad.
4- Ironwood.  The Tree will uses its branches to intercept one attack made against the Dryad per round, taking the damage itself.  The Tree itself has a Damage Threshold of 1d4+3 and a matching number of SHP.
5- Acacia.  The Tree will summon a swarm of bees, wasps or ants as reinforcements.
6- Manicheel.  The Tree will spray onto one creature within 50'.  This requires an attack roll.  Any creature hit takes 1d6 damage and must save.  On a failure he takes 1d6 CON damage.  If this damage reduces someone's CON to 0, that creature dies.  The Dryad is immune to the creature's poison.  If the tree is damaged by fire, it will release poisonous smoke that does exactly what the poison attack does, but requires no attack roll. 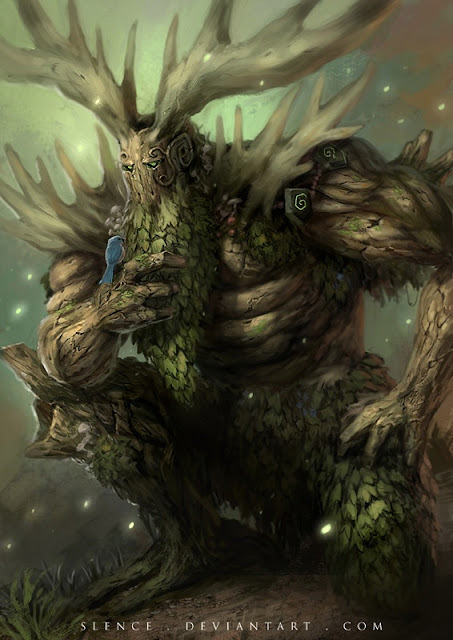 source not available, page has been deleted

Trees are living creatures and like all creatures, must nourish their souls as well as their bodies.  As such, they drain some of the residual mana injected into the soil by other plants or bled into it by animals.  This is also why Druids bury the half-eaten bodies of the dead, and their own honored fallen, beneath trees, to ensure their woody allies have sufficient nourishment.

But sometimes, when a Tree is sufficiently moved, such as when its Dryad is slain, its forest is cut down, or it is especially shamed by men of the City it will swallow as much extra mana as it can.  This will cause the tree to transform, transforming into a vicious caricature of a mortal, with a solemn face and dark, burning eyes.  The Tree has just become a Treant and will seek to exact its vengeance on civilization in a much more tangible way.

Treants can also be created through the use of the Awaken spell, and these Treants generally do not regard civilization with contempt, though they are still strange and bizarre by mortal standards. 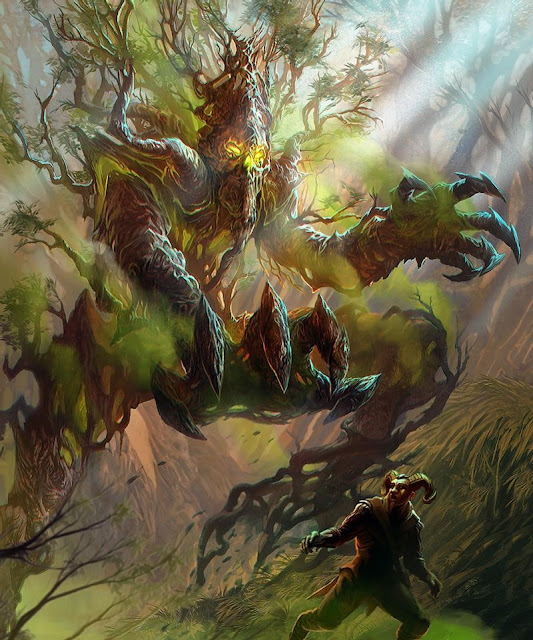 Truth-Teller: Treants cannot lie.  They can muddy the issue, dodge the question and not answer, but they cannot lie directly.

Grab: Instead of damaging a creature with its unarmed strike, the Treant can instead choose to grapple that creature.  A creature grappled by the Treant can be forced to take 2d6 damage a round, no save permitted.

Thrown Object: Treants are enormously strong and will often grab heavy objects such as boulders, cows, chicken coops, other humanoids, etc and hurl them as projectiles.  If a projectile thrown is a living creature, it takes damage as does anything it hits.

Tactics:
- Grab annoying creatures and throw them at their friends
- Crush anyone who can fling around fire or lightning first
- Retreat if reduced to half HP, there will be another day 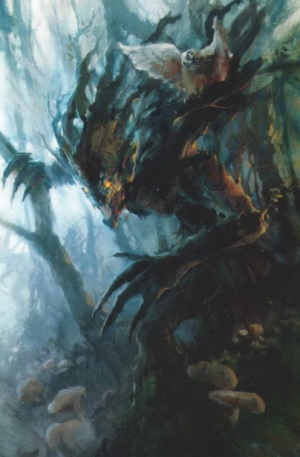 There are few Folk as widely feared as the Spriggans.  They are terrors, comparable to Demons in the rage and fear they provoke.  Spriggans are skilled creatures, able to wield and channel the power of the Wild into enormous displays of destructive power.  It is said that they were the ones who taught the Druids how to wield the power of the Green Gods and it is their songs that haunt loggers and hunters as they hurry about, hoping to leave the forest without attracting their attention.

Spriggans are powerful, there can be no doubt about that, but this power makes them arrogant.  Spriggans usually possess an overwhelming advantage when it comes to attack power, so they assume they will be able to handle most opponents with little trouble.  When confronted by a Spriggan, if it does not immediately attack, you can attempt to dissuade it from doing so by flattering its ego and presenting it with gifts.  If you are sufficiently obesquieous, the Spriggan may let you off, as long as it can gain something from you.

Spriggans regard themselves as elevated, only lending their service to truly terrible Folk and to the Faeries, who are the Noble of the Folk. 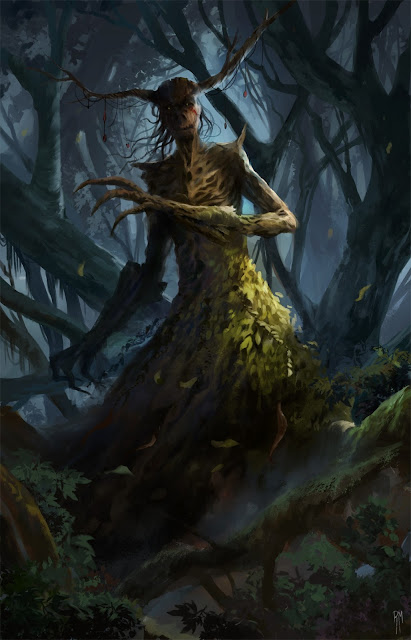 Truth-Teller: Spriggans cannot lie.  They can muddy the issue, dodge the question and not answer, but they cannot lie directly.

Innate Spellcasting: Spriggans have 6 Mana Dice.  Their MD burn out on a 5 or 6.  However, they do not invoke Chaos or Corruption.  To see what spells they know, see below.

Tactics:
- Demand things from your opponents
- If they refuse, bombard them with magical firepower
- Retreat if you run out of MD

In exchange for your safety/a favor, this Spriggan wants...

1d4
1- For you to humiliate yourself.
2- To retrieve a possession of its that was stolen by a group of mischievous inferiors.  These inferiors are 1d3 [1= A group of Goblins; 2= A band of Boggarts; 3= A hungry Troll.]
3- To attack a stronger Folk.  The Spriggan wants it gone so the other Folk's territory can be the Spriggans.  Of course, it won't say that.
4- To bring it a particular person from a nearby town or village.

The Spriggan knows the spells... 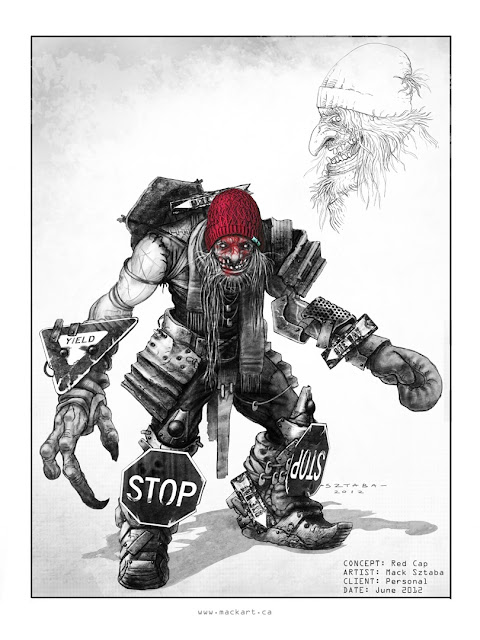 The Folk are generally amoral, but they are not entirely without a sense of justice.  As such, when a man of the city murders another in their domain, sometimes they are spurred to action.  Hearing the cries of the murdered man's blood, they spin his remaining life-force into the ground, crafting it into seeds and watering them with the victim's hatred for his killer.  These seeds grow, producing a terrible crop of Folk known as Redcaps.

Redcaps are small, 3-4' tall Folk born with the insatiable desire to kill.  Their first target is always the murderer who created them by watering the land with his victim's blood.  They can sense his direction and distance from them and will pursue him unerringly.  They will attempt to take him in the same way that the murder was committed- if by stealth then they will break into his home at night, or if he assaulted the victim in daylight then they will attack him at noon, while he is in the market.  Once they have slain their "father*", the Redcaps will still feel the urge to kill and despoil.  However, lacking any murderer to slay, they will fabricate some reason to continue their bloody work.

There is, however, another reason why Redcaps kill.  As creatures born of bloody passion and violence, it is the only thing that sustains them.  A Redcap must kill a living creature at least 3 days and smear this blood onto its head.  They are called Redcaps because they usually dip their hats in blood and leave it to drip down their face.

Additionally, Redcaps absorb a bit of power from every creature they kill.  The longer a Redcap has been alive, the stronger it becomes.

Truth-Teller: Redcaps cannot lie.  They can muddy the issue, dodge the question and not answer, but they cannot lie directly.

Tactics:
- Attack with furious hate
- Focus on the strongest or the weakest
- Retreat if a battle is not satisfactory 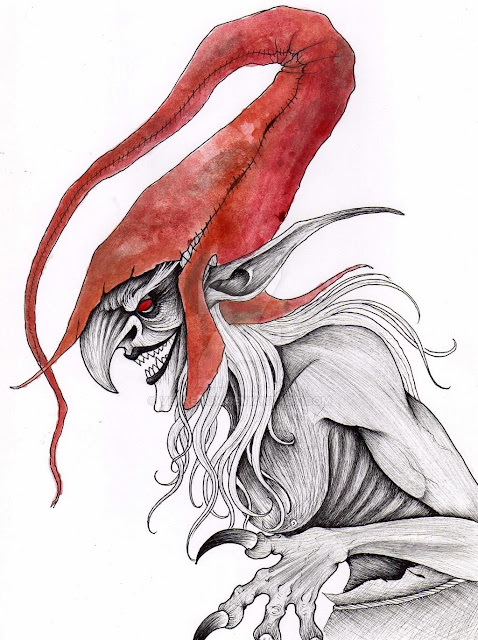