OSR: Necromancers- The Waker of Ghouls, the Plunderer of Tombs, the Thieves of Eternal Sleep

Necromancy is not illegal in Eldritch Americana.  But grave-robbing, theft of corpses, trespassing on church grounds, and  necrophilia are.  As such, Necromancy has a poor reputation among the common people, even more so then most other types of Magic.  Some Necromancers attempt to mitigate this by keeping a scrupulous public image and dodging the police, while others merely pretend to be a different type of Wizard and keep their bone artistry behind closed doors.  Others revel in the attention, wearing elaborate costumes replete with skulls, fetishes, chokers, piercing and tattoos.

Necromancers have a mix of spells that allow them to create Undead Servants, debuff enemies and inflict modest damage.  And while Necromancers do have a bad reputation, nothing about Necromancy is more or less corrupting then any other type of Magic.  For starting spells, roll 1d12 on the table below and reroll duplicates.  Spells 13 and 14 are rare, and as valuable as magic swords.

Power: Can cast Speak with Dead at will without rolling any Spellcasting Dice.

Drawback: You attract Undead like moths to a flame.  Each day/week/month, you have a 1d10% chance equal to your level of attracting a free Undead.  Undead enemies will always target you if they have the choice. 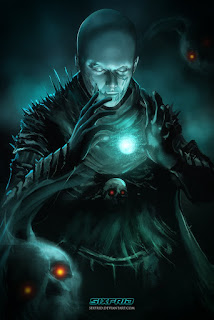 Deal [dice] damage to target creature for [dice] rounds.  If more than two dice are used to cast it, then the target also gets -[sum] to all checks based on Str, Dex, and Con.

You regain 1d6 HP per HD the creature had while it was alive.  Excess HP is shunted into FS.

Target Wizard must save or [dice] Undead Servants are set free from their control.

A target Humanoid corpse rises from the dead and becomes your Servant.  The Undead has [dice] HD and obeys you without question for [dice] days.  After the duration, the Servant regains its free will and may do whatever it wishes.

Peel the corpse's face off.  You may wear it as a mask, and it will alter your appearance,
face, and voice so that you look like the person who just had their face stolen.
If you invest four dice, the spell is permanent.  Otherwise the mask crumbles into dust once removed.

Crumble a corpse to dust and pull out a black scythe.  This scythe gets +2 to hit and +4 damage against that type of creature.

Target undead must save.   Undead with more HD than [dice] add the difference to their save.  Creatures with HD 3x greater than [dice] are immune and automatically pass their save.  On a failure, the Undead you targeted explodes, dealing 1d6*HD explosion damage to anyone within 10*[dice] feet, save for half.  Undead under your control automatically fail this save.

You gain the ability to speak with Corpses and Undead for [sum] minutes.  Corpses are dry, stupid, and can only inform you of the physical information.  The memories of the deceased are beyond their knowledge.  Undead are shrieking barbarians that hate you, hate the world, and hate God with a blinding passion.  If you try to talk to them, they will curse and swear at you, calling you all sorts of names.

[dice] creatures become afflicted with a disease of your choice.  There are a million varieties of this spell, each with a different disease.  If you don't know, roll 1d6.
1d6
1- Smallpox
2- Bubonic Plague
3- Spanish Flu
4- Yellow Fever
5- Ebola
6- Cholera

[dice] undead must save or spend their action fleeing from you.  If they cannot flee, they will cower at your feet or silently beg forgiveness.  Undead Servants use their Master's saves.

One Undead within range gains [dice] HD and regains [sum] HP.  The HD gained from this spell are permanent.

This spell allows the caster to grow fangs from their mouth.  While this spell is in effect, if the Caster drinks blood from another person, the caster regains 1d6 HP.  The caster may also uses their new fangs to make bite attacks.  These attacks do 1d12 damage on a hit, but are made at a -4 penalty unless used against helpless or immobile targets.  The caster may also choose to do no damage upon biting someone who they wish not to permanently harm.

If cast with 2 [dice] or more, the spellcaster also takes damage from sunlight equal to [dice] for the duration.

The tables can be found here.

Doom of Fools.  Become infected with a debilitating disease.  It is non-contagious.  You need to succeed two Con checks to be cured.  You automatically fail your first Con check, as a result of the Doom.  Two successful Con checks to recover.  On a failure, take 1d4 con damage a day.  If your Con hits zero, you die.  Base DC is 15.  Rest, food and sleep can give you bonuses, and adventuring, extra injury, and cold and damp can worsen the check.  Lost Con restores itself a point a day once cured.

Doom of Kings: As above, but the base DC you need to pass is 18.  The disease is now contagious.  It has also worsened, and does 1d6 Con damage a day.  All other rules still apply.

Ultimate Doom: As above, but the base DC everyone else needs to pass is 20.  It is now super contagious.  If infected, the disease does 1d8 Con damage for everyone who isn't you.  But you will not need to bother making your check, as you fall desperately ill as soon as you get this disease.  While others can recover, you will die in 1d20+4 hours.

This Doom is avoided by making a scapegoat when you become infected with the disease.  For the scapegoat, it must be A, a worthy sacrifice (a human or another sentient, three-souled species) and B, that which will be sacrificed must willingly accept the title of scapegoat.  Alternatively, you could avoid this Doom by becoming a Lich.
By Yami Bakura at October 17, 2017