While I was doing research for my Eldritch Americana Game, I began finding all sorts of incredibly strange and bizarre photographs from the early 20th century.  And while most of these weren't good for much, some of them got me thinking, and so I decided to use them as visual inspiration to create some kind of monster.  So I quickly sketched out some ideas based on what I found. 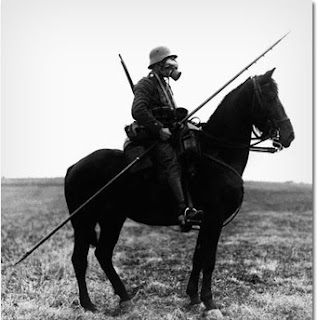 Breakable: If a character makes a successful action to hit the lance away or the Cavalryman rolls maximum damage, he must save or break his lance.

Trample: When a successful Trample attack is made, the target must save or be knocked prone.  If someone is knocked prone, the Cavalryman can immediately make a Lance Attack as a free action against them.

Horse: The Horse has 1 HD, AC 12, and the same morale and saves as its master.

Tactics:
- Ride down the most heavily armored
- Attack the fallen
- Retreat if your horse dies or your lance is broken

These poor soldiers are believed to be part of the Imperial Prussian Army, Light Brigade 104.  They charged a soviet artillery position and were struck by Russian Goblin Gas.  The gas disfigured them, but it did not kill them.  The Light Brigade would go on to win many decorations for valor on the Eastern Front, with its soldiers possessing a unique resistance to gas, fear, and magic.  This was counterbalanced by a series of increasingly brutal atrocities perpetrated against Russian civilians and POWs.  But at the time, this was not considered a cause of great concern, as the entire Eastern Front was little more than a horror show by 1916.  But after the armistice in 1918, many of its soldiers disappeared, leaving without a word or with a cryptic note that "The Kaiser has called me to one last battle."  The abdicated Kaiser denies this. 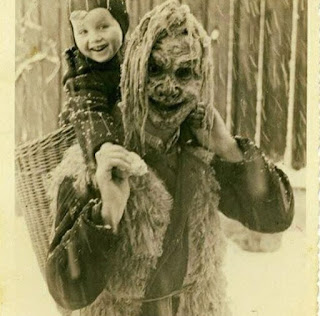 An Eyeless Man without his glamour and with his child (1917)

Glamour:  Eyeless Men look like a normal member of any common race.

Fragile: Eyeless Men are incredibly easy to kill.  A small cut can cause them to gush blood and swiftly die.  They count as always having 3 HP.

Bleeding: Eyeless Men will continue to constantly bleed from whatever wound they died from, and any attempt to seal the wound will only intensify the flow.  If the body is left motionless and angled slightly downward, then it will leak only a cup and half of blood (or 33 mm, for your Europeans).

Tactics:
- Instigate a fight
- Get killed
- Use your murderer to propagate your line

Eyeless Men are monsters that walk around under glamours, disguised as normal people.  They shop, go to work, and are generally unnoticed.  But they have all the defense capabilities of a hamster in a speed bag.  And this is by design.  Eyeless Men will orchestrate their own murders, then use the murderer to propagate their line.  For this reason, they suffer no fear, though they will fake it to appear more normal. 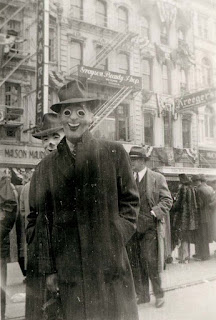 Rubber: Rubber Men take minimum damage from sharp weapons (cutting, slashing) and no damage from bludgeoning or falling.  If they must make a Saving Throw and you think being made of flexible, shock-absorbent material would be an asset, use the lower number.

Flammable: Rubber Men take double damage from fire, but only a large fire or one produced with a minimum of three Spellcasting Dice can set them alight.  A torch is not sufficient.

Freezable: Rubber Men take no damage from ice, but if chilled it removes their resistances to sharp and bludgeoning weapons.

Tactics:
- Throw gas (they don't need to breathe)
- Tackle people and jump off buildings
- Run away if you have fire or ice

Rubber Men are human shaped and human-looking, in the broadest sense of the latter.  They look distinctly inhuman up close, like a man wearing a hideous rubber mask.  But from a distance or in the dark, they look perfectly normal.  They love to scare people, and always get their victims worked up into a lather before killing them.  Rubber Men fear nothing but fire and Calcomancers.

They tend toward sadism and manipulation, but can be quite reasonable.