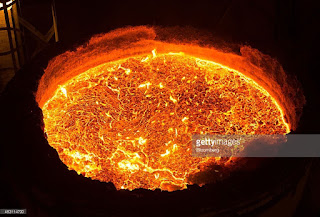 An incredibly spicy hot sauce made of rare monster organs and incredibly spicy peppers, chopped up into a slurry and fermented in a furnace made of meteor iron (or human bones).  The resulting sauce tastes like drinking molten lava, with about the same amount of pain.

When consumed, Five Alarm Hot-Sauce boosts someone's HP to 18 and gives them +10 FS.  If you don't use my system, just say it gives them +20 HP.  It also increases their STR to 18, makes their muscles swell until they resemble physical paragons of perfection, and turns their skin bright red.  One dose of Five Alarm Hot-Sauce will last you one hour.  Whenever it wears off, save.  On a failure lose a point of Wisdom permanently. 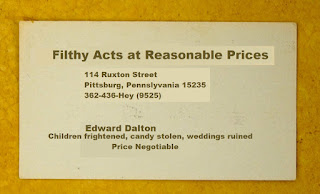 This is a business cards with the phrase "Filthy Acts at Reasonable Prices," written on it.  Underneath it is written the owner's name, "Edward Dalton," and his phone number: 362-436-Hey(9525).  Calling the number will connect you to Mr. Dalton; he's always home.  If you turn it over you will find his home address.  This changes depending on when you first check it, but it's always nearby.  Pay him a house-call, if you prefer.

Edward Dalton is a courteous, hospitable creature.  He looks human enough, but he possesses a black heart, a wicked, hideous soul.  He will do anything you ask of him, as long as it is a despicable act and appropriate payment is provided.  He charges currency, small demonic contracts, or favors.  His rule for favors is this, he will never ask for anything greater than what you asked of him.  If you asked him to kill someone, he can do the same.  But if you only asked him to key your ex-girl's car, then he won't ask for anything more substantial. 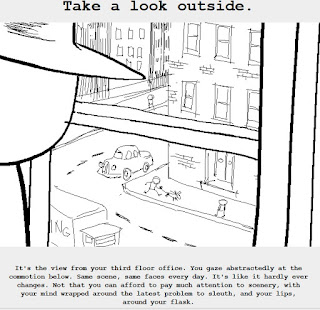 A window frame that shows an alien city.  It has a plug connected to the frame.  It can be taken off the wall and moved around.  When not plugged in, the window, if the glass is broken or opened, leads right through the back.  But if plugged in, it leads to this alien city.

The City on the other side is a bustling metropolis primarily populated by non-human things.  They have a different language and culture then you, and different morals and faith.  But they all breathe oxygen, have weapons like those the party might have, and would react the same way you would if a bunch of strangers from a foreign land came through a glowing window.  If the window is unplugged from the PC's home side, it becomes inert on the City side and you cannot leave through it.  Any enemy that has a Horizon Window will exploit this property. 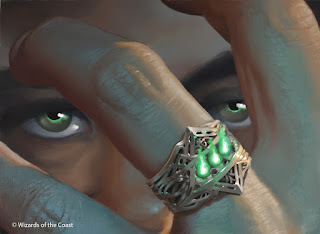 This ring promises immortality.  It does this by stealing another version of you from a parallel universe.  If anyone who wears it dies, their corpse is spirited away, and you should have the Player make a Saving Throw.  On a success, their doppelganger arrives immediately.  If they fail their saving throw, the perils of inter-universe travel delay them until the end of the encounter.  Regardless, roll on the following tables.

Finally, every time you use the Ring, there is a cumulative 10% chance that an Angel of Time shows up to slaughter you within 1d20 hours.  If this occurs, don't tell the players what it is for, just insert an Angel of Time into the next encounter.