OSR: Cosmomancer- The Scholars of the Stars, The Weavers of Light, The Masters of the World

Cosmomancers are fortune tellers, masters of fate, luck, and space.  They possess some of the most useful spells, but also some of the strangest.  Cosmomancers powers wax and wane with the moon, and many attribute the Sovereign of the Moon, Yosganeth for their magical abilities.

Power: Can make your hands emit light like a flashlight.  The light can be any color you like.

Drawback: Cannot sleep without a roof over your head.  You probably also have agoraphobia as well.  The Stars are spying on you, you're sure of it. 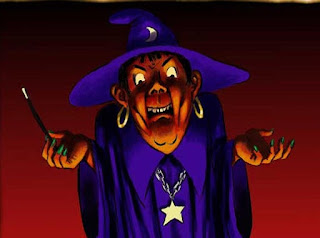 Legendary Spells: Meteor Swarm, Journey to the Past

You are adjacent to all things within your line of sight.  You can punch anything you could see.  You can pick up any object and put it in your pocket as if it were beside you.  However, you are affected as if you were in every location at once.  (To put it in grid-based combat terms, you are affected by all effects effecting every observable square.)  You do not suffer multiple effects from the same hazard (even though you are standing in all parts of a wall of fire, you only take its damage once).  Obviously, casting this spell within sight of the sun is instantly fatal.

[dice] creatures are cursed with terrible luck.  For the next [dice] hours, they subtract [dice] from all their rolls, and one random person who is not afflicted by the spell adds +[dice] to all their 1d20 rolls for their next [dice] hours.

Creature is surrounded by dazzling light for [dice] rounds.
Attacks against them get -[sum] to their roll for the duration.

Ask the stars one question.  It must be about something occurring right now, or in the past under an open sky.  The question can be up to [sum] words long.  The Stars cannot see the future, or see into buildings or underground.

Target one creature or object.  That creature or object increases [dice] size categories.  An enlarged creature does +[dice] damage, but creatures get a +[dice] bonus to hit them.  If you use four or more dice, you can choose to make the spell permanent.

Focus all the light in the air into a single point.  If it is during the day, it does 3d6 fire damage.  If it is at night, it does 2d6 psychic damage, and anyone hit by this must save or go insane for [sum] hours or until morning.  At all other times it does 1d6 fire damage, unless you are drawing power from a magical spell that produces light, in which case it does damage equal to [dice] 1d6s.

Target creature this has been cast on may reroll [dice] 1d20 rolls.

You levitate [dice] projectiles around you and cause them to orbit your body.  This increases your AC by [dice] if you are wearing protective armor.  Even if it doesn't, if anyone strikes you with a melee attack while you are being orbited, one of the projectiles automatically strikes them for 1d8 + [dice] damage.  You can fire one of the projectiles as an action, but that requires an attack roll.  If you don't have any suggestions for projectiles, then you take 1d6 damage and lose [dice] teeth.

You create a pair of linked portals, each attached to a flat, immobile surface (such as a wall or a floor).  Anything that passes through one portal passes out the other, with momentum being conserved.  You can create a door beneath a creature, but they get a Dex check to avoid falling into it.

Target one creature or object.  That creature or object decreases [dice] size categories.  A Reduced Creature does -[dice] damage but gets +[dice] AC.  If you use four or more dice, you can choose to make the spell permanent.

All creatures within 50' must save vs blindness as the sunlight grows brighter then ever before.  If they fail their save, they are blinded for [dice] rounds.  Wearing protective eyewear grants advantage on this save.

Even if they pass their saves, then they take a -[dice] penalty on all rolls based on vision for as long as the spell lasts.  After the spell has worn off, they must save again.  If they pass, they recover.  If they fail again, their eyes are permanently damaged.  Reduce that creature's COG by [dice].

Pick two very similar objects.  They switch places.  Attended/worn/held objects are allowed a Save.  DM's discretion as to what counts as 'very similar' but they are encouraged to invent a fail chance for borderline cases.

You peer into a creature's future and choose one future you particularly like.  You may then describe that creature's future in [sum] words or less, and three of the words must be "I curse you...".  This future is unavoidable, and will happen soon.

For example, if you say a creature will be driven from their home by their loved ones and devoured by wolves, that will happen soon.  The Referee may alter slight details, times and circumstances, but the spirit of your Curse will come true.  If you Curse someone with death, nothing can kill them until the curse does.  Finally, this does not work on a creature that cannot hear you or does not understand at least one written language.

You can tell someone's fortune by reading their palm, casting lots, or doing a Tarot reading.  Roll 1d6+[dice].  They can use Luck Points to alter this roll.  Then consult the following table.

Horoscope Table
1d6+[dice]
2- Death.  You will die.  The next time you must make a Save against something that could kill you, roll with disadvantage.
3- The Tower.  The Gods are against you.  You cannot gain advantage on any rolls for 1d20-[dice] days.
4- The Moon.  I see grave omens.  You will soon receive a poisoned gift.  Examples include a cursed item, booby-trapped item or animal that requires a large upkeep costs.
5- Justice.  Be very careful, one mistake could be your last.  You will soon be thrust into a highly dangerous situation where failure could mean terrible, permanent consequences.
6- Nine of Swords.  Be careful in your profession, misuse or abuse of your skills will bring disaster.  Soon the player will be tempted with an opportunity to abuse their power.  Should they do so, the consequences will haunt them.
7- Ace of Pentacles. Today is your lucky day.  Today, you can gain advantage on any roll of your choice.  You may only do this for 1 roll.
8- The Hanged Man.  If you manage to keep a cool head, you will be able to get something good out of a bad situation.  Soon the player will be put in a tricky situation.  But if they succeed, the rewards will be great.
9- The Chariot.  When challenged by a persistent foe, persevere and you will achieve victory.  The player will be subjected to an optional trial.  Skipping it will mean nothing but pushing forward will earn a boon.
10- Wheel of Fortune.  Expect a reversal of expectations in the near future.  There is a 50% chance that the player's fortunes will suddenly alter.  If things are going well, then they're about to get a lot worse.  If things are terrible, then expect a sudden surge of good luck.  If it doesn't affect the players, it will affect an NPC they know and have a close relationship with.
11+- The Star. For now, you are under divine protection.  For the next 1d4 days, the player may make any save as if they had advantage on the roll.

It is possible to cast a version of this spell that allows for targeted teleportation, but it requires 10 minutes, a well-known destination, and affects half as many creatures/objects.

When you roll doubles, roll on the Chaos table.  The spell still works and goes through as if cast successfully.  You receive 1d3 Doom Points.

If you roll triples, roll on the Corruption table.  The spell fails and you receive 1d4 Doom Points.

Doom of Fools:  1d3+1 Ghost-Writers (3 HD) immediately appear via gateway and attempt to drag you back to the moon with them.

Ultimate Doom:  As above, except 1d20+20 tentacles (5 HD) of Yosganeth himself emerge from the walls and ceilings within 300' to drag you back to the moon.

This Doom is avoided by drinking the blood of a Sun-Brother, or by playing dice with a Demon and winning.