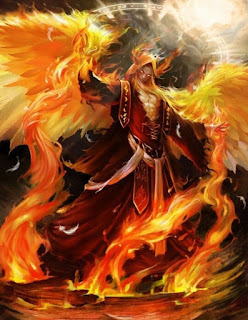 If you have a player who is a Calcomancer and they roll either doubles or triples on their spell dice, have them roll 1d2 or 1d4 respectively, and then 1d20 on the appropriate table.

Chaos Table
1d20
1- Plunge the area into darkness
2- Reverse the elemental damage of any spell for the next hour
3- Something that should not catch fire does.
4- The weather changes.  Reroll on the Weather Table.
5- For the next 1d20+4 hours, any fluid you touch freezes solid.  It automatically melts after that.
6- You attract fire.  The next time a damage spell is cast within 100' of you, it rebounds and swings at you.
7- Your body heats up to 200 degrees Fahrenheit.  This does not harm you, but it will destroy your stuff.
8- All water within 30' boils away.  This does not count water in people's bodies.
9- You gain the ability to eat metal and smelt it in your stomach, then spit out worked metal.  Your stomach and mouth are fireproof.  The rest of your innards are not.
10- You constantly smell like smoke.  -2 to any attempt at sneaking.
11- You become horribly addicted to cigarettes, -1 per day without one.
12- You believe that all trees are evil, and burning down forests is good.  You will never willingly enter a forest, and suffer fear effects when fighting plant/nature monsters.
13- You realize that all mirrors are actually observation devices.  You are being watched.  You cannot let them know.
14- You suspect that someone is following you.  You are correct, but you can't see them.  Everyone else can see the old man with the eyeless sockets, slowly following you.  The next time you invoke Chaos or Corruption, he will attack you.
15- All the money in your possession changes to become Wacky Buxs.  Wacky Bux is a currency only accepted in the fictional country of Astropia.
16- Your spell succeeds, but 1d6 random monsters from nearby are teleported to this location.
17- You get a choice.  Your spell succeeds as normal, but your next failed spell invokes both Chaos and Corruption.  You game?  If not, it just fails.
18- Your spell also draws the attention of a familiar (a five HD Demon).  The Familiar wants to bargain with you.
19- Wizard Vision
20- Your fires become invisible, and do invisible damage.  You can't tell, and neither can the enemies.  It still kills them when they reach zero HP, you just won't realize that until they die. 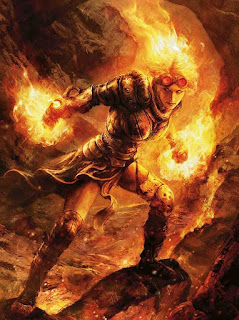 Corruption Table
1d20
1- You burst into flames for 1d10 rounds.
2- You start attracting lightning.  Every time you are outside during a lightning storm, you will attract them.
3- The next time you kill someone with fire, they transform into a Witchbane staff.  If this staff is hurled onto the ground, it will transform into a serpent that hates witches and will try to kill them.  If you are the closest Witch, you count.  The Snake's poison is save or die for Witches, and save vs paralysis for non-spellcasters.
4- The next time you freeze someone to death, they transform into a Wendigo.  Expect it to dig itself up and follow you.
5- The next person to burn alive in your presence counts as a blood sacrifice.  They summon an eldritch horror.  The horror will be disinterested in you unless you fight it, and will carry out its own widely destructive purposes.
6- You see a trio of old ladies knitting.  They pull out a particular thread and cut it with a piece of thread.  This means that someone is fated to die.  Have all the players save vs magic.  The first one to fail is the one who will die.  (This is ridiculous nonsense your brain thought up).
7- Tomorrow, it will rain frogs.  One of these frogs will be a Hostage Frog, and will take one of your companions or hirelings hostage.
8- The next time it snows, the snow will form 1d20+10 Ice Golems who will want to (1d4 1= Kill you; 2= Kill people and offer them as blood sacrifices to you as you are their god; 3= Take you North to marry the Queen of Winter (who may not even exist); 4= Nothing.  They will just rampage and go wild).  It will keep snowing until the Ice Golems are defeated.
9- The next time it rains, a famous mage from the Great War reappears.  He is a from the Austro-Hungarian Empire, and will react to the players with hostility.  Probably.  He speaks Hungarian and German, is a Necromancer, and knows the spells (Detect Psychic Footprints, Fogbank, Army of One, Death Mask, Summon Plague, Speak with Dead, and Break the Chains.)
10- The next fire the players start becomes a fire elemental.  The more fuel it receives, the bigger it grows.  But the bigger the fire, the more maleovolent and intelligent it becomes.  The Elemental will want to live.
11- The next person who dies by fire you caused curses you to "Taste the fires of Hell!"  Until this curse is broken, you take double damage from fire.
12- Your fires are now portals to Hell.  Every time you use Fire, it has a chance of letting a minor Hellfiend through.
Anyone killed by your fires gets sent to Hell.
13- You see an old man marking a calender, crossing off the next day.  He warns your friends to get their Tuxedos cleaned, as there is going to be a funeral.  He will not speak to you.  (The other party members will be able to justify this, you won't.  You won't actually die from this.)
14- Everytime you open a Bible to read it, all you see, printed over and over, is "YOU ARE DAMNED."  Burning a Bible like that would be just about the worst possible idea.
15- An Angel of Yulsilukee shows up.  The Angel is here for your annual performance report.  What, you didn't know about those.  Well don't worry about, we can just take care of the backlog here.  Now let's see, I need you to kill 1d100 people with 1d20+10 days and leave their bodies here.  No, not their whole body, just a skull is fine.  If you fail to do this, your ability will be immediately confiscated, and your deficit will be extracted in other ways.
(Murdering the Angel now would be rude, but it would a relatively minor offense)
16- An Angel of Yulsilukee shows up and informs you that one of your brothers (another Calcomancer or Electromancer, equal chance) has refused to fulfill his quota of murders.  Please go and kill him.  You will receiva boon for this.
17- You learn the location of a rare spell.  But if you proceed to go after it, expect to find another group of Adventurers are already plundering the ruins, unsure of the divine revelation that you have received.
18- You see a skeleton wearing a black robe and carrying a scythe standing outside your window.  As soon as you go looking for him, he vanishes.  He will reappear 1d3+1 more times.  No one else will see him, but they will see traces of him.
19- The next time you wake up, you find a pair of coins on top of your eyes.  These are 50 cent pieces.  The coins are cursed.  If anyone besides you has them in their possession, they will suffer a terrible fate.
20- The next time you finish an adventure and return to civilization, make a fort save.  On a failure, you have a heart attack and die quietly in your sleep. 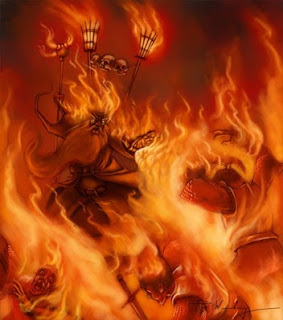