OSR: Biomancers- The Fleshsculptors, the Bone-carvers, the Masters of Meat

The Biomancers are a twisted, ugly lot.  Warped by the magicks they channel through their flesh, they have many extraneous body parts, their frames curdled and corrupted, but sometimes improved, as that is merely how fate's die sometimes lands.

Biomancers are the only Wizards who can heal, though they lack some damaging spells.  To discover what a Biomancer's starting spells are, roll 1d12.  The Spells numbered 13 and 14 are rare spells, each one the equivalent of a magic sword.  The Legendary Spells are all but unknown, and most Wizards do not even know they exist.

Power: Can diagnose mundane illnesses and identify poisons at a touch.

Drawback: Every time you receive magical healing, it has a 10% chance of mutating you. 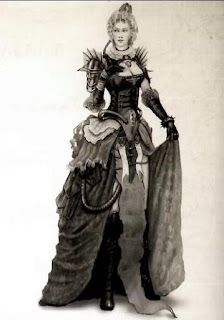 Does [sum] damage to all in its range for [dice] rounds.  Also reduces AC for all those inside by [dice].  Damages all organic material and metal.  Falls from the sky.  Standing under tree-cover or organic material reduces damage by -2.  Cannot dissolve plastic, ceramic, or glass.  Diluted by water.

Target creatures heal [sum] FS and [dice] HP.  They get +[dice] to any STR checks or Saving Throws made within [dice] rounds.

You turn a potion into an obedient homunculus (HD 0). It is tiny (1' tall) and feeble (Str 1), but it can go where you direct and even bring you small items, such as keys. The potion can be delivered by touch or by “drinking” the homunculus. Despite the name, this spell works on any liquid except water.

An unintelligent animal or particularly stupid creature must save vs. spell.  If it fails, it becomes hopelessly enraptured by the Wizard.

Disfigure one creature by molding its flesh into some aberrant shape.  The creature must make a save vs. spell, minus the [sum].  On a failure, they are mutated.  If four or more spellcasting dice are invested in this, then you can specify the mutation.

Target saves or becomes an adorable child version of itself.  Creatures lose [dice] HD and take -[dice] penalties to STR checks and saving throws.  The target is now so adorable that all who see it must make a save the first time they try to harm it. If they fail this save, they hesitate, wasting their action.  After the duration, the target turns back to their normal form.  If this spell was cast with four or more spellcasting dice, the spell's duration can instead be as long as the caster wants.

Target must save or becomes a horrible monster version of itself.  Creatures gain [dice] HD and get +[dice] bonuses to STR checks and saving throws.  The target also flies into a rage, and becomes incapable of tactics, kindness, or retreat, even if urged by friends.  After the duration, the target turns back to their normal form.  If this spell was cast with four or more spellcasting dice, the spell's duration can instead be as long as the caster wants.

Target regenerates 1 HP every 5 minutes for [dice] hours. If a unicorn horn or green troll heart is consumed during the casting, the recipient also regrows all missing limbs and body parts.  (This means that the recipient will regenerate 12 HP per hour.)

Allows the Wizard to speak with Animals, as if they spoke the same language.

Allows the Wizard to speak with Plants, as if they spoke the same language.

[dice] creatures immediately have their bodily fluids become highly venomous.  This applies to everything, blood, spit, etc. Any who are not venomous who come in contact with this poison take [sum] damage, save for half.

You create a humanoid body.  The body can appear however you wish, but anything beyond the ken of a normal human is nonfunctional.  If you do not have all the ingredients, mutilating yourself and taking 1d6 damage will do.


Ingredients Required: 35 liters of water, 20 kilograms of carbon, 4 liters of ammonia, 1.5 kilograms of lime, 800 grams of phosphorus, 250 grams of salt, 100 grams of niter, 80 grams of sulfur, 7.5 grams of fluorine, 5 grams of iron, 3 grams of silicon.  This shopping list usually requires a major city and about 1000gp, but not always.  (For example, niter is extremely common in limestone caverns.

Animate a piece of bread.  All pieces of bread last [sum] days before drying out.  They have HD equal to [dice].  They heal [sum] HP when eaten.  All Bread Creatures are fearless and faithful to the end.

"If it weren't for Mrs. Hammond, they'd be carrying me home in a bucket!"
- Rosco Silverblood, Level 5 Fighter

Doom of Fools:  Gain a minor mutation.
Doom of Kings:  Gain a major mutation.
Ultimate Doom:  Turn into a 1 ton mindless blob that eats everything and continuously spawns creatures from your shattered subconscious.

This Doom is avoided by isolating and removing the essence of Cancer from your body, and trapping the essence within another living vessel.  You could transplant it into something living, or you could use it to create some kind of hideous monster.
By David Stone at October 11, 2017