Nukaria is based on the world of the ancient Near East, somewhere between the time of ancient Summer and the old Assyrian Empire.  This area was characterized by a ludicrous density of peoples, tribes, cities, religions, and etc.  The diversity on display is absolutely ridiculous and that is what I wanted to portray with Nukaria, a great seething cauldron of people groups living in close proximity to each other, migrating, warring, trading and intermarrying with each other, with each of these people groups having a semi-distinct culture, with their own gods and situation.

However, that task is proving to be quite hard, so I decided to make things a little easier on myself, and wrote up a table of the common races in Nukaria.  If I was playing a Nukaria game with someone, you could choose from any on the list below.  These aren't the only races in the world, but they are among the most recognizable.  That's not to say you might not be surprised to meet one of these people, that all depends on each person and culture.  Some people are perfectly fine living among other races, and others keep to themselves, closing them off to foreign influence.  It all depends. 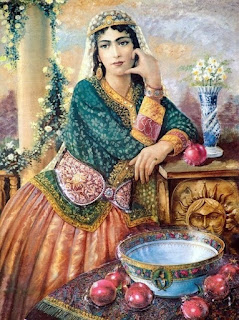 1d20
1- Humans.  The one, the only, they don't need any description.
2- Orzane.  The violent, sensitive pigfolk.  Rulers of the world, even as they fail to rule themselves.
3- Quarrians.  The Blue People.  Cold, quiet moon-callers and star-singers.
4- Elf-Men.  The beautiful, short-lived creations of the Handsome Men.  Riddled with cancers and birth defects, all while looking flawless on the outside.
5- Frogfolk.  Cold and wet, with warm hearts.  Highly honorable creatures.
6- Lizarian.  A highly intelligent, if cold-blooded, people (pun totally intended).
7- Jelly-Eyes (Salamanderfolk).  They're not a creation of a Frog-woman and a Lizarian, as they will insist.
8- Goatling.  When a scapegoat is sent out into the wilderness to carry away a communities' sin, it doesn't always die.
9- Oxmen.  Stoic, proud, disciplined, and consummate vegetarians.
10-  Crocolings.  Cold-hearted, patient people with swift tongues and mastery of dozens of languages.  Beautiful poets, famous for their dry wit.
11- Sluglings.  They are gross and wet, but they're quite inoffensive, if you can manage to get past your initial revulsion.
12- Hoba.  The Little People.  They have nonsense-nations and liar-kings, all while their real settlements are concealed underground or in inhospitable places.
13- Doelings.  Skittish, yes, but also fast, nimble, and kleptomanical.  Watch your coin-purses around them, and set a guard around your vegetable garden.
14- Nekomimi.  They look a bit like Humans, but with cute ears and twitching tails.
15- Brackle.  Plant people who die in a year.  Known for their laconic speech, drug use, and poetry.
16- Dwarf.  Black-skinned people with flowers growing out of their beards.  They're tough, quiet, and collectivistic.
17- Spiderlings.  Everything thinks they're weird, but no can deny their talents.  The best weavers around.
18- Fetchlings.  They have skulls for faces, which makes them quite unnerving.  Still, don't let them frighten you, they're nice, if a bit weird.
19- Cherubs.  Green, skull-faced beings with colorful swirls on their cheeks.  Each single cherub actually has two souls in their body, a "brother" and "sister" who compete for dominance, with one eventually suppressing and killing the other.  They are a solitary race, living alone in the wilderness or in the midst of other races.
20- Greys.  Little grey men.  They have advanced technology that will let them slaughter you, if it actually works.  Their weapons are powerful, when they aren't accidentally blowing up their wielders. 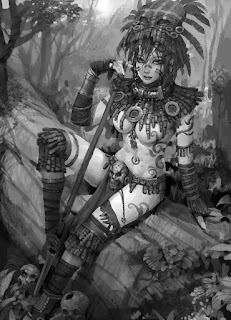 Secondly, here is a table for people you might encounter traveling on the road.  Some of these are hostile, and all are potentially so, but violence isn't the only answer.  Many of them are perfectly willing to talk it out with you.

1d20
1- Troglodytes- Starving Men.  Troglodytes look like deformed humans with tusks, dust-colored hides, and minimal hair.  They specialize in stealth and rapid, brutal assaults.  You won't see them until it's too late.  Want: To kill you for being on their territory or to eat you.
2- Gnolls Huntsmen.  Hyena-men wearing ramshackle armor and carrying scavenged weapons.  They laugh and scream, taunting you from a distance.  Quite unsophisticated, but they do possess a certain brute cunning.  Want: Your worked goods.  Weapons, armor, clothes, and domesticated animals, if you have them.
3- Dwarven Missionaries.  Black-skinned Dwarfs with live flowers growing out of their scalps.  They're eloquent speakers and harsh, unflinching warriors.  Mess with them and they'll beat you with iron cudgels.  Want: to recruit you to come back with them, to the Cold Lands.  They will promise you a quiet, safe life.
4- Mi-Go body-snatchers.  They look normal, and not that well armed.  Currently laden with expensive trade goods or valuable possessions.  Want: To infect you.  Their poorly defended caravan is a trap.  The second you turn your back, they're going to try and infect you with the fungus filling their innards.
5- Quarrian Witches.  Blue-skinned Quarrian women wearing ripped, dirty clothes and traveling without a male escort.  Eagle-eyed and untrusting.  Want: food, survival supplies, and help escaping the Witch-Wardens following them.
6- Goblin Merchants.  Disguised as people of some other type.  Always seem to be smiling, and don't get basic procedure.  Sell impossible goods, memories, dreams, and curses.  Want: to sell you something.
7- Lobsterbacks- poor, Fyrinx-Afflicted fools.  People from the locals area with bulging stomachs and strange, weeping sores.  They demand food.  If you give them some, they will eat it right in front of them, with no concern for their own lives.  If forced to fight, they do so with tears and curses directed at those damn "lobsters".  Want: food, to be freed of the monster riding in their bellies.
8- Flagellants.  A group of traveling religious fundamentalists.  Spent time scarring their flesh, stealing animals to sacrifice, and preaching to each other and anyone who will listen.  Likely being hunted by Paladins or being followed by crowds of eager listeners, possibly both.  Want: To spread the word about their cult.
9- Imperial Road-Wardens.  They serve the Orzanian Emperor.  Their job is to keep the roads open and escort traders.  Sometimes honest, sometimes legitimized highway robbers, not so different than the bandits.  Want: to avoid trouble, to make some coin.
10- Orzanian Equites.  Orzane on horse-back, wearing fancy robes and carrying fancier swords.  They will speak to you and be generous, but if you tick one of them off, expect to be challenged to a duel on the spot.  Want: to read you their poetry, to engage in some civilized conversation, to duel a worthy opponent.
11- Mutants.  People from the local area, but changed.  Mutants are despised and feared by all, expelled from all civilized society.  They survive by selling themselves into slavery or becoming bandits.  This group choose the latter.  Want: clean clothes, warm beds, and wine.
12- Skinchangers.  When a man wears too many faces, his original slips off, leaving nothing but a voice and a will.  A small tribe of shape-shifting weirdos.  Here to show off and mess with you.  Want: To toy with you.
13- Primitives.  They're naked, except for mud and their bone piercings.  They are either defending territory or hunting.  Want: You to leave, or your pack animals (if you have any).
14- Druids.  They hate you, man of the city.  You are guilty of the cardinal sin, symbolic thought.  They will kill you and eat your brain, because you are a stain on the universe that must be erased.  Want: for you to perish.
15- Morcai Raiders.  Morcai are lizard people from the desert.  This is a band of females, looking for husbands.  If they catch you, they will try to take you prisoner and bring them back with them.  Once in their desert homeland, you might end up a breeding stud, if you're lucky enough for a Morcai woman to choose you.  If you're not, you'll likely be sold to a Red Circus and die a violent death for a cheering throng, or you'll be shipped off to work in the mines.
16- Kenku Cultists.  People from the local area with giant bird masks/heads on.  If they ever take them off, they die.  They will follow you, then when questioned, deny it.  They might attack you.  If they do, they will deny it.  Want: No one knows, but they're creepy.  You should probably just kill them anyway, to be safe.
17- Vampires.  They were sent away, and so have clung together.  They hide in the day and hunt at night, spending the day fitfully sleeping in big, fraternal piles, separated by sex.  Want: blood.
18- Amazons.  Amazons sometimes challenge each other to leave their desolate homeland to walk among civilized folk, robbing and plundering and performing brave acts, then fleeing into the night.  Want: the opportunity to prove their bravery and competence as well as directions back home (They're lost).
19- Buffaloboys.  They've got real bad attitudes.  A primitive people, with little interest in politics, philosophy, or civilization.  Want: to be left alone.  Get close and get brutalized.
20- Grey Troopers.  Greys in barely functional war-armor.  Very dangerous, unless you start sabotaging them.  The the armor rapidly becomes a death-trap for the Grey inside. 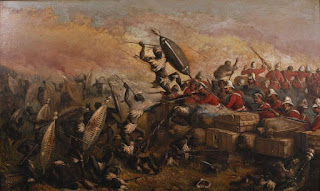 I totally forgot this one, so it's being added now.  This is a table for the general types of languages in Nukaria.  If you want to figure out what language someone is speaking, roll below. 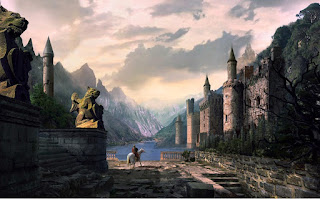