I was going to call this class "Berserker", but then some kindly gentleman informed me of the fact that Berserkers were actually just hired men who wore hair shirts and fought duels on behalf of wealthy lords.  Barbarian was also an unacceptable name as well, as Barbarian just means a foreigner, and this isn't a class about being a fish out of water.  This is a class about flipping out and biting off the enemy's face, before burying your axe in his friend.  So I settled on Carnivore.  I like how it sounds, and maybe you will too.  Either way, here you go. 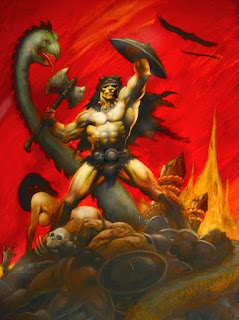 Wild Heart: Your polite facade is just that, a facade.  In moments of great stress, you transcend it and unleash the rage buried in your soul.  When you are unleashing your rage, you get +1 to hit, +1 damage, and are immune to pain and fear.
Additionally, for every turn after you start raging, you do an additional +1 damage.  You cannot do anything cooperative or curative during this time, all you can do is attack other creatures.  You must attack a creature each turn you are raging.  Additionally, if you do not wish to attack any of the creatures before you, you may attack yourself, automatically doing damage as per your weapon against yourself.  To stop raging, you must succeed a WIL saving throw with a penalty equal to the number of rounds you've been raging.

Barely Controlled: Your rage is constantly bubbling up inside of you.  If you in the game and ever begin acting in an emotional way or out of anger, you must save or fly into a rage as per Wild Heart.

Two Attacks: You get a Second Attack.  If you choose to make two attacks, you must divide your attack and damage bonus among the two blows, with a minimum of +0 to attack or damage.

Knock Down: When you successfully hit someone in combat, if you have a remaining attack, you can burn it, forcing them to save or be knocked prone.  Enemies that are knocked prone get a -4 penalty to avoid being attacked by people who are not prone and saving throws based on evading things.

Rip and Tear: As Knock Down, but instead forcing the creature you struck to save or take a persistent wound that does 1d6 damage a round until it is healed or they take an action to staunch the bleeding.

Roar: Whenever you rage mid-combat, you can take an action to try and terrify your foes.  When you do so, all enemies must save vs fear to stand and fight.  Any who have been injured by you get -[sum] damage to their save.  However, if an enemy saves against this ability the first time, they may automatically pass their saving throws against that ability for the rest of the day.

Drag Out: Whenever an injury would knock you unconscious and cause you to take a Horrible Wound, you may save.  You must roll a 1d10 to see if you are able to keep yourself standing until the end of the fight.  You have a 1d10% equal to your level to be able to succeed at this.  Note that you still receive the wound, but it doesn't stop you: yet.

Proud Soul: Whenever you kill something while raging, you may take an action to hack apart their corpse, stand on them and scream, etc.  If you do this, you recover +4 FS.

Marked For Sacrifice: Before you rage, as an action, you may select a target.  For the rest of the battle or the next hour, whatever comes first, you deal +1d6 damage to the target.