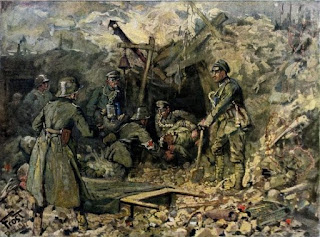 So one of my players informed me that I might have designed a combat system that is too hardcore, mostly due to the new healing rules and the Death and Dismemberment tables.  After telling him he was a pansy, I thought about what he said and decided that he might have a point.  So I decided to include a few additional ways of getting some health back.

These are methods of restoring HP and FS (Flesh and Grit) that do not require magic or special training.  I think I might also modify some of the classes to give them abilities based around helping their allies recover HP.  Looking at you, Investigator.  But for now, here are 6.

Eating a ration while traveling or not taking a long or short rest restores 1d4+CON FS.  Additional bonuses may be offered if the quality of the rations are higher than normal.

Drinking a bottle restores some FS.  A beer restores 1d4, a glass of wine 1d6, a shot of liquor 1d8.  For each drink you take, you also get 1 point of drunkenness.  For each point of drunkenness, you get +1 to melee damage rolls, however, do not add this damage unless the attack hits.  It does not count for the attack roll.  Additionally, your opponents get a +1 bonus to their saves against your firearm attacks and defense rolls against other attack rolls.

Every time you gain a point of drunkenness that puts your total drunkeness over your CON modifier, you must save.  On a failed save, you take 1d6 COG damage.  If this COG damage ever reduces your COG to 0, you black out.

Using bandages automatically ends the Bleeding Out condition.  If applied to someone who is not Bleeding Out, that person regains 1d4 HP and 1d6 FS.

Using a Medkit on someone automatically ends the Bleeding Out, Poisoned or Fatigued condition, unless that Fatigued is caused by mere exhaustion.  If used on someone who is not Bleeding Out, that creature regains 1d6 HP and 1d8 FS.

Note: I'm treating bandages and Medkits like bandages and antidotes in Darkest Dungeon.  Each one fills one inventory slot and represents less potential gold, loot or weapons.  Bandages, once they are used, are consumed.  Medkits can be refilled for a small price.

Restore 2d6 FS and grant an immediate +2 bonus to initiative, potentially elevating you above others and reshuffling the initiative order.

If someone succeeds on a CHA check, he can give a speech that inspires and rouses his allies.  This speech restores 1d6+[CHA modifier] FS and possibly (Referee's Discretion) grants a new save to characters who are Charmed or Frightened, potentially restoring mental ability score damage (CHA and COG).  Inspiring speeches take at least 1 uninterrupted minute and each creature can only benefit from 1 per day.

And before I forget, let me include this little table.

How good is the medical care? 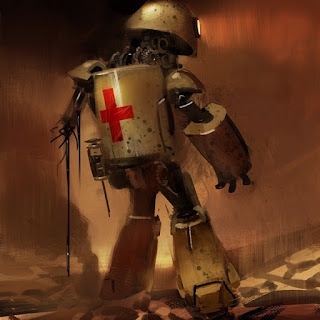