An analysis of the Beverly Hillbillies, episode 1

The Beverly Hillbillies is a shoe about a poor farmer named Jed Clampett who finds oil in the swamp behind his house, and after striking a deal with an oil corporation, he becomes a millionaire overnight.  Then taking the advice of his neighbors, he moves to Beverly Hills and takes his family with him.  Hijinks ensue. 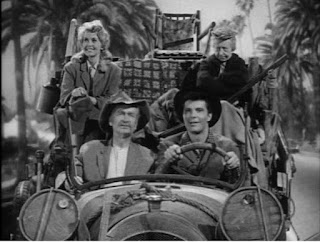 Now the Beverly Hillbillies is basically a sitcom, it is a genuinely funny and clever one.  There are plenty of jokes about how the Clampetts are poor, rural folk, but none of the jokes are at their expense.  The Clampetts are merely normal rural folk in way over their heads, struggling to deal with the problems of their new situation.  But additionally, most of the jokes come from the Clampetts being too practical, polite or pragmatic, not from their ignorance.

For instance, in this episode, Jed asks his cousin Pearl if he should move.  In response Pearl says "Your roof leaks, your fields can barely produce a weed, your house is constantly menaced by possums, skunks and coyotes and your bathroom is fifty feet from your house."  And Jed says "You're right.  I'd be a darn fool to leave all this."

Now, while these jokes are quite funny, they also contain a germ of a subversive idea.  This is a TV show from the sixties, and it almost seems like a mild critique of nifty 50s' era positivity.  The most common image from that decade is the white picket fence, father knows best, 2.5 kids and a dog vision of suburban America.  But that was never an actual reality.  Even in the 50s, poverty was rampant in rural areas, and there were already large ghettos in many of America's major cities.  And so if you think of it like that, the pragmatism of the Clampetts is not only a method of making funny jokes, but also a way of poking holes in the mythos of the 50s.

Of course, that may be reading too much into it.