Clint Eastwood was asked to give a speech at the 2012 Republican Convention, an invitation he accepted.  This was at the last high-point before that particularly meagre campaign season trudged into a bland and predictable ending. 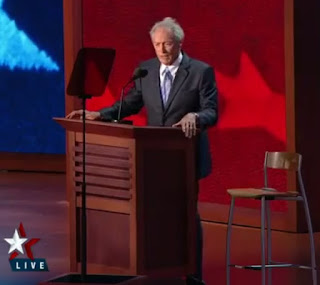 Invention: Eastwood says that President Obama has not kept his promises, and that he is disconnected from the concerns of the people.  He repeats the usual populist appeals that politicians serve the people, and that they do not own America; such power resides within the people.  In a way, he says, we are America.  While these arguments are not particularly inventive, they are familiar, and most partisan lay-Republicans do not consider them empty platitudes, but anoint with nostalgic fondness.

Arrangement: Eastwood's speech is arranged in a conversational style as he interrogates "Obama", as symbolized by an empty chair.  He leans in to certain topics, while others he barely touches on.  "Obama" even occasionally interrupts him, allowing Eastwood to offer some witty asides to the audience.  The arrangement is adequate, but could use some refinement.

Style: Eastwood's style is frank, genuine, and wise.  He appears not like a square jawed cowboy with bombardier blue eyes, but a wise elder, speaking frankly to a younger man.  He does not make any pretension to being special, and this humility he exhibits earns him raucous applause and cheering.  He is imminently cool, even aged as he is.

Memory: Nothing Eastwood particularly said was very memorable, as his speech was largely retreading old ground.  He did everything expected of him, if nothing else.  However, while the specific topic of the speech will likely fade from memory, the actual speech never did.  You see, I first witnessed this speech on live TV back in 2012, and I distinctly recall it, even before I watched it for a second time.  And I can tell you, in my case, time did not dull my memory of it.

Delivery: Eastwood does stumble a few times, and repeats himself maybe twice in the whole speech, but such errors do not detract from the meaning of the speech.  The speech is structured like a casual conversation, and Eastwood leans heavily into this, granting him a bit of leeway.  But he doesn't ruin it with obtuse formality, either.  His delivery is very good.

However, despite the performance of Eastwood and other speakers, Romney lost.  So, in some ways, the speech was not as successful as it could have been.  But a single speech is usually not enough to win an election, and the ultimate fault of that loss does not rest on Eastwood's shoulders, anyway.  But in more realistic terms, the speech had a significant positive impact on the Republican National Convention, so it could clearly be called a success because of that. 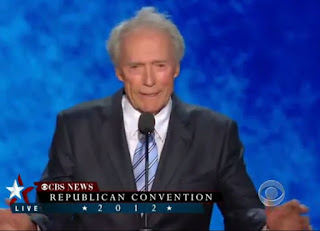 And it made me vote Republican, so I guess that should count for something.
By David Stone at September 15, 2017