Sodden Men and the Drowned

(Note: The Following is a monster from Eldritch Americana, a setting conjured from the brilliant mind of Arnold K.  If you like the monster but the setting does not suit your fancy, ignore it and come up with the fluff on your own.  More information on Eldritch Americana can be found here.

Since Heaven is no longer open, having been taken over by the God-Butcher, and Hell is still unappealing even after their rebranding, most souls linger on the Material Plane, degenerating into monstrous beasts or being devoured by Astral Predators.  But if a body is relatively undamaged, a Ghost can slip back inside it and wear it like a robe.  These creatures are what our ancient ancestors knew as the Undead.  And while many Undead start out as benign, as their bodies rot, they find themselves trapped in a cage of rotting meat, their faculties degrading along with their sanity.  This is why most, if not all Undead, are insane.  And thus, this explains the Sodden.  The Sodden are created when people are drowned or improperly buried at sea.

And while many of the Undead are stuck in the coffins, screaming into the void forever, the Sodden have no such obstacle; being stranded at the bottom of the sea, or trapped in the flooded cabin of a wrecked ship. 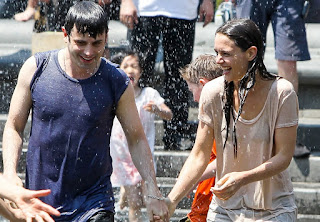 Sodden Men are men and women, soaked to the skin, still wearing the clothes they drowned in.  They are blue with hypothermia, and constantly drip water.  They can easily move underwater, and breathe water, though they will deny this latter fact.

They are those poor souls that are in denial about being dead.  They still cling to their lives before hand, and will insist that they are still alive.  To say otherwise will usually provoke anger, though the Sodden are not easily moved, especially by anger.  But if you play along with their delusions, you will find them to be depressing, if earnest.

Sodden Men will usually tentatively approach the party.  They fear fire and shy away from light.  They will accept the trappings of civilization, and play act like they are still members of that society.

Sodden Men will pursue the party at a distance, and if the Party engages another group in combat, the Sodden Men will swoop in to grab the wounded on either side before they can be killed and drag them off to be drowned.  They believe this will restore them to life (even though they aren't dead, they insist.)

Two things can happen when a Sodden is revealed to be dead (to themselves).  They either accept the reality of the situation, or die.  This can only occur when presented with irrefutable evidence.  Anything else can be reasoned away.  The Sodden are great at mental gymnastics. 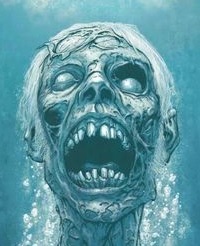 The Drowned are the older cousins of the Sodden Men.  When a Sodden Man accepts the reality of the situation, they either die (as they are dead), or they cling to life anyway.  These latter folk make up the Drowned.

The Drowned are visibly dead, and completely aware of their circumstances.  While the Sodden merely look like waterlogged people in dripping wet clothes, the Drowned are usually clad in rags and visibly bloated, decaying corpses.  If they see you, they will attack, seizing you in their iron grip and dragging you down into the water to your watery grave.  Additionally, if their is no water nearby or if you are too far away, the Drowned will bring it to you.  The Drowned have the ability to touch someone and fill their lungs with sea water.  This is water teleported from the Nightmare Oceans of the Moon, and is unique in its ability to preserve corpses and absorb magic.


Those being drowned by The Drowned, either in water or because of their powers, will start to rapidly age.  The Drowned responsible, on the other hand, will have their body rapidly restored.  Many times in an area infested with The Drowned or Sodden Men you will find one Drowned who looks like a normal, if soggy person.  These Drowned are known for being well mannered, well spoken, and friendly.  Social Drowned are greatly entertained by depressing yarns, dark humor, and polite guests.

The Drowned tend to look with aloof pity at the Sodden Men, who they regard as deluded.  And they aren't wrong.


Drowning Hand: When the Drowned touches an enemy, that enemy must immediately make a Fort save.  On a failure, that enemies' lungs are filled with water.  The enemy takes 1d6 Inevitable* Damage for every round its lungs are filled with water.  Performing CPR on them grants them a new save.  Killing the Drowned Responsible for putting them in state will also cause them to cough up the water.  The Damage done by this ability is undone if the drowning person can flush their lungs of water.

Tactics:
- Start drowning one, then keep the others away
- Concentrate physical attacks on the most lethal
- Maintain good humor

*Inevitable Damage means damage that directly bypasses FS.  If you don't divide HP like I do, just use the normal rules for drowning.