[The following is a compilation of a series of documents transcribed by Interrogator-Lord Marwen of Soliko, agent of His Imperium, the Emperor of Joyous Exultation, Lord Marzan's prayers be upon him.  The information contained within should be recognized as the opinions and thoughts of a law-breaker and do not in any way reflect the opinions, thoughts or desires of His Imperium or the agents of the Emperor or his loyal subjects.

All subjects detailed below are considered outlaws and law-breakers under Imperial Law.  All agents of His Imperium, if they encounter one of the individuals below should make all efforts to seize them, so that they may be brought before a Justice of His Imperium to receive due punishment.  Additionally, if any subject of His Imperium possesses the sufficient strength or skill with arms to apprehend one of the criminals, they should be awarded just compensation by an agent of His Imperium.

For further research, consult File E137-a-2  in the Imperial Archives for more information on the Brotherhood of Broken Chains' leadership and supposed history or File E137-b-56 for information on a particularly relevant group of criminals.  So says the agent of His Imperium.] 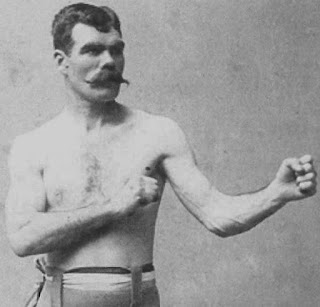 Jem is a human male with a splendid build and manly features, including a bristling mustache.  He is a scrappy, talented fighter, though he is not nearly as strong as he thinks he is.  I sense great potential in him though.  If allowed to bloom, he will grow into a fearsome fighter.  Until then, however, I have left in the care of some stronger Brothers, in the hopes that he survives long enough to prove some use to my organization.

Jem's story is unusual, but also quite simple.  He was a rich man's son in the Young Kingdoms, being educated in music, philosophy and rhetoric.  One day after finishing his lessons, he was returning home with his fiddle when three ruffians attacked him and broke his fiddle.  He flew into a rage and counter-attacked, and to the surprise of everyone involved, the battle ended with the three ruffians sprawled across the ground.  Jem had an unbelievable talent for bare-knuckle brawling, a fact he took full advantage of.  Jem left his old life and began spending all of his time participating, training for, or recovering from fights.  He fought fellow brutes on the street for pride or reputation, he fought people who insulted his family's honor, he fought for money, it didn't matter to Jem.  As long as he got to experience the thrill of battle, he didn't care about the reason why.

That was why he accepted an offer to fight a champion in an underground fighting ring for a substantial prize, if he won, which the recruiter assured him that he could win, even if the last dozen opponents sent against the champ were left strewn about like split firewood.  Jem either believed the recruiter's slanted words or he didn't care.  Either way, he fought the Champion.  Yet that Champion was no ordinary brawler; he was my brawler.  The Champion was so impressed by Jem's potential and obsession with battle that he recruited Jem to come join us.  Since then, Jem has been working for me, traveling wherever I need him to go, fighting my battles and striking down my foes.  Every time he is assigned a mission, I always assume that this is the last mission that he's ever going to go on.  So far, Jem has yet to prove me right.  For the sake of my organization, I hope to continue to be proven wrong.

Weakness: Jem is a fighter.  He lives for battle.  If there is something an opponent could do to make himself stronger, Jem will allow them to do it.  He also has a habit of sparing people when striking ruthlessly at their weakness is the smarter decision.

Hard to Kill: Unless his opponents kill him in some way that leaves him totally, unequivocably dead, then Jem survives.  So unless he is decapitated or bleeds out in front of you, he's still alive.

Tactics:
- Throw jabs, check out how strong an opponent is
- Attack that person
- Never give up

Status: Temporarily Inactive.  Jem bit off more than he could choose last time he was out on a mission and ended up getting nearly run through by a spear.  He is currently in the infirmary, in the loving arms of the Brotherhood's physicians.  If he manages to survive that, recovering from his injuries will be a cake-walk. 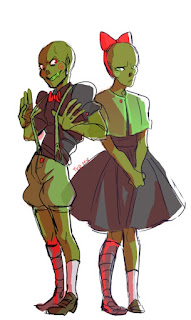 Killane is a Cherub, one of the rarer races in this world.  I had personally seen and talked to a Cherub before, but only once, so it was a pleasure to meet not only one, but two.  This is a privilege I understand most will never have, so I relish it as much as I can.

An agent of mine found Killane wandering in the desolate foothills around the Gates of the South, a rootless scavenger with no companions.  When the Agent attempted to greet this skull-faced stranger, Killane fled.  The agent pursued and questioned him, and Killane revealed that whenever he went to sleep, people around him would die.  The agent wisely took Killane's advice and left him, but then reconsidered and stalked the Cherub from a distance.  Later, when the Cherub laid down to sleep, the Cherub woke up.  This was when that particular Brother learned something new about Cherubim, they are not one but two.

The other Cherub was named Enallik and she demonstrated an undeniable talent for subterfuge, deception and cold-blooded murder.  The Brother followed her, watching her ambush a passing traveler and then feast on his corpse, drinking his hot blood, staining her skull-like face bright red.  The Brother, upon seeing this horrific display, did the only logical thing: he offered her a job.

When Enallik was brought before me, I questioned her on her motives.  I wondered if she was driven by greed or revenge or hatred, but it was nothing so simple.  Enallik revealed, albeit indirectly that she had a complete disregard for the well-being of others, regarding them as nothing more than tools, and an adolescent sense of superiority, as if she knew everything.  A female after my own heart.  Her immaturity was a flaw, but I sensed a great opportunity in recruiting her.  And while training her, as well as keeping her noble "brother" under control has been difficult I am confident that if she survives, Enallik will grow into a splendid member of the Brotherhood.

Fog Burst: As an action, Killane can create a blast of fog that hits someone in the face.  Anyone targeted by this must save. On a failure, the creature targeted can do nothing b ut cough and stagger away.  On a success, the creature gets -1d8 to his next attack roll made against Killane.

Cloud Clone: As an action, Killane can create a clone of any other creature he can see, including himself.  This clone is under Killane's control but it can sound, look and smell like the person it is emulating.  However, the clone is insubstantial and if attacked, it dissolves into smoke.

Tactics:
- Watch from a distance
- Use Cloud Clone to distract and determine who is the strongest
- Avoid fighting good people

Blood Points: Enallik has 1d6+1 Blood Points at any given time.  She uses them to power her abilities.  When she runs out of Blood points, she can no longer use her special abilities.  Biting allows her to regain a number of Blood Points equal to the amount of damage dealt.  She can also drink blood from other sources, as long as it was spilled less than a minute ago.

Superhuman Strength: If Enallik spends 1 Blood Point as a free action, she can increase her melee attack bonus to +4 and her damage bonus to +4.

Sunlight Damage: Enallik takes 1 damage per round that she is exposed to sunlight.  While in direct sunlight, she also cannot use any of her powers.

Tactics:
- Separate your opponent from the group
- Pretend to be weak
- Lure your opponent close
- Rip their throat out
- Flee, then repeat as necessary

Status: On leave.  Killane and Enallik both agree that they will not return to active duty until Jem, Son of Jacobi is fully recovered.  I have agreed to this, but I have also ordered another Brother to spy on them.  Cherubs are highly intelligent creatures who seem endlessly preoccupied with constantly scheming against their counterpart, as well as against anyone else. Additionally, my Cherub expert informs me that if a Cherub agrees with their opposite, this is only because the two are trying to manipulate someone, usually each other, into doing something.  They may be able to defeat each other, but they will not beat me. 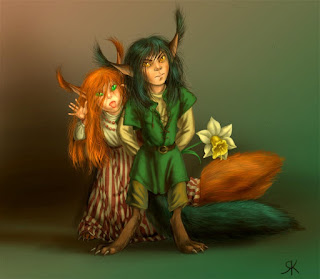 I never for a second thought my organization would play host to a Hoba, but fate has a way of making fools of us all.  Big Byron is one of the Hoba, the so called Little People, only rising to a normal sized creature's abdomen, with long, twitching ears, paws instead of feet and a long, vulpine tail.  He is rather like much of his people, clever, quiet and darkly mischevious.  How he came to work for my organization is a long story and a complex one.  Perhaps this is why I have difficulty recalling some of the details.  I must make a note to speak with Byron

Byron never distinguished himself to my organization, except in the Brightvale job.  Or was it during our operations
near the cliffs of Helia?  Regardless, he was never so great that I felt the need to promote him.  However, he was good enough that I gave him his own team.  I figured, even if he did turn out to be an incompetent, the team he was leading is so small it couldn't possibly do any harm.  And besides, I never liked Alvi of Taqib anyway.  The man was power-hungry and ambitious.

Weakness: Big Byron is actually small.  It's a joke.  If you can get your hands on him, he can be easily overpowered, as he is so much weaker than most people.

Hard to See: As a free action, Byron may make himself hard to notice.  This is sort of like invisibility, but you still see him.  Instead of him being actually invisible, creatures must save when they first see him.  On a failed save, a creature will just automatically overlook him for whatever reason their subconscious can conjure up.  On a successful save, a creature notices Byron as normal.  Creatures may receive penalties to this initial save if Byron is doing something normal, inconspicuous or hard to notice; they may also receive bonuses to this save if Byron is doing something easily noticeable or immediately important, such as attempting to stab the creature in question.

Bite Me: As an action, Byron may force one person to save.  On a failure, that person must attack him next round.

Parry: Once per round, as a free action, Byron may reduce any source of physical damage that could be parried with a whip by 2d4.  He may also choose to not reduce the damage but instead cause it to pass over him and strike whatever is behind or adjacent to him.

Tactics:
- Position yourself so you are between two opponent
- Bait an opponent into attacking you
- Use 'Parry' to make sure they hurt their own

Status: Active.  I forget what he is currently assigned to do, but that's what bureaucrats are for.  Check with them before you finish this entry.