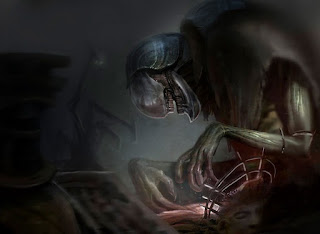 I recently read The Light is the Darkness by Laird Barron and it really inspired me.  I won't say anything more about it, just go read it.  Barron is a great author who is massively underrated.  If you like Lovecraft, Cosmic Horror or anything approaching that general junction, he's your man.

Specifically though, the book made me reconsider my approach to Outsiders.  For a while now, I feel my approach to Outsiders has been too "video-gamey".  Thanks to the harsh distinction between body and mind, they feel artificial, clean.  And while this is okay for Nukaria, I want something different for Sea of Stars.  I want them to be a bit more, meaty.

When you make a new Empty-Man (Outsider/Angel/Demon/Spirit in Sea of Stars) roll on the table below.

Roll on these tables to determine what an Empty-Man/Principality for Sea of Stars looks/acts like.

Why is this creature so wrong?
1d3
1- Was not a Human: This creature is not human but mimics them, but it is imperfect at this.  It doesn't quite understand something fundamental about humanity, this is why people are scared of it, because they know, on some level, that it is a monster wearing a human mask.  The creature's mimicry is 1d4 [1= Terrible, hollow pretense, unmistakeably belonging to an infiltrator or a wicked, vile prankster; 2-3= Distressing for some reason, but can be written off as a strange, or disturbed individual, subtly creepy; 4= Almost, but not quite, something about the person just doesn't feel right.]  Additionally, for this creature, roll on the Multiple Forms table.

2- Is not a Human anymore: This creature was human at some point in the past, but it no longer is.  It has been twisted into something monstrous, but there are still glimpses visible of the person it once was, in its words and mannerisms, cruel japes that seem to taunt the viewer.  For this creature, roll here for a distressing appearance here, then combine it with a normal human appearance.

3- Is not a Human anymore and maybe never was: This creature can mimic humanity, at least for a time, almost perfectly.  The problem is that this disguise is difficult to keep up.  The creature has to struggle to maintain it and eventually, the mask will come off.  In that moment, you will realize your error.  This creature's disguise is very good, but it 1d3 [1= Starts to unravel under certain conditions, such as when the creature is wounded or is under specific stars; 2= The disguise degenerates naturally, over a period of hours, days or weeks; 3= The Disguise is perfect, but some people will be able to see through it.  They won't necessarily see that this creature is a monster, but they will know something is wrong.]

Preternatural Physique: All Empty-Men have enhanced bodies.  They are stronger, faster and tougher than a normal human.  As such, when they roll checks based on their STR, DEX or CON, they add double their normal modifier.  For example, if an Empty-Man has a STR of 15(+1), he adds a +2 bonus to all STR checks and saving throws.

For the rest of an Empty-Man's abilities, consult the tables on the Outsider Megapost, but refluff the abilities to make them less ostentatious.  Sea of Stars is not the type of setting where Wizards cast spells with flashing lights and magic words, so neither should the Demons.  The magic is more like Star Wars (pre-Sequel trilogy) than Harry Potter. 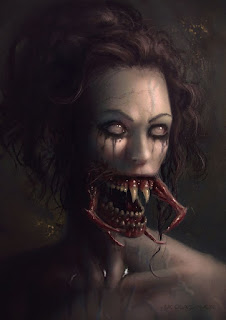 Not all Empty-Men were human, but those that were are proof that one can abandon mortality to become more than human.  The ways of reaching this posthuman level varies from method to method, but it can generally be done in two ways.  Firstly, the simplest way is to be initiated through a ritual that links you directly to one of the Powers of the Emptiness, one of their Principalities or an Empty-Man.  This option is easier, in some ways, but it is also much more dangerous.  Depending on the power and cruelty of the source, you may have to undergo some intense suffering to achieve immortality.  Additionally, not all who undergo such a process are known to actually survive.  Some cannot bear the strain, do not possess the right lineage or for some other esoteric reason, are simply unworthy.  As such, they are devoured by the process.

The second way is to track down various secret methods, created by Diabolic Scholars, Empty-Men or Principalities over the eons.  These methods are concealed in occult tomes, encrypted in otherwise mundane looking conversation, stored on the computers of defunct space stations orbiting dead worlds or dying stars, or carried in the scriptures, minds or carved into the flesh of cultists.  These methods are generally safer than hurling yourself at the feet of some hungry demon and begging for its assistance.  However, they are very well guarded, concealed or hidden: usually some combination of the three.

Here are some methods of Ascension:

1d6
1- Receive a dangerous series of injections that kill 1-in-9 and render 1-in-5 mad, while learning the various secret trigger words.  After each injection, you will need to know what the word is or have someone say it to you.  The trigger word will activate the effects of the serum you were injected with and begin the process of apotheosis.

2- Ritualistically murder a number of people each fitting a specific criteria: a Priest, a Virgin, a Sinner, etc.  Drain their blood and bind their mana to their fluids.  Keep the blood preserved.  Then, under specific astrological conditions, under the stars, recite the words, bathe yourself in their blood and have someone drown you in it.  If done properly, you will rise, reborn.  If not, well, you're smart, you'll figure it out.

3- Find a functional data crystal with a link to the Chatroom.  Then, decipher the mysterious strings of numbers and letters you keep receiving in your inbox.  They're a code that will lead you to perform a series of bizarre actions that do not seem relevant or connected.  Performing a task properly will lead to being given a small piece of information.  If you keep completing tasks, you will realize that they are giving you instructions on how to build a machine.  Each time, the required task will increase in difficulty, from basic to herculean.  Those who complete all the tasks will receive all the instructions for how to complete the Machine.  They will then activate the machine and climb inside it.  Those who succeed will be transformed.  Those who fail at this point die.  Those who fail earlier in the process by being unable to complete a task usually fail because they suffer a psychotic break.

4- Sculpt your body to the point of physical perfection through diet, exercise, surgery and other medicines.  Then, take a much of dangerous, psychotropic and hallucinogenic drugs, have yourself tied to a cross and get a group of semi-sane degenerates to anoint you with the 4 humors, along with some other bodily fluids.  Then have a mystic, shaman, prophet or priest lead the group through the rest of the ceremony.  Then the leader of the ritual should anoint you with the substance. If it works, you will be transformed and the degenerates will come forward to worship you.  If it doesn't work, at best you will have merely wasted time and resources, while at worst you will be torn to shreds by the mob.

5- Retreat to a specific "holy" site on a certain planet and meet with the ancient brotherhood that has dwelled there, protecting the site for untold centuries.  Train with them and learn their secrets, until you unlock their final mystery, what they are guarding.  Master that final teaching and you will emerge as something more than man.

6- Sever your ties to humanity and begin a one-man war against goodness, decency, your fellow man, life, truth, beauty, meaning and God.  When you kill someone, make sure to consecrate the murder to yourself.  Keep going until your mind is so warped the only thing you now understand is power and violence, then arrange circumstances so you die* in the midst of a violent clash or a maelstrom of destruction.  When you "die", if you are strong enough, your body will be healed and you will find yourself buried in rubble, riding in an ambulance, or awaking in the morgue, potentially naked on an operating table.

*Bodily death may or may not be required

Player characters should be allowed to reject their humanity, but this is not like becoming a Daemon Prince, which is a level meant for high-level characters who are seeking immortality.  Only use that option if the character is already high/near level.

Player characters who transform should be much less powerful than even a weak Daemon Prince, starting with a Damage Threshold of 6 with SHP to match.  If they survive long enough, they may be able to get stronger.  Potential methods of getting stronger in this form could involve training with other ascended Humans, slaughtering lesser beings and engaging in sumptuous buffets of violence, being strengthened by other Ascended Humans, Empty-Men, Principalities or one of the Powers by making a pact or serving them, or finding lesser Ascended ones and devouring them to gain their strength. 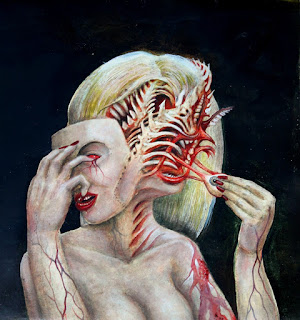 Email ThisBlogThis!Share to TwitterShare to FacebookShare to Pinterest
Labels: Adventuring in the future, OSR, random tables