We've all come to look at America


Let's get started, shall we?

I want you to watch the above, then I will dutifully explain to you what I dislike about this ad for the next 350 words or so.  My main grievance comes at 0:03.  There you see a blond haired woman standing in a suburban park, a girl with similar hair hugging her at the same time.  Now, there's nothing wrong with her or the little girl in of themselves.  But it's what the picture does not show that bothers me.  The little girl bears an unmistakable resemblance to the woman, meaning they are most likely mother and daughter.  This bothers me because I find the way our society tolerates and appreciates single mothers, while denigrating fathers and the nuclear family immensely harmful.

Now this woman is not married, she is a single, working mother, most likely divorced.  Now that may seem a leap in logic, but I will explain why I think so.  First, the woman is most likely middle class, judging by her nice clothes, styled hair, and clean appearance.  This is not a woman who works in retail or blue collar worker.  She has a well-paying, white collar job or she has some other form of income.  Maybe she married a wealthy man and is living off alimony.

And she's obviously older, as her daughter is at least eight to ten years old.  And since the girl doesn't look adopted, the woman is most likely be her biological mother.  And that means there was a man involved at some point.  But he's not here anymore, or at least there's no sign of him.  We can't see the woman's hands, so we cannot confirm the presence of a wedding band.  In past times, it was shameful for a woman to be unmarried like this woman most likely is, and now we lionize her.

And since college educated women of the upper middle class tend to vote Democrat on the majority of issues, this is clearly pandering to that demographic.  But even more than political points-scoring, this is encouraging destructive practices, or at least not condemning them. 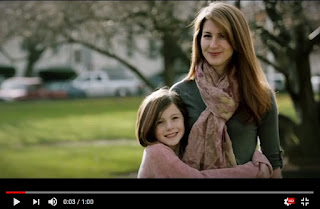