VoDF: Well that did not go as planned

I think I just learned one of the perils of typing out your thoughts before they've had adequate time to metastasize.  I've been working on the Vaults of Dr. Facilier, though it might be better called Facilier's Failed Factory.  In short, my early concept underwent significant evolution, until it basically did not resemble anything that I wrote about in my last post.  But I'm going to push ahead, regardless, as I feel that the foundation has been laid securely enough that such a radical metamorphisis will not happen again.

Dr. Facilier was a wealthy industrialist who founded a company that began to excavate a series of caverns to build an underground factory.  This factory, despite being underground, was rather normal, and passed all safety inspections.  What was strange about the Factory was that it seemed designed to limit the impact the factory had on the world, confining all the labourers underground in a town built within one of the more spacious caverns.  This was because that while Facilier produced conventional goods, he also wanted a safe place where he could research and experiment on the mysterious substance found at the bottom of the Cavern.

The material they found was a substance they named Achorine [Ack-or-eene].  Achorine mutates anything it touches, creating hideous, but improved beasts.  The first few test subjects exposed to Achorine either died, or changed utterly.  The survivor became something utterly removed from humanity; as distant from us as we are from apes.  In later experiments, Achorine was diluted, mixed with water and other chemicals to make a less-potent, but more stable brew.  This is called Accro by the management, or Ace by the labourers.

The factory had two levels.  The outer factory produced conventional goods, namely munitions; but it also had smaller sub-factories that produced in-house goods for the labourers who lived within the company town.  This level was the only one that supposedly existed, and was all above board.  The inner factory was different.  Officially it did not exist, and all the management denied it, or were ignorant of it.  The inner factory was dedicated to producing weapons based off Achorine, and experimenting on human subjects.

But for all the power Achorine brings, it also contaminates everything it touches.  Inert physical materials will be warped through long exposure, and it causes mutation and change in living tissue.  Accro does not cause immense mutation, but even the most diluted type twists the genome of those unfortunate enough to consume it, like a skilled harpist plucking at the RNA.

So the experiments began, but after a while, Dr. Facilier realized that Achorine would only corrupt and pollute everything it touched.  So he decided to destroy it.  But before he could do that, A group of conspirators assassinated the foreman and took over the factory.  Facilier barely escaped with his life, but he vowed revenge.  In his rage, he ordered the destruction of the tunnels to the surface, blowing them up and trapping everyone still in the factory underground.  Facilier managed to cover up the whole incident by claiming it was an industrial accident and that everyone underground was dead, but the ensuing public relations fiasco ruined him, leaving him penniless, his company torn to pieces.  And so the contaminated land was left undisturbed, until recently.

But this is largely opague to the players.  All I plan on telling them is that their is a dungeon underground, and that they should go and raid it.  I wrote the lore stuff to help myself stay on theme.  And the themes I'm working with are abandoned industry, twisted, malfunctioning technology, mutation bringing distance from mankind, and the poisoned fruit of power.

Below is a map of the Vaults.  Each Zone is a mini-dungeon in itself, which I am currently writing.  I will publish the Zones as they are written. 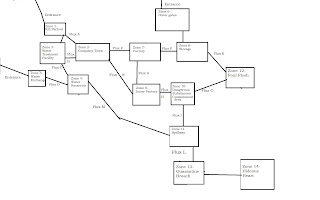