VoDF: A new project- The Vaults of Dr. Facilier

So last night I was thinking about something unimportant, and after reading a stack of Vaults of Vyzor actual play reports, I thought I would shamelessly steal- I mean make an homage to it.  So I started writing, and this is what I came up with.

"A man named Dr. Salvador Facilier discovered some hidden catacombs in a ruined district of his home city.  He and some of his pals ventured down into the catacombs to see what was up.  Of the five that went in, only Dr. Facilier returned.  He returned with a few treasures, some disturbing stories, and an obsession.  Dr. Facilier would make five more delves into the dungeon, before he went irrevocably insane and was confined to his family home where he still lives, under close supervision by a physician.  But before that, he founded the Ground-floor or Lower Demolition, Inc.  GOLD, Inc. still operates today, hiring expendable pawns to go down into the dungeon and plunder the vaults discovered by the good doctor of any potential treasures."

For about seven minutes of work, that's not bad.  But before I go any further, let me set a few guidelines. 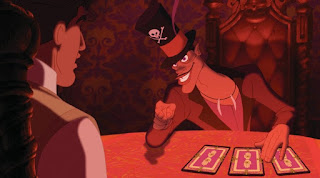 And yes, I was watching princess of the Frog

Firstly, this project, which I will be tagging VoDF until I can come with a better name, is not meant to be high art, or even medium art.  I am creating it with the intent that this can be the D&D equivalent of a game of pick-up basketball.  There will be continuity between each session, but it doesn't depend on a regular group of players regularly attending to work.  People should be able to easily drop in and out, with minimal hassle.

Secondly, it should be modular.  The Vaults will be constructed using Paper and Pencils' flux space concept, meaning that it is essentially a bunch of small dungeons connected by various passageways, secret doors, and etc.  But the Vaults should still have some connection to each other, so that they complement each other, but you could still remove one and use it as a small mini-dungeon.

Thirdly, it should be low-effort, but still fun.  I don't plan on putting a lot of work into this, it's just meant for wine-and-nachos fun.  So that means Goblins, Elves, Dragons sleeping on piles of gold, all that stuff.  But I'm still going to throw in a few curveballs, because that's just how I roll.

Four, it will have Roguelike elements.  Most editions of D&D and their clones have de facto permadeath, so that's not an issue.  But I also plan on introducing a few others, such as the ability to work toward some collective goal, and permanent upgrades that any party member can use.