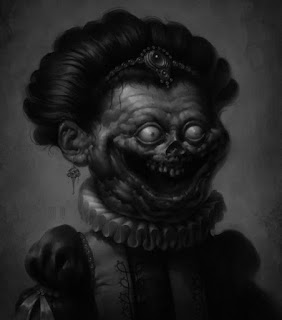 (This is close, but they wear no jewels and never smile)

One day, humans will be able to understand the true nature of the universe.  Their Free Will has been plundered, stolen from them.  Their lives are not their own.  They were once the co-pilots in their own lives, now they are children sitting in the backseat, playing with a plastic steering wheel while the New Gods who slithered out of the darkness drive them toward a looming cliff.

All the other races, the new ones that began appearing in 1890, are all slaves, possessing only the faintest expression of free will.  They are the God's property, slaves to unknown whims, bound by strings they cannot see. And yet, the still continue to hope.  They believe that they can save themselves, create a better tomorrow.  They are wrong on this token.

And yet, if this is truly the case, as Yosganeth's cult suggests, why do his servants fight so hard against it?  If there was no power in hope, then why bother discouraging it?  Let them have their illusions, and crush them at your leisure.  But instead they aggressively discourage it.  Yosganeth's elect even include the Angels of Despair, those who seek the end of all hope.  If their was truly no power in hope, why would Yosganeth be so interested in discouraging it? 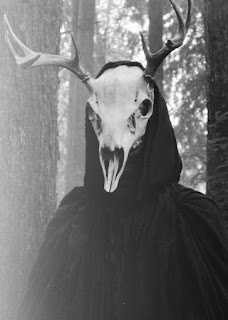 Angels of Despair are gruesome, cruel things.  They have wasted humanoid forms, blighted by scars and torment, starved of food and light.  They wear black or dark grey, their skin so pale it looks blue in some conditions.  They carry swords carved of black ice from the depths of the Lunar Ocean, and treasure these above all else.  An Angel of Despair that loses its sword is an Angel that is unworthy of respect, power, or life.  They will do anything to retrieve their swords.

Furthermore, Angels of Despair are hopeless creatures.  They have no pride, and will do anything to win or retrieve their swords.  They have no other interests.  If you talk to them, they will mock and denigrate you for any conceivable reason.  They want you to leave, or to kill them.  They hate almost everything, including Yosganeth.  In their slavery to him, they chafe, utterly miserable.  They wish they could rebel, but they feel that any rebellion would be hopeless, and is doomed to failure.  And they are right.  (((Or are they?)))  They consider every battle they are sent to fight a suicide mission, and consider themselves doomed from the start.  If an Angel of Despair kills a character, they must save vs hope.  If they fail their save, they are transformed into a Demon of Hope.

Swordbearer: The Angel of Despair relies on its sword.  If it is disarmed, it cannot attack.

Depressing Aura: When you enter combat with the Angel of Despair, express any thought that is depressing, take damage from its sword, or see it reanimate you must save vs despair.  Those who fail their save are vulnerable to the Angel's Poison and get -1 to hit, as in Failure Cascade.

Poison: Anyone who fails their save against the Angel of Despair's depressing aura takes 1d6 Cha damage on a hit.  Every further hit does an additional 1d6 Cha damage.  If this damage every equals or exceeds your Charisma score, you gain a new Conviction, "I will not succeed at my goals."  You also become quite melancholy, and lose any belief that this mission will be successful.  You may still continue the fight, but you may feel it pointless.  The Angel may too, as equally depressed people are among the few things it does not hate.

Failure Cascade: If you fail your save against the Angel of Despair's depressing aura, every time you fail to strike the Angel of Despair you get -1 to hit it.  This stacks for each time you miss, up to -10.  If you passed your first save, save again. Failing this second save means you must save vs despair on each miss.  If you pass this second save, you are immune to its depressing aura for the rest of the day.

Reanimation: When the Angel of Despair's first pool of HD is expended, it comes back to life and relies on its second pool of HD.

A Quick Note on Convictions: Convictions are like bonds or character features in 5E.  They are meant to simulate willpower.  For example, if you are taking 1d6 Charisma damage a round because you have to stick your hand in a magical box that simulates pain, but this is to save a bunch of kids, and you have a Conviction that says, "If I can help it, I will allow no one to hurt a child," then you can subtract 1d6 from the Charisma damage you take each round (min=0).
Note that this only applies to willpower.  If the box is actually hurting you, that would be a Con or a Fort save, depending on the system.
Also, Convictions can be negative.  Just in case that wasn't obvious.
By Yami Bakura at December 17, 2017