Eldritch Americana: A note about Undead

Making lots of different stat blocks and different fluff for various types of undead always seemed silly to me, in the same way that having gnolls, orcs, and any other Chaotic Evil, basically unreddemable militant savage race in a setting was just redundancy for redundancies sake.  So for Eldritch Americana, I decided I'd avoid that.

What are the Undead?

When you die in Eldritch Americana, as usual, a Psychopomp comes to collect your soul.  Depending on your race or religion, it could be anything from a volunteer wrapped in barbed-wire manacles to a giant, crystal insect.  That is, unless you are a human who has no divine affiliation.  As the God of Humanity was killed long before you were born, Humans with no God to protect them will be left adrift the astral sea, with no one to even condemn them to Hell.

So some of them attempt to return to life.  They climb back inside their bodies and attempt to continue as they always have.  But as their bodies continue to degrade, the Undead find themselves trapped, their mental faculties degrading as their brains do.  These Undead usually devolve into feral beasts, or transcend their humanity and maintain their intelligence, even as their superegos wither, leaving them with weakened emotions, little empathy, and no morality.

Note that Humans aren't the only ones who can become Undead, with the exception of Loonies, this a problem for all races.  But Human (corpses) make up the majority of Undead.

How a person died with determine what kind of Undead they became.  Those who drown or are buried at sea will join the ranks of The Sodden or the Drowned.

<Diggression>
This is the Base Undead Statblock.  When determining what Undead to use, copy it down and then note whatever abilities these Undead have.

When someone dies in the gutter, or is flung into the sewer and left to rot, sometimes they die.  When they don't, they become Glass Ghouls or Concrete Angels.

Glass Ghouls are humans who died as above, but for whatever reason deny that it killed them.  Murder victims waking up after being stabbed and walking away, or insisting to be taken to the hospital, even for obviously fatal wounds.  While they are cold to the touch, and will soon begin to decay, at first glance they appear totally normal.  Many a murder investigation has been delayed when the corpse snuck off when no one was looking.  Glass Ghouls use weapons, and no special abilities beyond what they had in life, though any who could cast spells while alive lose that ability now.  For the first 24 hours, a Glass Ghoul looks like a pale, cold person.  Only touching their skin will reveal the fact that they are dead.  Glass Ghouls understand this on a subconscious level, and will resist any attempt by you to touch them.  They tend not to fight, if they can avoid it, and are only as violent as they were in life. 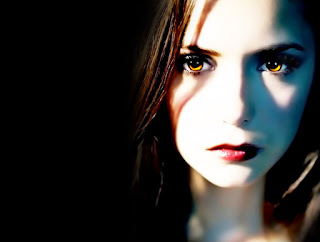 Concrete Angels are a different story.  They can change their skin to the texture, color and density of stone.  They can walk through stone like its water, though loose soil traps them.  They do not rot, instead gradually petrifying.  They can also turn people to stone with a touch, though this only lasts as long as they make contact with the person's bare skin.  They can permanently petrify someone, but this takes much longer, and is not an ability useful for combat.  For this reason, one of the treasures of the Concrete Angel is usually the petrified bodies of adventurers and other victims of the Angel.  If the petrification can be reversed, those turned to stone by a Concrete Angel will be as healthy as they were when they were petrified. 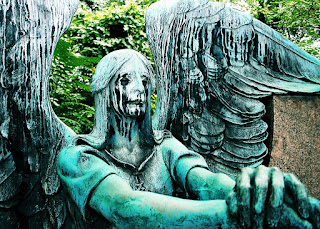 So you captured Grandpa's corpse, made sure it didn't sneak off, and rather then risk a sea-burial, you locked him in a box and buried him under six feet of dirt.  That will teach the old fart to not die!  Problem solved, right?

Well it is solved, for now at least.  But in a few years, Grandpa might dig himself out of ground, and come looking for you.  And he'll have plenty of time to think about what he was going to do to you.

The Earthly Dead come in two varieties, Spore Carrier and Worm King.
Spore Carriers have poisonous flesh and fluids, those considering they are rotting, moving corpses with growths and fungi visible all over their bodies, its doubtful anyone will be trying to eat them.  Spore Carriers can release clouds of spores in a thirty foot cone, or in a ten foot cloud around them.  They can do this once per hour.  To see what their spores do, roll on the following table.  Spore Carriers are perhaps the dumbest undead, with little ability to speak and think.  This is because their lower soul, the ID, the one that usually only regulates instinct, has absorbed the soul of a fungus, or perhaps partnered with it.  Spore Carriers exist only to propagate their spores, as they think they are fungus. 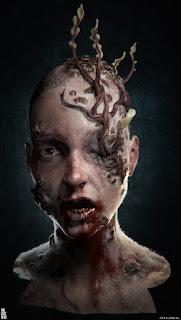 Worm Kings are essentially the same as Spore Carriers, with one important exception.  While Spore Carriers have no upper soul to guide them, and are merely moving on muscle memory and fungal genetic programming, Worm Kings have an upper soul that subordinates the ID and the invading fungal souls.  They can perfectly understand why people run and hide when they come, but they are to far removed from humanity to care to listen.
Worm Kings are similar to Spore Carriers except they each get two kinds of Spores.  Select one from the table above, and one from below.
What horrible toxins is the Worm King carrying?
1d4
1- Madness Spores.  Anyone who enters this cloud must save or take 1d6 Intelligence damage.  Those who fail their saves take an additional 1d6 Intelligence damage for every round spent in the cloud.  If this Int damage ever equals or exceeds your Intelligence score, you become stark raving mad.  But since this is a shared madness, all the affected will have it.  I would recommend something that either seems reasonable, or something totally out of left field.  For example, have the affected all switch character sheets and then shuffle the names around.
2- Fear Spores.  Anyone who enters this cloud must save vs fear.  Those who fail their save take 1d6 Charisma damage.  For every round spent in the cloud, they take an additional 1d6 Cha damage if they failed their save.  If this ever equals or exceeds their Charisma score, the affected will flee, in the safest and most expedient way possible.
3- Acid Spores.  These spores contain acid, not the type of compound, but the drug.  All those who inhale the spores start having wild hallucinations, no save.  And that doesn't sound hard, so try shooting straight while you're tripping out.  5% chance of a bad trip.
4- Death Spores.  Any who inhale these spores must save.  On a failure, the affected take 1d6 Con damage as the spores weaken them and shred their insides.  They take an additional 1d6 Con damage per round spent in the cloud.  If this damage ever equals or exceeds your Constitution score, you immediately drop to zero HP and start dying. 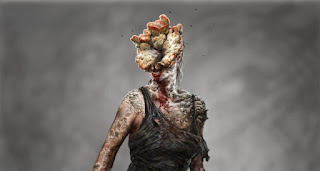 Okay, well clearly the best thing to do is just cremate all the bodies, right?  Cremation is the most effective way to prevent a body from reanimating, followed closely by thorough dismemberment.  But since the latter is considered quite rude, cremation is preferred.  And done properly, cremation can prevent any posthumous resurrection.  But like all things, mistakes are made.  If the fire isn't hot enough, or the furnace improperly built, or due to unforeseen circumstances, the corpse isn't tidily devoured by the flames.  The Undead who rise from these circumstances are generally considered the most fearsome and deadly of all, and not just because they set everything they touch on fire.

There are two varieties; Ashen Dead and Embersons.  Ashen Dead are blackened and cracked by fire, like a hotdog that fell down into the coals and burned on the embers for hours.  Ashen Dead absorb fire and take no damage from it, burning for a number of turns equal to the damage dealt.  They also leech water from anything they touch, as they are so dessicated.  Ashen Dead are desperately in pain.  They beg those they pass for help, thanking God for helping them to live in one hand while cursing him with their next breath.  They will curse you the same, if you refuse to help them.  And you should help them.  If you do not, they will hunt you down, kill you, and bathe in your blood.  It's the only thing that brings relief to their pain. 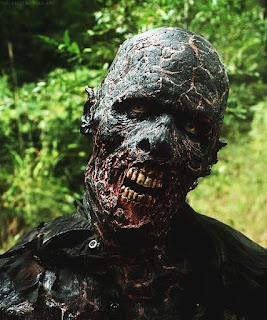 Emberssons are different.  They know they are dead, and for being all they want but cannot have, they hate you.  An Embersson will kill you, screaming obscenities at you as you die an agonizing death at their hands.  But after, they will be quite mournful, realizing their sins.  This grief is genuine, but never lasts long.  For this reason, Emberssons almost never work together, as others are not only a reminder of their own sorry state, but of their sins.

Emberssons devour fire, as it heals them.  They also constantly burn, doing additional damage and setting anything flammable they touch on fire.  They fear water, and will not go within 30' of it if they can help it.  Emberssons can also spit fireballs and leap in and out of fires like they are doorways.  Wherever they are, their is always the crackling of fire and the smell of burned meat. 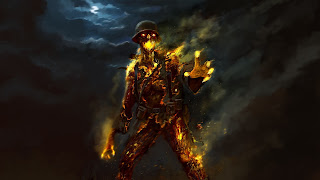