Eldritch Americana: The Property of Yosganeth

<blog update>
I meant to write a series of posts about Yosganeth in December, detailing his servants and enemies, but the Angel of Fate isn't finished, and I haven't a clue what do do about the Demon of Freedom or Hope.  So don't expect those for a while.  This will be my last post on Eldritch Americana for a while, probably, and definitely my last post relating to Yosganeth.
</blog update> 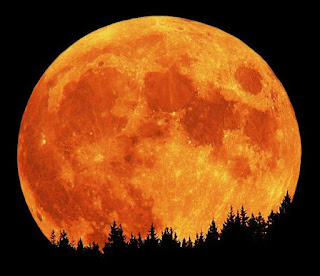 Yosganeth is the only one who possesses a semi-legitimate claim over the Moon.  Since the Moon seems to have gained an atmosphere, oceans and plant life after 1890, many people believe that it is potentially livable, and their has been much debate over attempting to colonize it, or at least explore it.  And while this is true, the first official attempt won't be made until the mid-1960s.  But there are ways to get to the Moon.  The first is to teleport there.  The Teleport spell can take you to the Moon, provided you use at least four dice and it is a clear night.  The second way is to find one of the mad tinkers living out in the abandoned heart of America, or in the Ghoul-gator infested ruins of Florida and ask them to build you a rocket.  Such tinkers are blessed with madness and genius in equal amounts, and thus, the more insane they are, the more likely their ridiculous contraption actually functions.

Once you reach the Moon, you will find the blue-green plantlife and red-black oceans you saw through a telescope are quite real.  You will also find that the Moon is populated by vicious beasts that no one will recognize from earth, only characterized by brutal savagery and too many teeth.  To create a moon beast, just open up your favorite book of Weird monsters and reskin them to make a suitable beast.  I recommend Veins of the Earth or Fire on the Velvet Horizon. 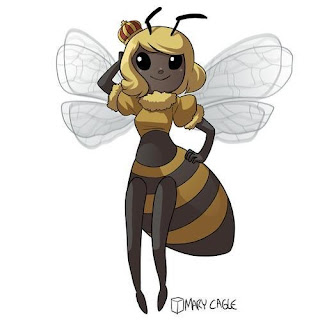 (Actual Bee-Ladies don't look this cute, but this is an OSR blog)

Yosganeth's creations.  Since they are patterned after humans in the broadest sense, they are humanoid, bipedal, breathe oxygen and exhale carbon dioxide.  They inhabit the Moon as the only intelligent species that has a real foothold on the Moon.  They can be seen flying around the Moon, hunting with stone-tipped spears or bringing game back to their elaborate, communal caves.  They are a highly social species, building large, communal structures with small cubicles for each individual.  They communicate with each other through hand-signs and pheromones.  They do not speak, so when outsiders approach, they will attempt to communicate through playing charades and interpretative dance.  Most Bee-Ladies born on Earth will know English or another human language, but these ones will not.  Additionally, they tend to be less civilized, and will usually only suggest you leave once, before they start chucking spears.  They seem to have either no or an extremely primitive culture, though their level of social organization and control suggests and incredibly authoritarian tribal government.

You can play as one, of course, but all Bee-Lady PCs are female.  Male Bee-Men are too large and stupid to be PCs.  They are similar to small dragons, being able to fly, sting multiple times, and are covered in thick, chitinous plates that repel all but the hardest weapons.  When a Bee-Lady Queen lays all of her eggs, she must consume the tissues of a Bee-Man to continue the colony.  So she rallies her sterile daughters and they go and hunt the Bee-Man in huge, elaborate war-bands, tracking the Bee-Man for days as he attempts to evade or slaughter them all, as Bee-Men almost never survive the breeding process.  But since only a male of a certain age will do, any male sons the Queen has will be run out of the colony once they can survive on their own, and besides, it would be gross to Bee-Ladies if a Queen would breed with one of her sons.

Bee-Ladies on Earth tend to live in smaller, communal groups out in the wilderness.  They generally do not interact with normal society, as most cannot read and all cannot speak.  Many people have heard of them, but few know anything about them, except for the fact that they have elaborate dances, a matriarchal tribal structure, and they love sugar.  Bee-Men are found on some parts of Earth too, and plague many frontier areas, hunting cattle and settlers in equal numbers.  The fact that the Military or Adventurers are often asked to hunt down these "dangerous beasts" limits the population of Bee-Ladies on Earth.  Most people do not know that these beasts are in fact the mature males of the Bee-Ladies, and thus most people have no idea how they reproduce.  People who aren't Bee-Ladies call these beast Hornet Kings.

Stingers: Anyone stung by a Hornet King must save.  A successful save means they take 1d6 poison damage.  A failed save means they are paralyzed and cannot move.  You may save again on your next turn.  The Hornet King can make up to 3 Stinger attacks a round.

Tactics:
- Sting everyone
- Bite those who fall
-  Never Surrender

- They can't fly (Earth is too massive, too much gravity, etc) but you can use your wings to push off the ground and jump 30' straight up.  You can also use this to jump a horizontal distance of 60'.  They can fly on the Moon or in a similarly low-gravity environment.

- Possess a sting attack, (1d6 + save or die), but you die after using it unless you get powerful magical healing sufficient to repair a lost limb or massive internal trauma.

- You can store stuff in your second stomach.  you can store about as much stuff as a large chest.  You are only negatively affected (in terms of weight) if you are carrying a bunch of gold bars or bullets or something similarly heavy.

- Do not speak.  Communicate through interpretative dance or sign language.  It takes a minute to speak a sentence.  Mid-combat, or in some other high intensity, short-term activitiy, you must make a Cha check to be understood.  Mimes can always understand you, if they've spent more than a day around you.

- If you have Cha 13+, others never have any trouble understanding you.


The Palace of the Moon

(Yosganeth's real Palace would probably be much tackier than this)

This is the only structure of any real complexity on the Moon.  It is several miles tall, and is visible from Earth, even without a telescope.  It is a mansion of immense size, surrounded by gardens and fountains, but almost no one has seen the inside and lived.  The only way to see the inside and survive is to be immensely powerful, or be invited inside.  And while securing an invitation to the Palace is basically impossible, breaking in and surviving is an even more narrow prospect.

Once inside you will find a maze of residential halls, kitchens, feast halls, and offices.  The inside of the Palace is a terrible place, where all the Wicked (by Yosganeth's standards) are taken after death, to be cooked as food and served to his friends.  The offices are  used to similar effect, as that is where the Ghost-Writers live.

The Ghost-Writers look Bee-Ladies, but are anything but, in the same way that The Angels of Christianity are more than buff Europeans with wings.  While Yosganeth is the Author of Fate and the Weaver of Destiny, he does not have the time nor interest to personally write every detail of every person's fate.  As such, he delegates this power to the Ghost-Writers, who are tasked with writing the fate of the child who freezes to death at eighteen months, or the adventurer who walks into a dungeon and gets disemboweled by the first blade trap, then spends the next fifteen minutes bleeding out while his companions get chewed on by Undead. 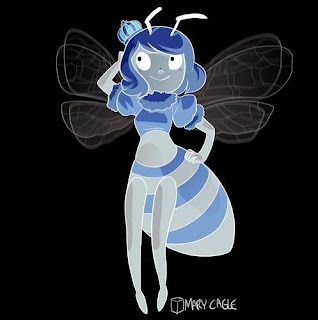 (Ghost-Writers look like Bee-Ladies, but with black and white fur, ghostly white skin, and their wings are grey and covered in silver threads)

Sting: Anyone hit by the Sting must succeed a saving throw or die.  If they live, the Ghost-Writer is allowed a save.  If she passes, she lives.  If she fails, she dies.  If her sting kills someone, she automatically fails her save.

Flyer: +4 to Initiative.  Ghost-Writers can fly anywhere, not just in the Moon's low gravity.

Tactics:
- Use your Sting on the strongest looking target
- Do not use Stings if you don't outnumber the enemy
- Two per enemy
- Fly away if more than half die

The Cosmomancers all receive their powers through a spiritual connection to Yosganeth.  After death, he will come to collect, and his servants will come to drag the Cosmomancers back to the Palace of the Moon, where they will be served as food for their master's pleasure.  Most Cosmomancers are blissfully unaware of this.

The Doom of the Cosmomancer

The Doom of Fools: 1d3+1 Ghost-Writers (3 HD) immediately appear via gateway and attempt to drag you back to the moon with them.  Ghost-Writers still possess the fatal sting of the Bee-Ladies, but will only use it on enemies.  The point is the bring the Cosmomancer back alive.

Ultimate Doom:  As above, except 1d20+20 tentacles (5 HD) of Yosganeth himself emerge from the walls and ceilings within 300' to drag you back to the moon.
By Yami Bakura at December 27, 2017