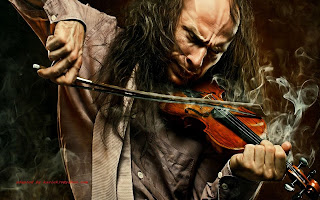 "When legendary jazz musician Howlin' Jimmy Jefferson was dying of strange swamp fever, it is said that he recorded one last album, smearing a drop of his own blood on the record. The album itself is lost to time but, in making it, Jimmy liberated his soul to wander the world as the Spirit of Jazz. To this very day, his apparition has been known to appear to aspiring musicians, offering them a piece of its power in exchange for ownership of their souls."

An ordinary Jazz Musician would be bad enough, but some fool decided that giving a few of them powerful magick would be a good idea.  Depending on who you ask, the Jazz Wizards are a blight on society or the greatest thing to happen to dance clubs, infecting or uplifting with their seductive, ethereal beats.  These Soul Shamans are empowered not by a Primordial God of Chaos but by a far smaller, more mysterious entity, which claims to be a legendary musician, long since past from this world.  This petty deity is far less known, with fewer cults and Wizards than the Greater of the Eldritch Gods, but its name still carries great weight in the Deep South, and in jazz clubs all across America.

The Jazz Wizard has a very unusual suite of spells at their disposal.  Similar to the Cthonomancer, they have few direct damage spells, but with some clever thinking, a Swing Witch could be just as dangerous as any Snowman, with far less need for fire insurance.

Jazz Wizards have the following Power and Drawback automatically, and pick their starting spells from the following 1d12 table.  Spells 13, 14 and 15 are rare and as valuable as a magic sword, and cannot be acquired at start, but only found through quests and dungeon-delving.

Power: If you play music for someone, they must succeed a morale check to continue hurting you or hurt you (roll under their morale).  On a failure, they find themselves unwilling to hurt someone so talented.  They might not help you, but they'll certainly stop hurting you.

Drawback: If you haven't drank any alcohol within the last 24 hours, you lose a Spellcasting Die.

Jazz Wizard spell-list:
Starting Spell(s)
1- A kiss in the Dark
2- April Showers
3- Combustication
4- Dancing in the Dark
5- Dream a little Dream of Me
6- I ain't got Nobody
7- I'll Build a Stairway to Paradise
8- It's only a Paper Moon
9- Rhapsody in Blue
10- Soul of Things
11- Sweet Georgia Brown
12- Two Black Crows

Creates a semi-corporeal illusion of the Wizard.  The Wizard can move and see through this illusion, and the illusion can touch and manipulate objects.  However, the illusion cannot damage anything and if it takes any damage, it pops like a bubble and disappears into a cloud of multi-colored smoke.

Creates a rain of any liquid you desire in a circle [dice]*10' on the ground.  The shower lasts dice rounds.  This cannot produce any acid strong enough to harm someone.

You designate an action, type of person, or concept.  For [dice] rounds, anyone respectively, carrying out that action, being that type of person, or engaging with that concept within range lights on fire, taking 1d6 damage a round.  These flames can be extinguished as normal fire.  This spell does not differentiate between friendly and non-friendlies.

For [dice] rounds, [dice] creatures get a bonus equal to +[dice] to any damage rolls they make, as long as they are attacking another creature affected by the spell.

This spell can only be cast on sleeping creatures.  When cast, [dice] sleeping creatures have a dream about whatever the Wizard wants them to.  If you invest four or more dice in this spell, then you can cast this spell on anyone, even if you are not near them, as long as you know their name and they are sleeping.

If you are alone, this teleports a person to your side.  This is just the nearest person.  If you invest three or more dice into this spell, you can choose the person who comes to you.

Creates an escape route from danger.  Can help you escape an enemy, social faux pas, or more esoteric dangers.

Teleports any object or person up to [dice]*10' away and replaces them with a paper model.  The paper model is clearly not them, though at a distance this might be hard to tell at first.

All within range regain [sum] FS.  All bad moods within are dispelled.  Additionally, if someone is under a temporary mental effect such as Charm, Fear, this spell grants them a new save.

You imbue one non-living object within range with sentience.  This object is friendly with you, though it is not compelled to obey you.  But the object will be well disposed toward you, unless you prove yourself dangerous.  The object can now move and speak.  For combat purposes, it has HD equal to [dice] and AC equal to [sum], and makes attacks at 1d6+[dice].
If you invest four or more dice into this spell, you can instead choose to make the spell's duration permanent.

Creates [dice] gallons of sauce.  Anything that this sauce is applied becomes irresistable.  Strong willed beings can resist, but any weak-willed beings must make a Save minus [dice] in order to avoid eating it.  If applied to a living being, carnivorous or cannibal monsters subtract 2*[dice] from their Save.


This spell  summons a murder of Crows [sum] birds strong.  The Wizard can control these Crows and make attacks with them as a free action.  The Swarm of Crows can attack an enemy within range for 1d6 damage, and their attacks automatically hit, unless the enemy is using some kind of defense that the Crows cannot get around (such as setting themselves on fire, being behind something they cannot fly around, etc).  The Swarm itself has 2*[dice] HP, and takes full damage from area of effect abilities and only 1 damage from something that could hit one of them.  For purposes of attacks being made against them, the Crows have an AC of 10+[dice].  Finally, if four or more dice are used to cast this spell, the duration is permanent, and the swarm of Crows remains with the Wizard until they are killed or dismissed.


Note: There are other variations of this spell that summon other types of birds, such as pigeons, quail, macaws, parrots, bluejays, robins and vultures.  However, these other variations are considered more rare, and thus more difficult/more expensive to acquire.

The Wizard casts this spell on their shadow.  Their shadow then animates, falling under their control.  The Wizard can then take a bonus action for each round the Shadow is animated to use it to make an action.  The Shadow can manipulate the shadows of other people and objects by touching them, and any changes made to their shadows change the object they are connected to. The shadow can also attack, doing 1d6+[dice] damage on a hit to someone's shadow.  However, while this spell is active, the Wizard's shadow is also vulnerable to taking damage from other shadows.  Finally, this spell does not work in pitch darkness. You need light for a shadow to exist.

This spell targets a piece of wood.  When cast, it produces up to [sum] wooden golems (Wizard's choice).  The golems each have HP equal to [sum] divided as the Wizard chooses among them.  All Golems must have at least 1 HP.  The Golems are fearless, obey any order given to them by the Wizard, and are loyal to the Wizard until their death.  They continue to function for [dice] hours or until destroyed.   If four or more dice are invested to catch this spell, the golems do not have a limited lifespan, and will last until destroyed.

Chaos of the Jazz Wizard:
1d6
1- You lose a magic die
2- For 1d10 minutes, you cannot speak.  All sounds that come out of your mouth are just musical sounds
3- You suddenly become massively intoxicated.  Lasts 10 minutes, then you sober up.
4- Your spellbook becomes incomprehensible.  You must transfer your spells into a new one before you can change your loadout of spells.
5- All the liquid on your person turns to 1d4 (1= Water; 2= Gasoline; 3= chlorine gas; 4= water, but its actually poisoned.)
6- For the next 1d10 minutes, everything you do is accompanied by appropriate music.  Sneaking around is accompanied by suspenseful music, fights are accompanied by dramatic music and etc.

Corruption of the Jazz Wizard:
1d6
1- One of your possessions suddenly disappears, and is replaced by the nearest musical instrument.  Miles away, someone is probably very surprised that instead of their guitar/saxophone/fiddle, they now have a magic weapon/spellbook/vital quest item.
2- Everyone within 30' must save or become intoxicated.
3- Everyone within 50' temporarily loses their ability to speak.  Instead of words, musical sounds come out of their mouth. This state of affairs last for 1d10 minutes.
4- Suddenly, all X within 30' catch fire.  This fire is non-magical, and acts as normal fire.  What is X? 1d6 (1= People attacking; 2= People who are lying; 3= bachelors; 4= unwed women; 5= people not of your race; 6= sluts)
5- You are suddenly confronted by a traveling musician.  The musician wants to challenge you to a contest.  And maybe, if you're feeling brave, you can wager over the contest.  Would you like a fiddle of Gold, perhaps?  The musician won't force you to accept a challenge, but expect fortune to turn against you if you do.
6- All liquid within 100' turns to 1d4 (1= liquor; 2= blood; 3= oil; 4= Sweet Georgia Brown barbeque sauce, with the effects of the spell.

Doom of the Jazz Wizard:
Doom of Fools: Your Patron shows up.  It's time to pay up.  You need one person to send with him.  This person need not be willing, but they must be alive, and a three-souled being.  If you cannot find a person quickly (within a minute or two) or don't have one already prepared, then he will take you.  The person who is taken turns to dust and dies.  Before your patron departs, he will have instructions for next time.
Doom of Kings: As above, but this time, your patron left you instructions.  He wants someone special this time.  A virgin, a priest, a child, a famous person, etc.  When he shows up, you either need that person with you, or have permission indicating that they agreed to come with you/your Patron.  If you do that, he will take the person and leave.  That person turns to dust.
The Ultimate Doom: This time, he's not accepting any substitutions.  He shows up, and if he touches you, you turn to dust.

This Doom is avoided by putting on your blue suede shoes and touching down in the land of the delta blues, in the middle of the pouring rain. Alternatively, bet your soul against a devil's golden fiddle and win.  (Thanks for that, Dan). 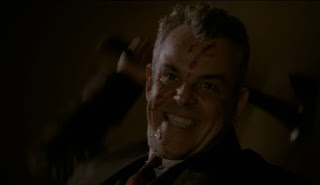