The Fauns of Teakwood Forest

Teakwood Forest is a wild tangle of trees and undergrowth.  Like all Forests, it is full of wild animals, hazards, and other dangers.  But unlike some others, it is also inhabited by a small band of Fauns.  These goat-human hybrids have goat legs and horns, but are otherwise look fairly human.  They are general nuisance to anyone nearby their Forest or anyone foolish enough to enter it.

The Fauns have a habit of messing with local farmers, stealing valuable things, playing pranks, and luring off/kidnapping beautiful girls.  It's also rumored that they have a Faerie princess locked up in a shack in the middle of the forest.  They're troublemakers, but they won't attack large groups- though they might drag someone off in the middle of the night.  Rumors also say there are anywhere from 3 to 5 of them.  In reality, there are seven brothers, and one sister.

Teakwood Forest has a Danger Level of Three.  Every time you roll the Danger Number or lower, that will equal an encounter. Whenever you roll an encounter, roll 1d10 to see who you run into.  The Brothers are generally hospitable, but if you prove yourself to be irritable or dangerous, roll twice and combine them or cancel them. 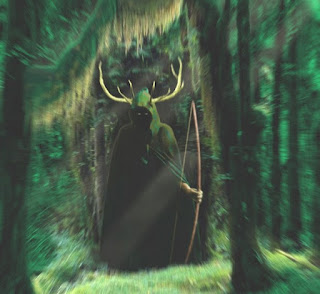 Gat
The oldest of the Brothers.  Six feet tall and his horns add another half a foot to his height.  His horns are like that of a great elk.

Gat is reasonable, disciplined, and absolutely ruthless.  His brothers regard him as a kill-joy, but he's also the strongest one and the one they rely on the most.  He will do whatever it takes to win, except hurting his brothers.  He is willing to bargain, but if he senses weakness, he will look you in the eye while stabbing you in the back.

Gat fights with a longbow, and somehow learned the elven way of archery, so he can fire up to three arrows in a single action.  He can also make other ridiculous shots, like shooting out a pack-animal's eyes, cutting bowstrings with his shot, and other nonsense. 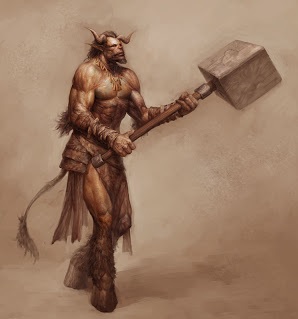 Buck
One of the triplets.  Slightly shorter than Gat, with curly horns.

Buck is a fun-loving, carefree type.  He flirts with anything that has a vagina and a pulse that he comes across, no matter the circumstances.  He is also very loyal to his brother Gat, and thus was trusted to hold the Song of Steel.

Buck fights with a magical warhammer called the Song of Steel.  The Song of Steel has the power of inducing bad vibrations.  If it strikes you, you must save or subtract -1d6 from any roll requiring precision or dexterity.  Additionally, if this reduction causes you to roll a 1 on a 1d20, you damage yourself as per your weapon. 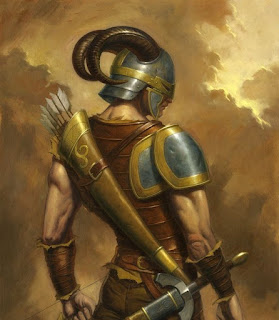 Billy
A hot-blooded young man.  One of the triplets.

Wants to prove himself an honourable and good warrior, and challenges people who enter his wood to duel.  These duels are usually to the first blood, and have a wager associated with them.  For this reason, Billy collects swords and armor.  And despite his relative inexperience, he is a surprisingly good warrior, though a trained swordsman would probably demolish him.
Billy carries 1d6 swords with him at all times, and wears scavenged armor that has an AC equal to 1d6+10.  He prefers to fight one-on-one, in duels.  He will make promises, and he usually keeps them, unless remanded by Gat, who is the only one who will ask Billy to break his vows.  Billy is also the most famous of the brothers, though rumors about him are mixed.  There is a 50% chance the rumors you hear about Billy are wrong, and there is a 2-in-6 chance that he has a sword that is rare, legendary or otherwise noteworthy, though Billy is unlikely to recognize this. 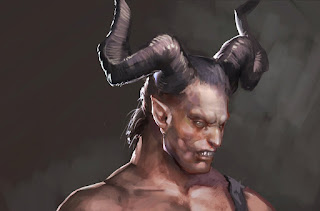 Capo
An ill-tempered goat.  One of the triplets.

Capo is the oldest of the triplets, and so thinks himself the only worthy successor for Gat.  He also secretly hopes that Gat will keel over or get stabbed to death by a group of adventurers, so he can take over.  But Capo is also quite incompetent and has an explosive temper.  He tends to freak out on people who cannot defend themselves, and be overly submissive around people who can.

Capo fights with a brace of daggers.  His favorite tactic is to throw one, then run away if he misses, and/or you aren't badly hurt by it. 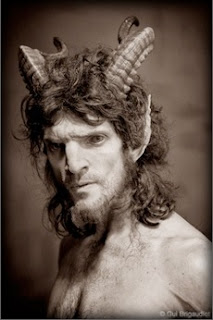 Bovar
A strange, albino faun.  Has red eyes and wears a headband under his horns, one of which is broken off.  The headband actually conceals a third eye in the center of his forehead.  This third eye is blind, but can see into the future.  It only foretells ill omens.  This may be because of his foul nature, or because of his cynical personality.

Bovar is secluded, spiritually minded, and the most articulate of the brothers.  Unlike all the others, he has the education and the time to devote to thinking about things that probably don't matter.  He is also the only literate one.

Bovar is a shaman, and has a pact with the spirit of the woods.  As long as he makes a daily sacrifice of a small animal, he cannot be hurt by any weapon (defined as a tool designed to hurt).  You could kill him with a frying pan, but a sword would ricochet off him as if you tried to stab a boulder.  He can also cast spells, and has 1d6 spells prepared on any given day, and 6 spellcasting dice to work with. 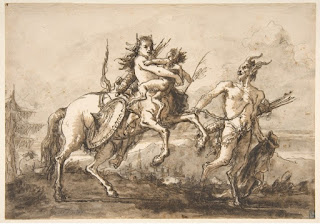 Hirsi
A small, cream and light brown covered faun.  He's only about four feet tall, and rather gangly and awkward.

Hirsi is eager to prove himself a man, but he is still a bit young for that.  He is very adventurous, and an able tree-climber.  How does he do it with horns?  Heck if I now.

So he spends his time following intruders from the tree-tops, dropping bee-hives down into their camps, and shooting them with halluciongenic darts with his blow gun.  He can also play music. 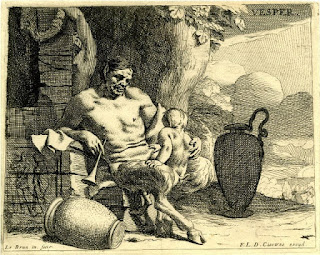 Ibex
The youngest of all the brothers.  He is white as snow, unblemished.  He's three feet tall and little more than a boy.

Ibex has the cruelty of a child, but also its innocence.  He is terrified by strong men, and flees or begs them for mercy.  He finds women curious, as the only one he has ever seen is his sister.  Unlike any of the other brother, Ibex doesn't understand the deception they are trying to pull, and will speak plainly about their sister.

Ibex isn't much a fighter, and has been instructed to run if attacked.  But if another brother is around, he will play music on his pipes.  Like Hirsi, his music can have magical effects if you fail a save. 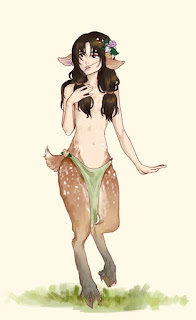 Nana
She lives in their home in the center of their forest.  The brothers will either befriend men and send them to see her, or trick people into thinking she is their captive.  Only Ibex will contradict this, as he doesn't know any better.  The Sister's name is Nana, and she looks like a young, beautiful woman of whatever race a key PC is.  Of course, she is also a Succubus who will peel out the soul of one unlucky fool and dine on it, and leave the body to be eaten by her brothers.

The brothers all want: Women, to have a good time, the safety of their family