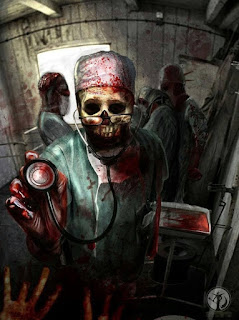 These are people, either proper Wizards, Toxic with Vectors or merely surgeons with a drop of magical talent.  They make art using living flesh.  They combine surgery, magic and other techniques to create unique, one of a kind creations for many purposes, to fight, to attend them, to sell, or merely for the glory of the act, to revel in the creation of something new.

This will be how most Fleshcarvers are seen, as somewhat disturbed artists, working for coin, at the behest of others.  But most Fleshcarvers easily get bored with the mundane requests they receive.  Lobotomizing a girl your client once loved, implanting horns into her and dying her skin permanently red is easy, and barely worth the effort.  As such, most of them spend all their free-time stitching together hideous freaks, the more grotesque the better.  These creations are created firstly for the Fleshcarvers own amusement, but also to prove their skill to others, especially other Fleshcarvers.  Their is fierce competition among their ranks, with rival cliques trying to out-do each other with the most strange, unique or beautiful creature.

There are many schools of thought about the Fleshcarvers, but most of them are too esoteric for any non-initiated to parse out the differences between them.  What is the difference between Artificialists and Suturists, anyway?  So to the ignorant, it can seem like all Fleshcarvers hate each other.  In truth, they do not, but rivalries and feuds are endemic to these passionate artists.

But you're not here to read about the Fleshcarvers.  You're here to see their work.  Well, fear not my friends, for they have outdone themselves today. 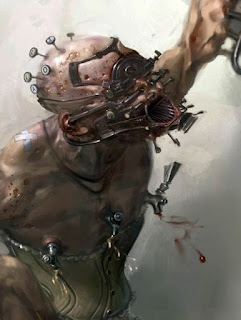 What type of creature is this?

- A Modified Humanoid: Stats as a low-level member of its race, either 1 or 2 HD, usually.  If their modifications were not merely cosmetic however, see Statblock below.

Modified Humanoids are mostly status symbols.  They can be used as attendants and retainers, but mostly they are eye-candy, walking pieces of art to display their owner's wealth.  A few of them are free.  Even fewer of them chose to become this.  The modifications they receive are usually cosmetic, and do not affect the base structure much.  Most of them hate the Fleshcarver who created them, but are also terrified of them.  Modified Humanoids live in fear of their bodies rejecting the transplanted parts, a constant risk that is kept minimal by the Fleshcarver's powers.  The Fleshcarver is the source of their problem, and their succor from it. 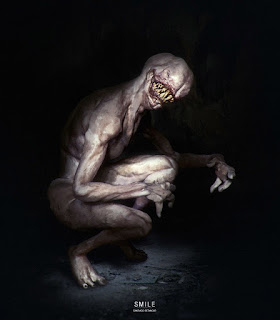 - A Lesser Horror: See statblock below.  This one is strange enough that the original base on which the creature was built is not immediately obvious, but you can usually tell with a little investigation.

These are strange creatures, oddities created with sharp scalpels and razor will.  Some are actively supernatural, others merely odd.  If they are intelligent, they regard their creator with superstitious awe, and would never lift a hand against them.  These creatures are sometimes created merely for the Fleshcarver to exercise their creative talent, but most other times, they have a purpose.  The most common purposes are as a warrior, hunter, or consort. 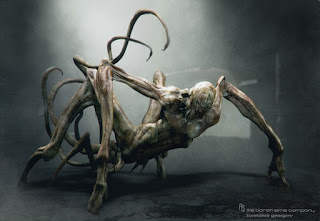 - A Greater Horror: See Statblock below.  It looks alien, eerie.  Perhaps it is beautiful, but more often it is vicious and terrible.

The true sign of status among Fleshcarver is not the number of creations, but the scale of their greatest creation.  A greater horror is a magnum opus, a project infrequently attempted and rarely successful.  Most of the time, it ends with a pile of flayed flesh and useless organs, but other times, it gives birth to strange, alien forms.  Each Greater Horror is different in terms of appearance and temperament.  Most also have some kind of supernatural ability, some form of Magic they can use instinctively.  And as a rule, they are almost always intelligent, usually far more then their creator guesses.  If any creation is likely to rebel, it will be this kind.  Though this is rare, but stereotypes exist for a reason. 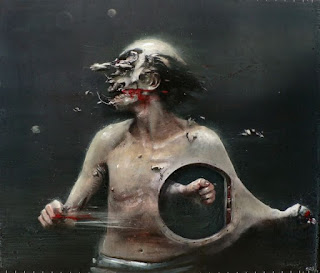 Tactics:
- Swarm the weakest
- Once you have incapacitated someone, drag them away
- Have no coordination with your comrades 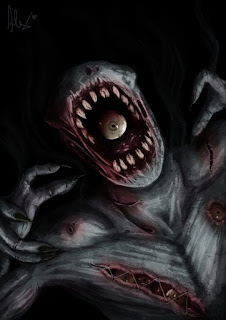 A selection of Lesser Horrors
1d20
1- Handymen: A living wall of hands.  It grapples and strangles while it fondles and tickles.  Like crowdsurfing but lethal.
2- Stiff Upper Lip: The lips cover half the face, the tongue is barbed.  It paralyzes you with poison kisses.
3- Iron Lung: Like a refridgerator with skin and limbs.  A semi-organic cyborg thing that stuffs you inside it
4- Glass Jaw: Most of its skull has been replaced with transparent glass.  Can shoot teeth out of its mouth like bullets.
5- Ankle Biter(s): A pack of childlike monsters with cruel jaws and missing eyes.
Heart on your sleeve
6- Simon Longtooth: A wolfish man with yellow eyes and terrible, artificial fangs.  Can steal the calcium from someone's bones, making them soft and rubbery.
7- Thorn Manson: A great mass of quills and hooks that punches, then slowly pulls back.  A sadist who enjoys torturing people.
8- Gregory Peck: A seemingly normal man that can stretch out his neck to bite someone.
9- Lacy Garter: A woman who can detach her skin and unwind herself into various lacy cloths.
10- Midas: Has organs made of precious metals and a heart of gold.  Constantly in pain, and paranoid about murderers.  Sets off metal detectors.
11- Smiler: He's very happy to see you.
12- Nova Achilles: A nigh-indestructible man with armor sutured into his skin.
13- Bigger than his Stomach: They say the first bite is with the eyes.  For him, it's the first, the second and the third.
14- Sea Legs: A grey-skinned man with bulging eyes and nimble hands and feet.  His touch unbalances you, making running impossible without falling onto your face.
15- Homestyle: A corn-fed dame, crisscrossed with surgical scars, her face hacked open then stuck back together in a way more pleasing to her current master.  She sprays pheromones.  All who smell them must resist the urge to swoop in and rescue her. Men are especially vulnerable to her charms.
16- Kidney Thief: An insectlike humanoid with paralyzing stingers and claws that it uses to hack people open and steal their organs.
17- Skinfang: A massive, skinless freak with an extended muzzle.  Has thousands of razor shapr, needle teeth that pierce, injecting venom that soothes and comforts as it kills.
18- Artificial Angel: A woman made into an Angel.  Has wings made of meat and a halo made of glass set above her head.
19- Hatchman: There is a translucent hatch built into his oversized chest.  Opening it releases a high-pressure flood of water.
20- Gore Eyes: Can pop out your eyes without killing you.  This gives you a penalty to see or do anything requiring precision. 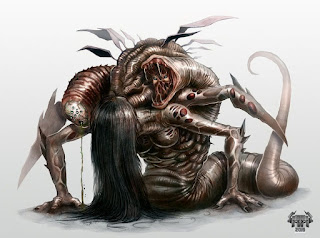 A Grand Exhibition of my finest work
1d6
1- Mother Murder Master: Three heads, each with one united agenda.  She seeks to nuture.  He seeks to kill.  It seeks to give birth.  It slaughtered the first person sent in to greet her.  Then she cuddled his body for two days, dribbling breast milk over his shattered form.  The next day, at midnight, one of security guards swears he saw the corpse move.  But by the time I arrived, the corpse was already gone, with no trace it had been ever there.
2- Meat Mannequin: A mockery of life, and of time.  This thing, it should not be alive.  It died on my operating table.  My mistake, I was clumsy.  Yet here it is, stubbornly hanging on.  I'm tempted to shoot it, finally put it out of its misery.  My only fear is what might happen after that.
3- He who Seeks: A beautiful creation.  Every inch of its body seems to be full of new and interesting ways to kill people.  Stingers, claws, pincers, and look, it even has little hands.  It could choke you, if it wanted to.  It's also quite obedient, as well.  Just don't look it in the eyes, it doesn't tolerate disrespect.
4- Clad in Spidersilk: Is it actual spidersilk?  God, I wish that were true.  No, but it is some kind of organic compound that is stupidly strong.  The thing produces it near constantly, and covers everything with it.  It also takes off its covering when we come in to bathe it, then puts them back on later.  Interestingly, it refuses to do so if there are male attendants washing it.  Why?  I have no clue, maybe it's modest?
5- Crow-Man: I know he's a bit smaller, but this guy, he can do things most creations can't dream of.  No, he doesn't talk, have you seen his beak?  But he's really smart, try playing chess with him.  Just don't expect to win.  Oh, and if you hear any strange noises at night, don't bother investigating.  Just stay in your room, with the doors locked.
6- Child of Mourning: This one seems to sad all the time.  It's quite depressing, in truth.  That's why we leave it so lightly guarded, firstly because its never once tried to escape, but also because my guards keep trying to enter its enclosure to try and cheer it up.  I know, it's strange.  Anyway, it'll go up for bidding tom-, hey!  I thought I told you, don't look into its eyes.

Tactics:
- Operate according to your own strange, twisted logic
- Be much smarter then anyone else around you
- Set traps and fight from the shadows, don't stand up to a well armed mob
- Live to fight another day 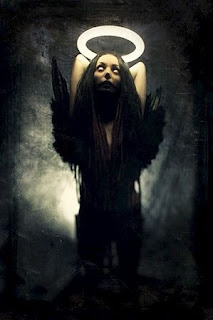