OSR: Psychomancers: Lords of the Mind 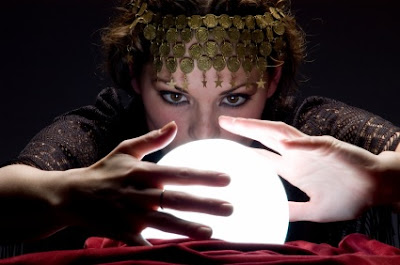 Psychomancers are mind-readers, thought-weavers and manipulators.  These Wizards are among the second rarest type, and possess the fewest combat spells, with perhaps the exceptions of the Cthonomancers.  Playing a Psychomancer is much more suited for a game based around role-playing and interaction rather than straight dungeoneering, but even in such a limited situation, a clever player and a DM willing to try something new can ruin an enemies' day for far longer than a fireball could.

Psychomancers pick their starting spells from the following 1d12 table.  Spells 13, 14 and 15 are rare and as valuable as a magic sword.

Power: Can cast spells without speaking or moving your hands, as long as they are Psychomancer spells.

Drawback: Can constantly hear the "loudest" thoughts of people within 100', "loudest" here being defined by the thought most prominent in their mind.  For example, if your friend's feet hurt, his "loudest" thought might be "Gee, my feet hurt."  This makes concentrating on anything difficult at best.

One creature that is under attack finds itself in possession of superhuman reflexes, speed and skill in combat.  They may make one extra attack for every foe against them.  They add +[dice] to all the damage rolled.  Afterwards, the creature must save vs exhaustion.

One person disregards the spell you just cast on them and treats you like a good friend.  If you invest four or more dice into the spell, it has a permanent duration.

The Wizard who casts this can detect the attention other minds are giving it.
If four dice are invested, then the Wizard can identify which attention is coming from who.

Target becomes irresistibly cool for [dice] hours.  Add +[sum] to any interaction checks.  Additionally, as long as they can offer a rational explanation for their actions, they will still be regarded as distinguished or intimidating.  If someone under the effects of this spell tries to intimidate someone, they change from a 'super charming' to 'oh god get it away'.

The Wizard can ride along in a creature's mind, to see through their eyes.  While the Wizard is doing this, he cannot see out his own eyes.  You can target an unwilling creature, but the creature gets a save to resist.  If you invest four or more [dice], you can choose whether or not to blind the creature whose vision you are sharing.

Hypnotize one intelligent creature that can see you.  That creature must make a save  or fall under your influence.  This person is hypnotized, and will take suggestions from you.  They will not do anything that their own moral code would disagree with.

The target of this spell must save or get -[sum] to any check made to interact.  If they pass their save, other people must save or get +[dice] to resist their charms, as well as a vague feeling of distaste toward that person, but not one they can actively identify.

One creature you touch has his memories rewritten.  Unwilling creatures get a save.  Creatures with more HD than [dice] may add the difference to their saves.  Creatures with 3x or more HD automatically pass.  Creatures that fail their save fall into a trance and the psychomancer may alter his memories by making [dice] changes, causing the creature to forget certain pieces of information, remember  events happening differently or something else entirely.

The Psychomancer can add new memories to a creature's mind, but memories that are incoherent or don't align with the creature's other memories will be rejected as false.  For example, giving a creature the false memory that it liked to immerse itself in acid would be rejected as something from a dream.  Additionally, unless then changes are drastic, creatures having their memories altered does not affect their personality or emotions that much.

An example of how this spell works:  The Psychomancer casts this on the Captain of the Guards while he sleeps with 3 [dice].  The Captain fails his save and now the Psychomancer can make changes equal to [dice], so 3.  So the Psychomancer erases the Captain's memory of his walk home then adds the memories of waking up next to the Fighter and then her sneaking off in the middle of the night.

Then, once the Captain wakes, he will believe that he and the Fighter slept together.

Allows the Wizard to see invisible creatures for [dice] minutes.

[dice] creatures get +4 to their saves against fear, or being moved against their will.

Target creature must save or be paralyzed.  While paralyzed, a creature cannot move or take actions.  If the creature is in combat or an otherwise stress situation, they make a save each time it is his turn to attempt to break free.

You establish a telepathic link with [dice] creatures.  They can communicate with you using telepathy for [dice] minutes.

You reshape a creature's mind to make it love and worship you.  This process is best done on someone who has a positive emotional connection to you.  They must save vs magic and you must check vs your Charisma (add your level in Wizard to the roll).  If they fail, they fall under your influence and make you the center of their world. They will remember what you did to them, but they will love you regardless.  They will regard you as God made flesh and do whatever is necessary to please you.

If you fail, they will not.  If they pass their save but you also do, you can either allow the spell to fail or smash their mind and enslave them anyway.  This will transform someone into a shrieking berserker, ever loyal to you but useless at anything that a wild dog couldn't do.  If someone consents for this to be cast over them, that automatically counts as them failing their spell.

You can plant one idea [dice] words long into one creature's mind.  That creature must make a save to see if they accept the idea.  If they fail it, they accept it as their own.  The creature gets +4 to save if they are doing something right now that contradicts the idea, -4 if they are unaware of you, and -10 if they are sleeping.

On a failed save, the creature falls under your control for the duration.  It will obey any order except obviously suicidal ones, and you can use an action to take direct control of the creature and control its movements, though this will require you to stand still.

Dominated creatures retain their mental ability scores, personalities, and desires.  However, their love for the caster is so great it obliterates all other concerns, except for basic self-preservation. 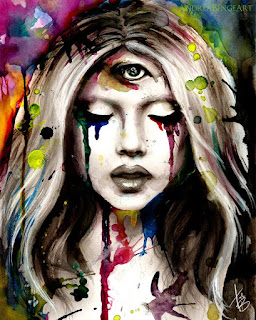 The tables can be found.

Doom of Fools:  You gain an insanity.
Doom of Kings:  Your insanity becomes contagious.  Anyone affected by your magic or who links their mind with yours must save or have your insanity infect their mind.
Ultimate Doom:  Your body becomes the vessel for twisted alien intelligence, and your soul is shunted out into the cold void between the stars.

This Doom is avoided by confessing your sins at the True Cross, or by cursing yourself to never be able to lie.
By Yami Bakura at January 01, 2018