Ideas stolen from here,  and here.

So, the Muscle Wizard.  I've always liked the idea, but outside of the memes, I've never seen a good version of the class.  So I'm going to do it right now.  So, Muscle Wizards.

Muscle Wizards are just a sub-type of Wizard, but their are important differences.  While all Wizards are based on ignorance, Muscle Wizards take this to an extreme.  Firstly, they call themselves Muscular Punchers, and don't consider themselves Wizards.  Opinions on whether they are or not vary.  Secondly, while Wizards train either with lone masters, Wizard colleges or Wizard Monasteries, Muscle Wizards learn from either lone masters or in secret gymnasiums, where they learn forbidden exercises that no man was meant to know.  They store their "spells" in exercise manuals, then transfer them to their muscles when they need to use them.  If a Wizard dies and you cut open their skull, you will find their brain is horribly mangled, with lots of dead areas, scar tissue, and jellied arroyos (Arnold K's words, not mine).  But when you perform an autopsy on a Muscular Puncher, you will find that their brain is fine, but their body has been mangled by being used as a conduit for eldritch power.

However, their is a catch.  Like all classes in my system, Muscle Wizards start with 1/3 of their Constitution Score at start.  This progresses as normal, with 1/2 at level 2, and their full Con score as HP at level three.  However, after that, they gain no more HP.  But while a more martial class, which would continue to gain Fighting Spirit, however as they are Wizards, they do not,meaning that without multiclassing a Muscle Wizard's max HP is 18.  So the class might still be too fragile for someone who is supposed to solve all their problems by punching them to death.  So to compensate, I gave them a lot of spells that can buff them or their allies.  But if you're the Muscle Wizard and you're buffing someone else, what are you doing?

But other than that, Muscle Wizards are still Wizards.  They go mad, suffer DOOM, and get involved in all the other ridiculous bullshit that Wizards do.

So here we go; ladies and gentleman, I give you, the Muscle Wizard! 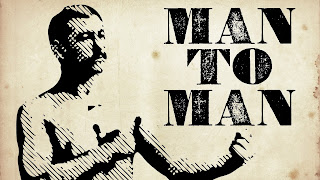 Muscle Wizards, or Muscular Punchers, as they prefer to be called.  To discover what your Muscle Wizards starting spells are, roll 1d12.  Spells 13,14 and 15 are as valuable as a magic sword, and are rare enough that very few, if anyone will have access to them.  The Legendary Spell of the Tradition hasn't been seen in millennia, and the Muscle Wizard who finds it first will likely be remembered forever, deified as the Patron Saint of Badass.  Additionally, Muscle Wizards have the following Power and Drawback innately.

Power: You can use your Fists as a weapon, dealing 1d6+STR damage on a hit.  But if you miss, and you were trying to strike an opponent with unusually tough hide, spikes, quills or metal armor, you must save or take 1 damage from hurting your fist.

Drawback: You cannot read or write.  You cannot learn how to.  Reading is for nerds.  Thus, unlike all other Wizards, your spell book is an exercise manual with many drawings, demonstrating the proper poses and physical rituals needed to draw the spells from the enchanted pages into your rippling muscles.

Target creature must save or be charmed by you.  That creature gets -[damage] to their save, where [damage] is all the damage you have inflicted to their HP.  This only applies to damage inflicted within the last [dice] hours, or some sort of permanent scar that never healed.

When the Wizard casts this, up to [dice] allied creatures may immediately make an attack against one creature the Wizard designates.

If a creature spends an action calling out the name of their attack, or describing what they are going to do to their opponent, then their next attack gets +[dice] to hit and does +[dice] damage.

This spell lets you blast small darts of wind at sources of light.  These sources of light must save or be extinguished.  If the source of light is not powered by fire, it is still extinguished on a failed save, but only for [dice] rounds.  Normal fires must be relit, but they cannot be relit until after the spell has ended.  If you use four or more dice to cast this spell, you can cause an eclipse within [dice] miles of the original casting.

Targets take -[sum] less falling damage.  If they smash into someone when they land on the ground, then that person takes their fall damage instead.

A creature who has this spell cast over them has the choice of letting any attacks directed at them automatically hit, for the duration of the spell.  If they do so, the attacker must save, or break their weapon.  If they are not using a weapon that could concievably break, then they take 1/2[sum] damage.

The next attack you make, if it hits, does +[sum] damage.

Everyone within range must save.  On a failed save, those that failed their saves will set aside their weapons and settle things with a bare knuckle boxing match.  Their opinions on all other things will remain unchanged, and depending on how much they disliked you, this could be a civilized match or a white knuckle brawl.  If someone passes their save, but their allies don't, their allies will try and encourage them to discard their weapons, as it would be unsportsmanlike.  However, if you obviously cheat or start attacking them, the spell ends.

Target creature gains [sum] FS, even if that is above their normal maximum FS.  This lasts until the FS is all expended, or until [dice] rounds have passed.

Accelerates your movement speed by [dice].  If you are in combat, add +[dice] to your initiative and AC against melee attacks.  If you are not, anyone who wishes to catch you or go faster than you (assuming you don't want to be caught) must save-[dice] to do so.  Otherwise, you leave them in the dust.  If you use 2 dice to cast this spell, you are the fastest man in almost any room.  If you use 3 dice, you can outrun a horse.  If you use 4 or more dice, you can dodge projectile attacks if they are not made from surprise. 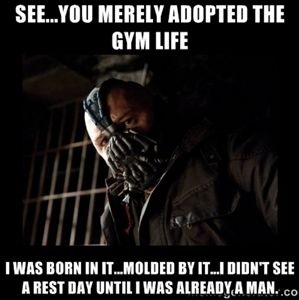 For the duration, all successful attacks against a spellcaster do +X damage, where X is the number of spells they have prepared.

You can cast this spell as a reaction to suffering any fire based attack.  Subtract [sum] from the damage you would take from the fire damage, and then make your next attack against the source of the fire at +4 attack bonus, as their was no way anyone could survive that.

For the duration, all attacks against you do -[dice] damage. 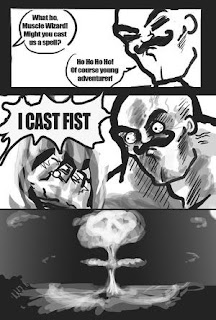 
Chaos of the Muscle Wizard:
1d6
1- You lose a spellcasting die.  It comes back after your next long rest.
2- You must randomly attack the nearest person.
3- Your arm dislocates.  Until you take a full action and a successful STR check to pop it back in, you cannot use it.
4- All the bones in one your limbs turn to cartilage for 1d10 minutes.  Save once the duration is done.  On a success, your bones return to normal.  On a failure, they do not.
5- Your Power is suddenly suppressed for 1d10 minutes.  Your punches are now normal, and only do 1 damage on a hit
6- For the next 1d10 minutes, you cannot use any normal weapons, including your fists.  You can still fight with things that aren't weapons, though.


Corruption of the Muscle Wizard:
1d6
1- All your bones turn to cartilage for 1d10 minutes.  Save once the duration is done.  On a success, your bones return to normal.  On a failure, they do not.
2- You must save or develop a mutation.  Anyone you touch for 1d10 minutes also must save or develop a mutation.
3- You randomly cast one of your spells.  If the spell needs a target, it targets the nearest person.
4- The next thing you touch with your arm, your arm becomes attached to it.  Pulling the object off does 1d6 damage to you.  After 1d10 minutes, save.  On a success, the object is no longer attached.  On a failure, it stays stuck to it permanently.
5- In The next room you enter, all the lights go out and the room is plunged into darkness.
6- The next person you attack, instead of taking damage, instead takes no damage.  A red ball shoots out of their body.  This ball contains all the damage your attack would have done.  The ball then begins bouncing around at a velocity equal to the force you hit the target with.  The first person to touch it takes the damage.  The ball will bounce off walls and ceilings, so hopefully you were outdoors when you cast it.  If not, save vs bouncing ball.

Dooms:
Doom of Fools: You make an attack against the person nearest to you.  This attack is so powerful it whips up the air and causes a massive pressure wave, doing 2d6 damage to everyone within 30', save for half.  You are also not exempted from this damage, and you take damage as well from the punch.  This is not because of the shockwave, but because the force of your attack cannot be contained by your frail, mortal body.

This Doom is avoided by becoming the Strongest Wizard in the World, or by winning a boxing match against the current heavyweight champion of the world.  If you're in Eldritch Americana when this needs to happen, the current champion is William Harrison "Jack" Dempsey.