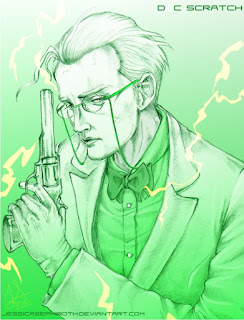 I'm thinking about making some changes to Eldritch Americana.  To make it more eldritch and hopeless, I'm going to assign every character a destiny at the start.  This is something a player has no choice in, because neither did the characters.  And while this fate will most likely describe what will happen to the character, the thing you'll learn about fate is that it is far less unbreakable than people claim it is.  A character can learn their Fate by consulting a Wizard who knows the right spell or a priest of the New Gods.

Fate comes from the Author of Fate, Yosganeth.  It is either personally composed by him, or he delegates it to his Ghost-Writers.  But because of the free will of Humanity, a right that their creator gave them that the New Gods have found impossible to remove, Fate is not perfect yet.  One day, it will be completely unbreakable, but as of now, it is flawed.  The shackles of fate can be broken, or at least twisted into less favorable positions.  But as the fabric of destiny is already quite frayed, and too much strain on it will cause it to break, and free scores of people, and weaken Fate's hold on many, many others.  This is a problem that must be corrected.  The Angel of Fate is the device used to correct it. 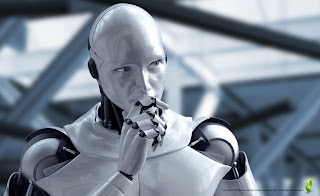 Angels of Fate are beautiful, sanguine creatures.  They are clearly artificial beings, their regal features carved of glass and porcelain, their bodies made of the finest metals, gilded and carefully wrapped around their delicate clockwork interiors.  They are androgynous, and vaguely resemble humans in their features, with the exception of their compound eyes and segmented bodies.  They are always dressed impeccably in elaborate headdresses, long flowing silk robes, and are almost always laden with jewelry.  They almost exclusively fight with rapiers.  And while their swords are not magical, they are of the finest quality metal, each one a work of art.

And while they are beautiful to look upon, they are terrible company.  Angels of Fate can see the future in a limited way, though you wouldn't know this from talking to them.  They are massively condescending and consider you a blind, dumb idiot who needs to be put down for his own good.  They are insufferably smug as well, constantly looking like they have all the answers.  And while Angels of Fate can see the future and tell you your fate, they do not possess the limitless vision they claim.  And they will claim to have perfect knowledge of the future, but they are lying through their teeth.  The Angels of Fate can only see a small section of the immediate future, so while terribly threatening for a short while, they are also quite shortsighted (literally and metaphorically).  They are also massively arrogant and tend toward overconfidence.

God's Plan: At the start of any combat, have the Angel of Fate roll 4d20s+1 per opponent.  Then the Angel of Fate may arrange these numbers in any order it chooses.  Instead of rolling a d20, it should instead just cross off the next number in line.  When the Angel runs out of Numbers, it must instead roll as normal.

Unfortunate Incident: The Angel of Fate has carefully researched all the people who are supposed to be in the area when it arrives.  If a player ever rolls a 1d20 and comes up with a number that is one of the numbers on the Angel's list of d20s, the Angel can, as a free action, sacrifice the number on their list to cause an Unfortunate Incident.  This is a freak accident, such as a car smashing through the wall, or a rain of poisonous frogs occurring.  Unfortunate Incidents cause 1d20 damage, save for half.

Tactics:
- Finish quickly
- Only use Unfortunate Incident if you are fighting a large number of opponents
- Focus on those with the highest attack/damage bonus first 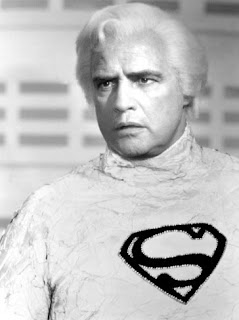