You will never be a Wizard.  If you were a Wizard, you'd know when your first crush developed leprosy a week after she broke up with you, or your toys came to life, or your imaginary friend turned out to be very real, as the kid who tried to steal your lunch-money could tell you.

Additionally, you will probably never develop a Semblance, the poor man's magic.  A Semblance can only be gained by enduring a particular trial of strength, or developed naturally if you're a rare breed of genius.

But that does not mean you have to go without magic entirely.  For while a normal human will never be able to conjure the flames of the netherworld or cast their mind's eye into the distant reaches of the material plane, natural talent is not the only way of obtaining magic.  If you know where to look, you will find that magic is disturbingly common, and with the right materials and mindset, even a common plebeian can do something impressive with magic. 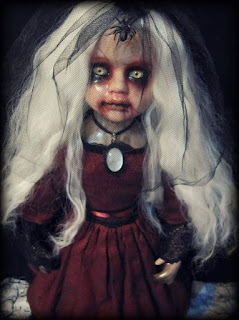 This is an easy one, and doesn't require a lot of explanation.  Voodoo dolls are based on the principle of sympathetic magic, the art of making connections between two similar objects.  First, you need to get a doll of some sort.  Then you need to establish the connection between the person and the doll.  The easiest way to do this is through stealing a piece of hair and tying it to the doll, but you can use other body parts as well.

Another way, though one less successful, is getting someone to write their full name on a piece of paper and sticking it inside the doll.

Then you need to cement the link.  The method for doing this varies, so I won't bother detailing them all.  But once you're done, the Voodoo Doll and the person should be linked.  A good way to test this is to stroke the Doll with a feather.  If the person starts giggling like a fool, then you have succeeded.

Now, why would you bother creating a Voodoo Doll?  Well, there are many uses.  For instance, anything done to the Doll will affect the person it represents.  And while this has many malicious uses, it can also provide beneficial ones.  For instance, if you whisper something into a Voodoo Doll's ears, the person it is linked to will hear it, no matter how far away they are.  If someone is injured, and you fix the injury on the Voodoo Doll, their wound will be healed as well.  I could go on, but you're a smart cookie.  I'm certain you'll think of something I never could.

Finally, a Voodoo Dolls are usually sculpted in the likeness of their owner, but the best of them not only resemble them, but capture the essence of the owner.  A disturbing doll tends to lead to a disturbing person. 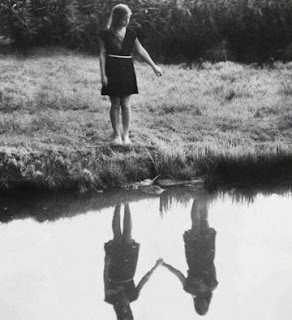 A Tulpa is a parallel consciousness, a piece of ancient, rare magic that has somehow persisted to the modern day.  But like all ancient relics, it is either ignored or in the case of Tulpamancy, hilariously misused.  For example, most Tulpas are created by people who are desperately lonely, just to have someone to talk to.  In other cases, Tulpas are created for "personal use".

Tulpas are like ghosts.  Most people can't see them, but they are real.  You can spawn one through a magical process, though even someone with only the most meagre scrap if talent can create one.  For most people, a Tulpa they create us like an imaginary friend, but they act independently of the person who originally called them into being.

A Tulpa is like a ghost, but spawned from a living soul.  The weakest ones are like sentient hallucinations.  They can speak and appear to you, but they barely exist.  Slightly stronger ones can touch and affect objects that have immaterial presence, such as Humans.  These Tulpas can harm you, they can slap or punch you.  But while they feel real, when all is said and done, your physical body has not been actually harmed.

The rarest type of Tulpa, the one spawned by someone with some magical talent, have a physical presence and can affect the material world.  These Tulpas can actually hurt your body, and not just bruise your ego.

If the person who originally created the Tulpa dies, the Tulpa dies as well.  Their are persistent rumors in some circles of stories of Tulpas that killed their owners because their existence was complete agony, or stories of how Tulpas stole their creator's bodies and took over their lives, sometimes with their Creator still alive, but trapped and unable to do anything.  Finally, darkest of all, their are tales of Tulpas that killed their Creators, and somehow managed to live on, despite their tenuous connection to reality.

I have found no truth to any of these stories, or have been unable to locate the original source of most of them.  However, after all my research, I had no desire to learn anymore. 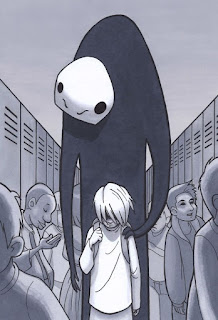 And for reference, this is what Fighting a Tulpa looks like to someone who is not in the Know.  And even if you do Know, they can still be hard to see, as they are less real than you or I. 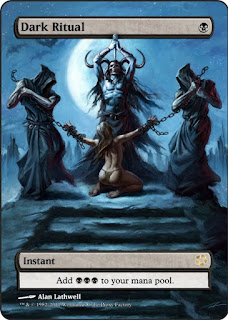 A Ritual is like a spell, but it isn't.  Namely, Rituals can accomplish the type of Magick that it usually takes a full fledged Wizard to do, but with no Magus necessary.  This is because they draw their power from some other source.

Now, when using a Ritual, it is very important to follow the instructions.  Do not mess any of the steps up.  If you have an incomplete Ritual or you're missing a step, do not use it.  If you are doing a Ritual and you realize you messed up a step or forgot something, do not continue.  And remember to read the instructions.  For when you use a Ritual, you are tapping into a power far older and far more powerful than you.  So do not mess around with it, or you will regret your decision for the rest of your life.  Though if its the wrong ritual, then that won't be for very long.

And while I wouldn't ordinarily do this, I like you guys, so I'll write down a Ritual or two here.  But let me warn you now, do not abuse or misuse them.  It might just be the last mistake you make.

Ward Building
Description: Ensure a building cannot be entered by spirits, ghosts, or incorporeal entities.
Steps:
1) Find a piece of string, yarn, or thread.
2) String it across the entrances of all non-essential doors.  Make paper signs that say "No admittance" and hang them on the string.
3) Do not use these doors.
4) If there are any windows, make a line of salt across each window sill.
5) Set a Guard on each of the doors leading to the outside that you do use.  When people enter, have the guard ask their names.  Once they have been received, have the Guard loudly announce that they are to be welcomed inside.  All others, are of course, barred from entering unless they are invited.
6) If you have any fireplaces, keep the fires within constantly burning.  If you cannot afford this, string yarn across the fireplaces, close the flues, and hang paper signs from the yarn, saying "No admittance."

If it worked, you will receive no unwanted magical visitors.  But be sure to check your wards.  If a paper sign is burned, a string snapped, or an area of salt discoloured, sweep it away and repair it.  That means that something has breached your Wards.

Ways it can go wrong:
- If you do not maintain the wards, they will swiftly be reduced to so much window dressing
- Something must succeed a Saving throw to break through your Wards.  But it must also make a Saving throw to leave, if the hole it made when it broke through has been repaired.  So the haunting might be coming from inside this house.

Consult the Three Kings
Description: A way to divine esoteric knowledge.
Steps:
1) Locate a room with steps leading up to an upper floor, and one door to enter that floor.
2) Place four chairs in this room.  This is the sitting room.
#) Find another room on the same floor with one entrance and set up four chairs in it.  This is the Question room.
3) Wait until the Witching Hour.  (3-4 am).
4) Sit upon the chair you have selected for yourself.
5) Summon The Three Kings.  Say, "Nuhzrain, King of Night, come to me.  Salpon, Prince of Eve, come to me.  Articon, Lord of Morning, come to me."
6) Call them one by one into the Question room.  You can only call one King at a time from one room to the other.
&) Be careful, as some of the Kings will be violent if you leave them alone with the others.
7) Dismiss them.  Dismissing one King sends them all away.
8) Go up the stairs
9) Do not enter the room until sunrise.

Additionally, if they are with their opposite, they will try and attack them.  Nuhzrain hates Salpon, and will try to kill him if the two of them are in the same place.  Similarly, Salpon will attack Articon if left alone.  Articon is a peaceful sort, and would never hurt anyone.

Let these bits of esoteric knowledge ease your passage and help you along the way.  And if you ever feel scared, or that you've bitten off more than you can chew, just keep calm and remember: Babylon Prevails.

Email ThisBlogThis!Share to TwitterShare to FacebookShare to Pinterest
Labels: Adventuring in a modern occult setting, Gary vs Monsters