A while ago, I made a post on differentiating the various types of Caster.  This was an exercise in theory, but also an attempt to integrate the 'Magic Words' into my system without disregarding all my lovely spell-lists.   But in the end, I decided not to actually use it, as it was not as good as I liked.  But now I'm doing it again, only this time, I think I've got it right.


((Skip ahead if you live and breathe this stuff.))

In the GLOG or FLAILSNAILS casting system, magical power is determined by a series of magic dice or spell-casting dice.  In this system magic dice burn out on a five or six, and come back after an eight hour rest.  Additionally, when casting a spell you can choose to allot more or less dice to it, depending on what level of spell you want to cast.  The thresholds for a successful spell vary depending on the level as seen here:

Additionally, if you roll under the minimum threshold, nothing happens.  The spell isn't cast, Chaos or Corruption doesn't happen, and no dice are lost.

Finally, when one rolls doubles or triples on spellcasting dice, they suffer.  This is what the Chaos and Corruption posts were based on.  And while I will be keeping this system for Eldritch Americana, as in that, the Wizards gain their power from the evil Gods- in my other settings I want magic to be wild and untamed, inexplicable, not something inherently destructive.

So what is the difference? 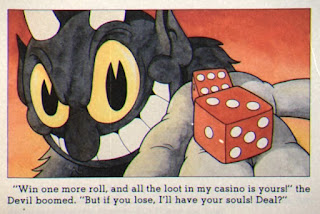 Warlocks sell their soul for power- or they make some other type of agreement with a spiritual entity.  It need not be a master-slave relationship, and your soul need not be sold, but what kind of pussy are you if you want trade your immortal soul for earthly power.  So I'm going to assume if you're a Warlock, you sold your soul unless you specifically mention otherwise.

Warlocks do not suffer magical mishaps, nor do they need to bother with spell-slots.  A Warlock's relationship to magic is like owning a dog.  Whether the warlock is the dog or the human in this metaphor varies from Warlock to Warlock. 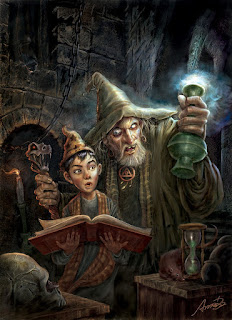 Wizards learned how to do magic.  They went to Wizard College or learned from a Master Wizard.  However, Wizards learned how to cast in a specific way.  They get drawbacks because of the dogmas they were taught.  Think of it being taught by someone who didn't have a full understanding of what they were telling you, you have all their bad habits and/or the strange traditions of your order floating around in your head.  This limits you, but it also protects you from the excesses of wild magic.

So Wizards do not suffer Chaos (low-level magical shenanigans from rolling doubles) if they are casting a spell from their tradition/starting Wizard Spell List.  But if they are casting a spell that they stole from someone else or found on the wall of a cave or bought in a specialty store, then it can trigger Chaos as normal.  Additionally, Wizards still get Corruption from all spells, even ones from their Starting List.  Wizards know all this at the start.

However, instead of rolling on the Corruption Table, this just triggers a Doom.  The first time they roll Corruption, this triggers the Doom of Fools, the second time the Doom of Kings, and finally the Ultimate Doom the third Time they roll triples.  Wizards know about Dooms and about how the more powerful a spell is, the more likely it is to go terribly wrong, but not when and how their Dooms are triggered.

Now the potential implications of this are quite expansive- and I'll only touch on them here.  But what does this mean is that unlike the eight types of Wizard in Eldritch Americana, there are actually thousands of types of Wizards.  Arnold K wrote about something like this here, he called them Regional Classes.  And while I'm not quite ready to do that entirely, I will be doing this for Wizards.  And keeping in mind Joseph Manola wrote here, that means that each region will probably have its own unique type of Wizard.  What is illegal in one country/nation may be illegal in others, and what is common in one might provoke stares in the other.  That means that not only can you have Wizards like this and this, but also like this, and this or this or this or all of them.  Just make sure that every nation doesn't have all types of Wizards.  All Wizards are tied to institutions and places, and their spread is usually tied to how far that institution has spread.  That means if your Wizard works for the Church, he is likely to find similar Wizards to him wherever the Church is.  But if he goes into pagan lands, who knows what kind of Wizards he might meet?  Similarly, if your Wizard is a unique variety that lives only on a small atoll out in the ocean, they might never encounter another Wizard exactly like them, unless they are literally walking around their hometown.

And to continue the example from earlier, a Wizard's relationship to magic is like joining a hunting party and going into the woods.  As long as you stay with the group and listen to the guide, you will most likely be safe, and might even get to shoot something.  But if you go off on your own or are just really, really unlucky, you still might be attacked by a wolf. 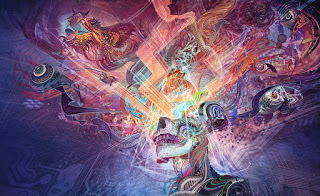 Sorcerers are people with inborn magical talent, that was either latent or expressed.  But for whatever reason, they never got magical training.  Perhaps they didn't know they had any talent until they got kicked in the head by a mule, then woke up three days later with their third eye permanently welded open.  Or maybe their family couldn't afford Wizard college, or distrusted Wizards as vile sinners, or they were a girl, etc.

Regardless, it didn't happen.  You forgot about your talent or suppressed it, and hoped it would go away.  And for a while, it did.  But then, one day, it suddenly returned, a million times stronger then before.  Where before you had a cup of magic, now that cup had overflowed, and you were swimming in power.

A Sorcerer starts with a number of spells equal to the modifier of their casting attribute (CHA for me) from any compatible spell list.  If the player doesn't have any in mind, determine one randomly.

Additionally, Sorcerers have a secondary ability.  Sorcerers can remix spells, by breaking them apart into the Magic Words that compose them and recombining them.  This is not something that can be done on the fly, but takes at least 1 day of uninterrupted work, where the Sorcerer is not doing anything else.

As for Mishaps, Sorcerers are powerful, but they are in many ways more vulnerable to the astral winds of magic.  They are constantly suffering low-level magical effects.  Whenever a Sorcerer rolls doubles or triples, they suffer Chaos.  You can roll on any magical side effect table you choose, or you can use mine [Not published yet].

A Sorcerer's relationsip to magic is going into the woods all by yourself with five bullets and a gun, to try and bag some game.  Sure you might get lucky and get a whopper of a buck, but you might also get stuck up a tree with 30 coyotes sitting at the base, waiting for you to come down. 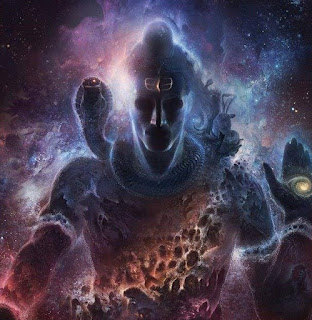