Their are many political compasses out there, all professing to explain the whole metric of beliefs.  But I feel that when you boil things down to their basest forms, the struggle between right and left has nothing to do with socialism vs capitalism, bigger government vs smaller government, or anything else divides these two sides.  The two sides are actually those who want to fight the forces of history, and those who work in favor of these forces, even working to accelerate them.

Now these forces of history are rooted in the cyclical theory of history, which I happen to believe.  Essentially, it works like this: 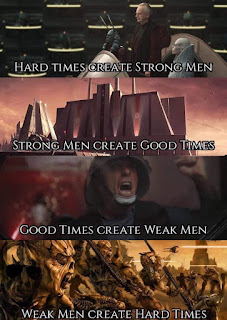 Societies rise and fall like the tides, falling a natural pattern of growth, stability, overreach and arrogance, before the whole edifice collapses under its own weight, or is opportunistically destroyed by a younger society.  And since I am the one designing this world, the cyclical theory of history is what applies to my worlds, including Eldritch Americana.

But if that is true, then we must look at the theory again.  Societies rise to prominence by building themselves upon a series of laws and traditions.  By following these laws, they are able to achieve great results, and enter a period of stability and safety.  But then, as they grow indulgent, they drift further and further from the laws and traditions that brought them to that point.  And while more reasonable voices can prevent this decay at first, as time goes on, these reasonable voices grow less and less common, and lose what little power they have.  Eventually the rot becomes so bad that nothing can be saved, and thus the whole society is ignited, and left on the ash heap of history.

For an example, let us look at the Mimes.


The Mimes were created in the darkness of the Veins.  They made stone tools and spent every day in a brutal cage-match for survival.  Whole troupes died on a single mistake, and whole societies died in hours.  It was a hard, pathetic, but mercifully short existence.  But while to us, this may seem enormously inhumane, their was no one to correct the Mimes on anything.  The Mimes did not know about the surface, as they were trapped beneath the Earth.

Then one day, an old Mime heard a voice coming to him from out of the darkness.  A younger Mime might have fled, fearing that this was some trick.  But the old Mime did not fear, he had lived a long life, and soon his troupe was likely to abandon him.  So he walked bravely into the darkness, following the sound of the voice.  The Mime followed the voice until he reached a vast, pitch-black cavern.  As he entered the cavern, the voice called out to him again, addressing him by name.  "Zavi, son of Inkull," it said.  "Extinguish your light.  This is a holy place."  And so, the old Mime, Zavi, was filled with great fear.  He extinguished his light and cowered before the great voice, fearing for his life.  "Why have you brought me here?"  Zavi asked.  The voice laughed.  "I have brought you here to make my words real.  Remember all I am about to say."  Zavi did as he was then instructed, and listened attentively as the voice described a new set of laws and statutes.  These laws governed everything from marriage and sexual relations to warfare and hunting, and even things that Zavi had never heard of, such as 'land rights', 'voting' and 'firearms'.  When Zavi asked what these were, the voice did not explain, merely telling him to record what he heard.  Then the voice said to him, "If you follow these statutes, then your people will prosper.  But fail to, and Time will devour your people."  Zavi did not know what this meant, but he remembered it very clearly.  "But why would they listen to me?  Or these laws?  Under what authority do you speak?"  At this, the voice grew angry.  "Are my promises of the 'Sun' not enough?  Do you wretched creatures not respond to rewards?  Then tell them I am the Rock upon which they stand, the rumbling of the great plates that jostle their caverns, I am the thunderous heartbeat of the Stone Sea.  I sculpted them from flesh and dirt, using spiderwebs to clothe them.  I am your patriarch, your father's father, Cascrymagog!"

And then, the voice was gone, and Zavi was alone.  He returned to his troupe later, to the surprise of everyone.  It was common for the old to walk into the dark, never to be seen again, but they did not return.  So while everyone was gathered together, Zavi told them of the laws that had been granted him by a mysterious voice.  When they heard the laws, all agreed they were sensible and wise.  And after some debate, it was agreed they would follow them.

And then, several generations later, Cascrymagog's promise was fulfilled.  For when a miner accidentally cracked open a Vein in 1906, they encountered a troupe of Mimes that was led by Zavi's grandson, Ichos, son of Melkor.  The Mimes saw the miners and attacked them, butchering them to the last.  Then, after devouring their corpses, they began to explore the mine.  When they found the other miners, they were overjoyed.  They thought they had stumbled upon a new cave-system full of soft primates, rich in calories.  They had no idea what they had truly discovered. 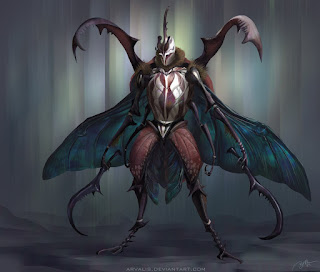 (This is how they look, I just decided)

But let's get back to theory for a second.  In the period after a people reached a stability, they begin to slide into decadence, and thus get too soft to protect themselves.  But if that period of decadence could be prevented, if that drift could be arrested early on and any attempt to moderate the discussion crushed, then in theory, a society's life span could be extended, even prolonged indefinitely.

Thus, the Angel of Preservation.  Cascrymagog sculpted them of unfeeling rock and the words of the law, which Zavi's people and all the Mimes are compelled to follow.  They are their to prevent decadence and ensure the law is being followed.  They are halfway up(?down?) the hierarchy of Cascrymagog's Angels, above the Angels of Community but below the Angels of Obligation.

Homeward Disjunction: At the start of an encounter, mark each PC's position down on a piece of paper.  If the Angel wishes to use this ability, they must wait until their next turn to use it.  The Angel will usually say something like, "You will regret advancing from where you began."  For every 10' a PC is from where they started, they take 1d6 damage.  The Angel will usually try and run away then use this ability.  Be careful.

Time Venom: When struck by this venom, the players must save.  On a failure, they take 1d6 Cha Damage.  When this Cha damage equals or exceeds their Charisma score, the player becomes locked in Time.  A person locked in Time cannot move or act, and is stuck experiencing the same moment over and over again (like Time is stopped, but only for them).  However, they also do not age or take damage in this state, and if their Time is restored, they will jump back into action as if they had just passed their save, regardless of how much time has passed.  Players frozen in time take no damage from any source.

First Start: The first d20 the players roll, that becomes their number.  For the rest of the fight, instead of rolling a d20, they may automatically achieve that roll.  They may use Luck Points to modify this roll, same as any other d20 roll.  However, every time they choose to roll a new d20, they take 1 damage (no save).

Tactics:
- Distribute Time Venom to everyone
- Use First Start to slowly wear them down
- Run, then use Homeward Disjunction 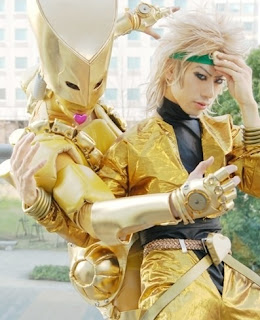 (If you know why this last picture is here, no spoilers, okay?)